A rich, readable account of the daring young men in their flying machine. 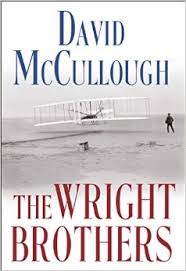 Twelve decades ago, Wilbur and Orville Wright operated a bicycle repair shop in Dayton, Ohio. It was the perfect occupation for them. And, according to David McCullough’s The Wright Brothers, “Bicycles had become the sensation of the time, a craze everywhere…Everybody was riding…men, women, all ages and from all walks of life. Bicycling clubs sprouted on college campuses and in countless cities and towns, including Dayton.”

Wilbur and Orville were seduced by motion. The advancement in transportation propelled public mobility; roads were opened, previously neglected pathways were patched up, and Dayton was on the ascent in population, professional possibilities, and prosperity.

The duo had an inventory of typical two wheelers and a cache of homemade models: the Van Cleve — available in a variety of colors — was named for their great-great grandmother, and the less costly St. Clair was designed to honor an early governor of the Ohio territories. That prescient diversification punched up long-term profitability, and expedited the employment of Charlie Taylor, a wizard mechanic who maintained the Wright Cycle Company during the brothers' future absences and their ramp-up to fame.

Ironically, the brothers might never have taken to the skies, had it not been for Orville’s near-fatal tangle with typhoid. During the long 1896 recuperation, Wilbur, the elder sibling, read voluminously to Orville. Side-by-side, they fine-tuned their knowledge of physics, mastered mathematics, and unearthed a fraternity of scientists who had tried to conquer the air.

One was Otto Lilienthal, a German glider enthusiast, who concluded “the art of flight” would proliforate after the question of bird “intimacy” with the wind was decoded. Lilienthal broke his spine pushing to discern it. Thomas Edison, Alexander Graham Bell, and others also failed to subordinate the skies.

One year before the start of the 20th century, Wilbur — fired with enthusiasm — queried the Smithsonian:

“I have been interested in the problem of mechanical and human flight ever since as a boy…I wish to obtain such papers as the...Institution has published on this subject, and if possible a list of other works in print in the English language.”

They received a plethora of pamphlets, along with Pierre Mouillard’s Empire of the Air, in which a French farmer and student of flight is warned against aeronautic zealotry because “once this idea has invaded the brain, it possesses it exclusively.”

Disregarding the advice, the Wright brothers soon constructed a flying machine that resembled a kite with a five-foot wingspan. Wilbur wrote the civil railway engineer Octave Chanute, asking about suitable locations for a test — preferably, a place with little rain and winds of at least 15 miles.

Chanute suggested Florida or California, but each was deficient in dunes for soft landings. In another correspondence to the U.S. Weather Bureau, the answer came back: Kitty Hawk, North Carolina. It was 700 miles from Dayton, and the farthest either had traveled.

During the next three years, Wilbur and Orville made repeated round trips; they tested, tinkered, and took apart various versions of their flying machines, and endeared themselves to the locals.

Then, on Thursday morning, December 17, 1903, “Five men showed up [for the public flight]. Dressed in dark caps and dark winter jackets beneath which they wore their customary white shirts, starched white collars, and dark ties, they could as well have been back in Dayton…chatting on a street corner…At exactly 10:35, Orville slipped the rope restraining the Flyer, and it headed forward, but not very fast because of a fierce headwind…the Flyer lifted into the air and Daniels [a friend], who had never operated a camera…snapped the shutter to take what would be one of the most historic photographs of the century.”

After lunch, the brothers dispatched a confidential cable to their father and sister, but the on-duty weather station operator scooped the story and hastened a “contrived” version of events to the Virginian-Pilot. Misrepresentations reemerged in the Chicago Tribune, the Washington Post, and the New York Times, and hop scotched to the Cincinnati Enquirer:

“As for the reaction in Dayton, probably not one person in a hundred believed the brothers had actually flown in their machine, or if they had, it could only have been a fluke.”

Despite the doubters, Wilbur and Orville flew 105 times in 1904. As their Ohio shows of aerial prowess became longer and slightly acrobatic, spectators gathered in larger clusters, the Dayton press was roused, and a German correspondent briefed his aeronautics publication, enthusiastically. Slowly, offers to manufacture came from Britain and France. Chanute, meanwhile, tried to nudge interest from Washington, but there was none.

Eventually, a French syndicate proposed a potentially lucrative agreement to “purchase a Wright Flyer as a gift to the French government…the brothers were to receive one million francs, or $200,000, for one machine, on the condition…they provided demonstration flights…[and] the machine fulfilled certain requirements in altitude, distance, and speed.”

Wilbur traveled to France in 1907, tended to the business details, and out-performed all of their contractual expectations. Afterward, Orville mirrored those triumphs in Washington and New York. By 1909, the world revered Wilbur and Orville, but protracted legal disputes over patents hindered airplane manufacture. The pettiness provoked Wilbur’s distress and Orville’s lonely misery.

In his earlier works, David McCullough reprised John Adams, and removed residual taint from Truman’s legacy, but with the permanently popular Wright Brothers, every single boy or girl who once-upon-a-time imagined scaling the atmosphere will feel it — now — as he or she is gently levitated by McCullough’s prose.