Blurb Your Enthusiasm: An A-Z of Literary Persuasion

A congenial consideration of the words that lure us inside the covers. 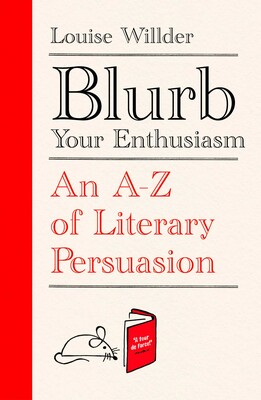 Let’s clear this up first: In the United States, “blurbs” are those friendly lines of praise adorning a book’s cover, while in the United Kingdom, the term refers more broadly to the text either on the back or the inside jacket that tells you what the book is about. So, when author Louise Willder enthuses about blurbs and the writing of them in Blurb Your Enthusiasm, she (a Brit) is mostly referring to the latter. Though American readers need not worry: This delightful ramble over the entire outer landscape of books will cover (get it?) those ubiquitous quotes of praise, too.

Willder is the perfect guide to this humble topic. Her bright-eyed enthusiasm for using words to sell yet more words is charming, and she combines her insider’s knowledge from decades in publishing with a beguiling wonder at the magic of language.

The history of blurbs stretches back to Ancient Rome, when booksellers lined the streets near the Colosseum and competed for customers by painting their storefronts with quotes pulled from the papyrus scrolls for sale inside. Once a reader picked up a scroll, they might unroll the beginning to find some reassuring words of praise for the work they were considering. Martial, a poet from the 1st century, inveigled potential buyers with this at the opening of his scroll:

“I trust that, in these little books of mine, I have observed such self-control, that whoever forms a fair judgment from his own mind can make no complaint of them.”

The oldest surviving printed advertisement in English is, in fact, for a book. William Caxton printed books in the mid-15th century, and his paper flyer tells readers they can find a particular religious handbook — its quality “well and truly correct” — at his workshop in Westminster. Willder imagines Caxton’s poster hanging discreetly on a church porch, which suggests long-ago priests would find today’s church bulletin boards rather familiar. For those of us who like to feel our common humanity across time, there’s a delicious pleasure in these echoes.

Eventually, advertisements evolved into the jacket copy we recognize today, with its blend of description and assurances in fewer than 200 words. Willder takes her profession seriously, and she includes some analysis into the intellectual “shape” of blurbs (as the narrative they present varies from specific to broad).

She also analyzes how copywriters best snag their audiences. In what at first seems like an off-track meander, a paean to Charles Dickens’ genius transitions into an analogy between good novel writing and good blurb writing. Dickens excelled at “the tension between mystery and disclosure — What’s happening here? What is going to happen?” and Willder argues that effective blurb writers elicit that same curiosity.

Book covers often include both critical praise (like from the Independent, ahem) and praise from other authors (our American-style blurbs). The latter might seem “like an endless merry-go-round of hype, mutual back-slapping and back-scratching.” But, ever congenial, Willder gently suggests that even such favor-trading can be helpful to consumers, serving as “a signal to the reader that the sort of writer they like also likes this thing.” Even if, she admits wincingly, perhaps the person praising the book hasn’t actually read it.

Some of the most interesting moments in Blurb Your Enthusiasm come from Willder’s insights into the publishing industry, including her disagreement with those copywriters who think they shouldn’t read the whole book before crafting its blurb. She tactfully shares some of the amusing experiences of her fellow copywriters, like one ex-colleague who sent an author the jacket copy for a book, only to receive a phone call from that “very day-drunk” author, who bellowed “the song ‘Hitler has only got one ball’” in response to the copy.

Sometimes, this book feels like the surprising pleasure of a mimosa with breakfast or a bawdy song after dinner. Willder’s chatty narrative invites us to giggle at silly puns while also examining their potential for social critique: “At their best, puns are a celebration of language’s slipperiness, its lack of control, its multiple meanings and its pleasures.”

These chapters flit by quickly, reflecting the habits of a concise writer. I sometimes wished she would pause a little longer to explain to us just why publishers rely on repeated, cliched designs for their covers, or what it means for humanity if narrative devices “are essential to how we function.” But her brevity also means the few chapters that feel off-target (a tangent about musical theater?) pass quickly.

In the end, Willder makes a persuasive argument for paying attention to a modest craft. If, as she says, “Every piece of copy is telling a story to somebody,” and we are all hungry for a story, then even the briefest, glossiest tales on the backs of books deserve our notice.

Carrie Callaghan is the author of the historical novels A Light of Her Own and Salt the Snow. She lives in Maryland with her family and now (heaven help her) four ridiculous cats.

By Brian Murphy with Toula Vlahou