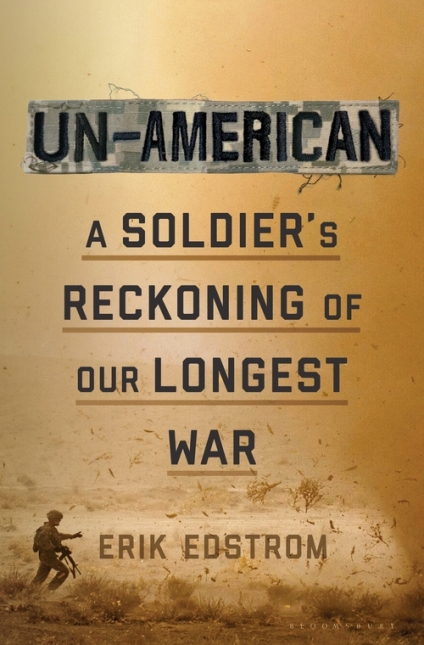 Erik Edstrom’s Un-American: A Soldier’s Reckoning of Our Longest War left me with a sadness bordering on despair, an empty feeling that burrowed into the darkest areas of my soul. It’s more than one man’s voyage into an endless war. This book is almost a journey that we all, all Americans, have been on since 9/11. In the end, we are left to ponder the question: What have we become?

Edstrom’s story begins not long after Sept. 11, 2001. He was an all-American kid living in a Boston suburb who applied to the United States Military Academy at West Point. The day the acceptance letter arrived was a time of celebration. He received a standing ovation at his high-school graduation. He would join West Point’s class of 2007.

He reports to the academy with imagery of himself as a tough soldier: “I was issued with new beliefs, new goals, new morals, and new dreams.” He wanted to be a fighter. He chafed, but not much, under the place’s culture, recalling the cadet maxim: “West point is a ‘free’ $250,000 education…shoved up your ass one nickel at a time.”

Fast forward a decade, during which friends die by bombing, bullets, and helicopter crashes. Edstrom is assigned as a platoon leader in an infantry unit; his recollections take you to the depths of hell. “The War on Terror strip-mined my soul,” he writes. The missions made no sense but cost lives anyway, American and Afghani. One mission was called Operation Highway Babysitter:

Edstrom’s most powerful and disturbing words are reserved for the cost of the war in spirit and blood. His soldier’s view from the ground is different from that of the war planners, who move squares around maps and devise tactics and strategies that serve no purpose:

“We, the most powerful, professional, and expensive army in the history of the human species, were getting wrung out, balled up, and handled by an under-whelming number of goat-herds who happened to moonlight as underequipped, part-time, seasonal fighters.”

He describes the destruction of an Afghani village by American helicopters, and the bodies of women and children chewed up by machine-gun fire in the insanity that engulfs otherwise normal, peaceful human beings in an atmosphere of legal homicide.

After witnessing the carnage, he took a shower and pondered the question of his own guilt. “Like soldiers throughout history, I, too, had been fooled by nationalism to believe that murdering people and sleeping alone was the best way to expend the prime of my youth.” After his shower, he goes for a run that lasts over four hours.

The bodies, the pointlessness of it all, the soul-robbing, ghastly moral evacuation, produced profound insights and questions into the author’s own existence. “To kill, you need moral certainty. You need to believe that the people you are killing deserve it. And when this dries up, what are you left with?”

Those words tell us where many of our soldiers find themselves when they return from war and take their own lives. It’s an abyss that civilians can never understand or imagine. A darkness that permits nothing.

This is Edstrom’s journey — one we have all been complicit in because of our country’s endless war with Afghanistan. We allow it to continue even in the face of hard evidence that America, like so many other countries and cultures, will leave nothing but hard feelings behind when we pack up and leave.

There is a lingering stench of the Vietnam War in all of this: the bright and confident predictions back home, while the soldiers and Marines in the field endure horror and disgust. This book reminds us we haven’t learned anything.

Erik Edstrom is a gifted writer, and Un-American is not just a good book, but a great book. It’s not easy to read and, for that reason, should be required at the highest levels of government.

“Teetering on the verge of insanity and enlightenment/ Introspective, microscopic thought/ Beaten and exhausted, nerves, shot/ My world is tattered, torn, and forlorn.”

These lines from his journal say it all.