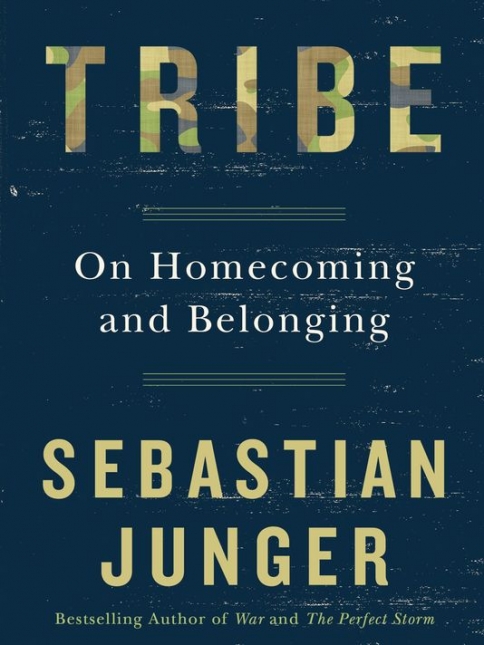 For millennia, people lived in tribes. That is, social units in which members were interdependent for sustenance and defense, explains Sebastian Junger. However, modern society has largely eliminated the need for people to demonstrate a commitment to the collective good. Impersonal institutions (markets, law enforcement agencies) meet our daily needs, from food acquisition to policing, removing the challenges to survival that our ancestors faced.

Soldiers, on the other hand, function in tribes. Every member of the unit is responsible for every other member, and each soldier must trust completely in his comrades’ willingness to protect the group. The trauma many soldiers endure when they return home, argues Junger, is due less to the stress of war than to the detachment of their fellow citizens. Accustomed to the cohesiveness of the tribe, they find modern American society cold, uncaring, and alienating.

Rather than destroy soldiers emotionally, he suggests, war strengthens them. War “inspires ancient human virtues of courage, loyalty, and selflessness that can be utterly intoxicating to the people who experience them.”

Facing a common enemy solidifies the group. Junger is not advocating more violence, but he recognizes that the inner resources on which soldiers must draw and the solidarity that gets them through combat can be life giving. He cites studies to show that there is actually no correlation between the ferocity of battle and prolonged mental illness.

In fact, the soldiers exposed to the most savagery are not usually those who suffer from long-term PTSD. “One of the reasons, paradoxically, is that the trauma of combat is interwoven with other, positive experiences that become difficult to separate from the harm.” Those who suffer negative lasting effects from their experience are often people who were already burdened by psychological problems, argues Junger.

He surmises that the upsurge in PTSD among post-9/11 veterans is due to other causes: “Since only 10 percent of our armed forces experience actual combat, the majority of vets claiming to suffer from PTSD seem to have been affected from something other than direct exposure to danger.”

Junger believes that part of the problem is bureaucratic. Because veterans no longer have to attribute their condition to a specific illness in order to be eligible for disability compensation, misdiagnosis and fraud have resulted, expanding the number of PTSD claims. This has led to cynicism on the part of the public and of other veterans, who resent those whom they perceive as milking the system. Junger stresses that most traumatized vets are not faking their symptoms, but as a consequence of the new distrust, some who do need help are reluctant to seek it.

Even taking into account cases of misdiagnosis and fraud, it is undeniable that there has been a surge in mental illness and suicide among veterans. The real reason, argues Junger, is that modern society is “so mortally dispiriting to come home to.”

Many soldiers actually miss war. “Adversity,” he writes, “often leads people to depend more on one another, and that closeness can produce a kind of nostalgia for the hard times.” Soldiers go from a close-knit group in which everyone has a purpose to a society in highly individualized lifestyles are “deeply brutalizing to the human spirit.” Soldiers who come home to situations in which there is no social support from family and community are more likely to suffer PTSD than others.

Thanking veterans for their service aggravates the problem, in Junger’s opinion. “If anything, these token acts only deepen the chasm between the military and the civilian population by highlighting the fact that some people serve their country but the vast majority don’t.” Tickets to games and other such perquisites can incentivize veterans to see themselves as victims, making their reintegration into society much more difficult.

What they really need is the one thing that will make them feel like valuable members of society: jobs. In their tribe-like military units, they each had a specific function without which the group could not perform. The worst thing that can happen to them when they return is to feel useless, marginalized. The suicide rate in America mirrors the unemployment rate, Junger points out. The best protection against devastating depression is meaningful work.

“Ex-combatants shouldn’t be seen — or be encouraged to see themselves — as victims,” writes Junger. Lifelong disability payments for PTSD, which is treatable and usually not chronic, actually debilitate veterans. In war, the passivity of victimhood can be deadly, he explains. Turning veterans into victims when they return is not only confusing but also destructive because it erases their sense of self. Instead of sympathy, “veterans need to feel that they’re just as necessary and productive back in society as they were on the battlefield.”

For the most part, Junger’s arguments are sound and convincing. My only quibble concerns his idealization of tribalism. Junger argues that tribes are by nature egalitarian, valuing women as well as men. In colonial times, he notes, some white settlers, including women, escaped from their communities to live with Indians, where they could lead freer, more meaningful lives.

However, Futures without Violence cites many examples of abuse of women among today’s tribes, and the World Health Organization has documented countless instances of female genital mutilation among African tribes. Furthermore, the tribal mentality that is so beneficial among warriors can become asphyxiating and dangerously exclusionary in other contexts.

In spite of this caveat, Tribe is an important, thought-provoking book that encourages us to see veterans and American society in a new light. Policymakers would do well to consider Junger’s arguments, for as long as we fail to fully integrate our returning soldiers, everyone will continue to pay a high toll for their service.

Bárbara Mujica is a professor of Spanish literature at Georgetown University, where she teaches courses on Teresa of Avila and John of the Cross. She has written two scholarly books on Teresa, Teresa de Avila, Lettered Woman and Espiritualidad y feminismo: Santa Teresa de Jesús, as well as scores of articles. Mujica is also a novelist, short-story writer, and essayist. Her latest novel, I Am Venus, explores the identity of the model for Velázquez’s Rokeby Venus, the painter’s only extant female nude. Her previous fiction includes the international bestseller Frida, based on the relationship between Frida Kahlo and Diego Rivera, and Sister Teresa, based on the life of Saint Teresa. This novel was adapted for the stage at the Actors Studio in Los Angeles. Mujica has won numerous prizes for her writing, including first prize in the 2015 Maryland Writers’ Association national fiction competition. This year she also won prizes for her story, “Ox,” and her novel-in-progress, Lola in Paradise. Her essays have appeared in the New York Times, the Washington Post, and hundreds of other publications.