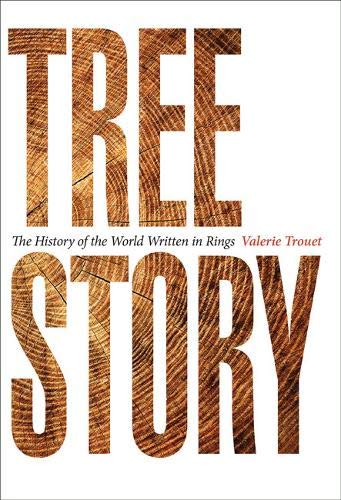 I told a friend of mine that I had a funny story recently: “I’m reading a book about tree rings — that’s not the funny part,” and she interrupted me. “Oh, no, you’re wrong. That is the funny part.”

Yet Valerie Trouet’s Tree Story: The History of the World Written in Rings is everything I had hoped it would be: intelligent, accessible, witty, and captivating — a global adventure spanning millennia and embracing a bevy of unexpected topics, all resulting from the study of tree rings. The book brims with globetrotting detective stories involving pirate ships, volcanic eruptions, the jet stream, and a Stradivarius known as the Messiah.

Dendrochronology (“tree time”) as a scientific discipline sprang up in the 1930s in, of all places, the deserts of Arizona, as a result of astronomer Andrew Ellicott Douglass’ interest in how tree rings might reflect cycles of sunspot activity. Douglass was drawn to Arizona for its clear skies; serendipitously, the dry Southwest climate also aided in preserving wood.

The astronomer’s efforts established the Laboratory of Tree-Ring Research at the University of Arizona (UA), where its continued leadership in the field drew the Belgian Trouet from a spot at the Swiss Federal Institute for Forest, Snow, and Landscape Research to her current position at UA.

Tree rings form with metronomic regularity every year, but each year’s ring differs based on prevailing conditions. Similar tree types within a geographic region consistently share patterns; experienced dendrochronologists can spot a well-known ring pattern in a core sample even before examining it microscopically.

As Trouet notes, “The longest continuous tree ring record, the German oak pine chronology, covers the past 12,650 years without skipping a single year.” When it comes to historical documentation, nothing compares with tree rings for both accuracy and precision.

That precision becomes the one constant against which so many other events and timelines can be crosschecked and analyzed. Tree ring chronologies allow radio carbon dating to be calibrated against organic material of a precisely known age; they can be used in concert with other natural record keepers — glacial ice, stalagmites, quahogs (a type of clam), fish ear bones — to form a more multifaceted understanding of both Earth and human histories.

Archaeology in particular has benefitted hugely from dendrochronology: One of Douglass’ first successes was to accurately date the ruins and cliff dwellings of the Ancestral Puebloans. Archaeologists had compared sites with each other for a relative chronology, but no one had previously been able to date the sites’ establishment or abandonment.

The discovery of one wooden beam at an ancient site in Show Low, Arizona, allowed Douglass’ team to fix a floating chronology with a definitive date, in one stroke answering a key question about an enduring mystery.

The Americas have the oldest living trees — bristlecone pines hold the record — primarily because they have been populated more lightly and for a shorter period than other temperate parts of the world.

(Anyone who was captivated by Alex Ross’ January 20, 2020, article in the New Yorker, “The Past and the Future of the Earth’s Oldest Trees,” will already be familiar with the sad story of Don Currey, the Bill Buckner* of dendrochronology. As a graduate student in 1964, Currey cut down Prometheus, which, at 4,862 years, turned out to be the oldest known living tree on earth. In 2012, a 5,062-year-old bristlecone was found; keeping its location a secret may protect it from future grad students and ancient-tree groupies.)

In comparison, Europe’s oldest tree found to date, which Trouet participated in sampling, is Bosnian pine Adonis, which clocks in at a comparatively spry 1,075 years.

Even the remains of trees hold valuable information. Four blocks from the White House, the Walker Interglacial Swamp boasts stumps of bald cypress, roots still attached, which are 130,000 years old. Paleodendrochronologists study the rings of petrified wood to understand the climates of ancient eras.

Trouet has played a significant part in several discoveries, including the linking of sunspot activity to hurricanes; the increasingly erratic wobbling of the jet stream, which contributes to extreme weather events, in the last 50 years; the mechanisms that caused both the warmth of Europe’s Medieval Climate Anomaly — which “allowed agriculture, culture, and population to flourish” — and the subsequent crushing Little Ice Age; and the connection between the introduction of Catholic missions in California and a significant spike in wildfire activity in the Sierra Nevada.

The link? The indigenous population understood the importance of keeping fuel loads low within the forests, regularly setting understory fires to clear out the growth. The Franciscans brought disease along with religion, wiping out approximately 85 percent of the indigenous population in 80 years and leaving no one to continue appropriate forest management.

In mid-May of this year, the entire eastern half of the United States experienced one of the most punishing cold snaps on record, a killing frost that damaged emerging crops. This is but one in a long and accelerating list of weather anomalies that are piling up, not necessarily “global warming” so much as “global weirding.”

The work of dendrochronologists helps put our current collective understanding of climate into the perspective of a much longer history of Earth’s climate than the human species has directly experienced. Tree Story is a true story that Valerie Trouet lays out in engaging and compelling detail. It’s worth taking the time to listen.

[*Bill Buckner infamously let a groundball roll through his legs in the 10th inning of the sixth game of the 1986 World Series, opening the way for the Mets to take the series from the Red Sox. That error overshadowed the rest of his career.]