How the West Stole Democracy from the Arabs: The Syrian Arab Congress of 1920 and the Destruction of its Historic Liberal-Islamic Alliance 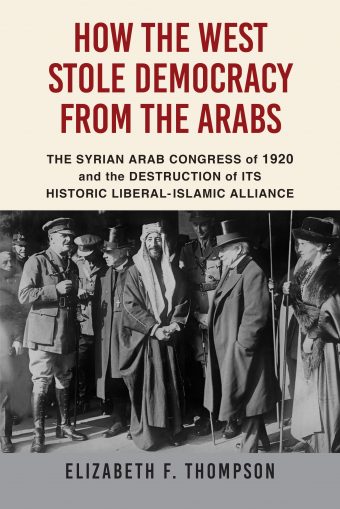 The Great War may have brought about the end of the imperial era for some, but victory has always been deafening to the victorious. While the Austro-Hungarian and Ottoman empires were dismantled in a fervor of nationalism, Britain and France saw opportunities for imperial expansion.

They reneged on promises of freedom made to secure wartime alliances; and from Middle East, historian Elizabeth F. Thompson writes in How the West Stole Democracy from the Arabs, they took democracy itself. The liberal-nationalist movement and the constitutional monarchy it supported failed because of that betrayal, and the great hope for Arab democracy remains elusive.

The Ottomans ruled the Middle East for centuries but declined after the Napoleonic Wars. European nations entered the power vacuum: Britain and France wrestled over Egypt. Former vassals also rose up against Istanbul, where a nationalist revolution in the early 20th century promised revival but led to tragedies instead.

Turkey joined the Central Powers in the Great War. The opposing countries, including Britain and France, encouraged Ottoman subjects to rebel against Istanbul. An Arab rebel army joined forces with a British intelligence officer, seeding the story we know as Lawrence of Arabia.

The Arab leader of that rebel army was Prince Faisal, who was sent to the Ottoman court in Istanbul by his father but returned disillusioned by miscarriages of justice, including the genocide of Armenians led by the Turkish government.

In Arab lands, Ottoman mismanagement led to famine and executions of Arab leaders who spoke out against the rulers. Faisal orchestrated a wartime alliance with the British governor of Egypt against the Ottomans, expecting that Britain would support the Arab right to self-rule after the war.

Even before the fighting had ended, however, the Arabs, British, and French, who had established colonial interests along the Mediterranean coast, began to vie over postwar spoils. This is where Thompson begins her story: with Faisal rushing to take control of the strategic and historic city of Damascus, which was the cultural and political heart of the Arab world.

Once Faisal captured the Syrian city, a broad coalition of nationalist and Islamist leaders banded together to support a constitutional monarchy. In March 1920, they formed the Syrian Arab Congress and created a liberal democratic Arab state. The Syrian Arab Congress brought together Shia and Sunni Muslims and conceived of a pan-Arab state that stretched from the Mediterranean coast — which became Lebanon — to Damascus and all the way to Baghdad and Persia.

But these valiant efforts failed in the face of British betrayal, French ambition, and American ambivalence. The British did not live up to their wartime promise to support Arab independence, having struck a secret deal with the French in 1916 that divided Middle East lands between them. News of the settlement emerged after World War I as the League of Nations covenant kept this agreement in place, dubbing the European spheres of influence in the Middle East “mandates,” a concept suggesting tutelage for nations supposedly unprepared for self-rule.

The efforts of the French colonial lobby were the most forceful. French Premier Georges Clemenceau, normally an anti-imperialist, became embroiled in competition with Britain over oil and influence. The more conservative government that succeeded him launched a brutal military campaign against Faisal’s new kingdom. The Syrian Arab Congress blamed Faisal for trusting European powers and for continuing to accommodate imperial demands. As the demands for defense mounted, Faisal dissolved the Congress and went into exile.

The American ambivalence was perhaps most surprising, as President Woodrow Wilson was an advocate of national self-determination and believed in the Arab cause. His position was bolstered by an American court judgment that declared Arabs to be white, an important distinction in Wilson’s mind (he saw race as a defining capacity for self-rule).

During the Paris Peace Conference of 1919, Wilson advocated strongly for Arab independence but was outmaneuvered by British Prime Minister Lloyd George and Clemenceau. Wilson’s stroke and incapacitation following his return to the United States all but ended American support for the Arab cause.

Thompson argues that the Western betrayal was ultimately rooted in race. Rather than seeing Arabs as free humans, Europeans (and likely many Americans) perceived them as inferior and therefore in need of guidance on the path to self-rule, which covered imperial ambition under the mask of help.

The author, however, shows how the leaders of the Syrian Arab Congress were sophisticated and visionary; how they managed to write a liberal democratic constitution by bringing together monarchists, republicans, and Islamists; and how they balanced regional and political interests.

The destruction of the Syrian Arab Congress, Thompson concludes, grievously hurt the chances of democracy in the Middle East. Following the debacle, Sheikh Rashid Rida, one of the leaders of the Congress, developed an anti-Western ideology that became the basis of the Muslim Brotherhood in Egypt. France colonized Syria, leaving it no chance to govern itself, and Faisal remained in exile.

The next pan-Arab movement appeared under the leadership of the Egyptian Gamal Abdel Nasser in the 1950s, but by then the tension between nationalism and Arab solidarity was too fraught for success. European powers, the United States, and the Soviet Union by then were far more interventionist in the context of the Cold War, and Arab democracy remained a side note until 2011. The Arab Spring failed as well, though, after raising hopes of self-rule in the region.

That the interests of great powers override the voices of small nations is an unremarkable observation in diplomatic history, yet reading Thompson’s account of the circumstances in one particular context, and knowing the consequences that followed, is enough to make you feel outraged once again.

A Navy SEAL and a Marine who were Naval Academy roommates become brothers in death as well as in life when buried side by side in Arlington National Cemetery.