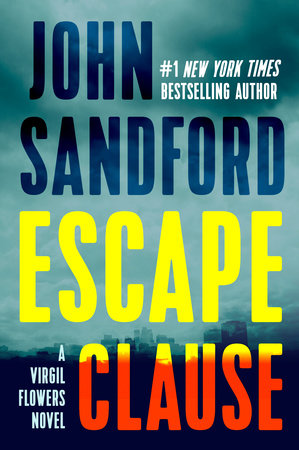 Escape Clause is John Sandford’s 44th novel. He has a large following among mystery readers, yet for some reason, this is my introduction to his writing. That’s a shame, for if the other novels are as good as this one, I’ve been missing out on a good read.

This story revolves around the theft of two rare Amur (Siberian) tigers from a Minnesota zoo. The zoo officials’ initial fear is that animal activists, opposed to the cats’ confinement, are the culprits. When it’s reasoned that these groups don’t have the resources for a well-planned operation to take off with 2,000 pounds of nasty predators, their worst fears surface: The guilty parties must be dealers in rare animal parts for use by purveyors of traditional Asian medicine.

The case is then assigned to state criminal investigator Virgil Flowers, and the chase begins. We meet a cast of fascinating characters inhabiting the environs of Minneapolis. Virgil, is his ninth book in the series, is not your average cop. Tall and lanky, he wears his blond hair long, sports cowboy boots and hat, and has an aversion to guns. Usually, before an arrest situation, he must be reminded by his fellow police officers to bring his weapon, and is admonished to not point it in their direction.

However, don't be misled. Virgil is a crack investigator. The storyline moves along at a brisk pace as he proceeds from one lead to another using his logic, intuition, and uncanny ability to recognize an opportunity to piece the puzzle together. This novel, with its unexpected twists, is a fine example of a police procedural, but that’s not all it is.

The author invites us into the very strange and lucrative world of suppliers for the practice of traditional Asian medicine. The grisly details of the preparation of animal organs, including black-bear gallbladders and tiger organs, might turn some readers off. However, this underground trade flourishes, and many endangered species are at risk of extinction because of it.

In his investigation, Virgil and the reader learn about this secret world. Who would ever know that out in the countryside some warm dairy barns house pythons, their skins destined for Italy? For a person like me who annually bowls with the Phoenix Zoo keepers in support of Save the Rhino, learning about this was unnerving.

That is not to say that this novel is a downer. On the contrary, it has been a long time since I repeatedly laughed out loud while reading a detective story. Virgil travels with some interesting people. We first meet him skinny-dipping with his girlfriend, along with her sister and her friend, a priest who takes an annual summer vacation from his duties and celibacy. As one of Virgil’s law-enforcement partners says to the group, “You know, you’re an odd bunch of people.”

The villain is Dr. Winston Peck VI, a physician who lost his license for inappropriate sexual behavior with female patients. He masterminds the caper with the intent of earning a great deal of money, selling processed tiger parts to a wealthy Los Angeles-based Chinese businessman who fled his home nation ahead of the law. The man’s feckless son is the go-between who hires two Armenian thugs to help capture and haul away the tigers.

From there, the plot gets complicated.

Peck is despicable, but as all good villains should, he catches the reader’s attention. When he appears on the page, you won’t want the chapter to end. This is not to diminish Virgil’s attraction and importance as the protagonist. Sandford has given us an excellent matchup with these two men. Virgil is a free spirit — a trait that does not always work well with someone in law enforcement, but his engaging personality catches friend and foe off guard.

Peck is psychologically unbalanced but manages to draft and plan a very complex undertaking. At one point in the story, Peck stops and tries to mentally regroup, attempting to examine his psyche following one bloody murder. Is he a psychopath or a sociopath? Sociopath, he decides, because he has a problem feeling for his fellow human beings. Having done a family history of the five Pecks who precede him in name, he finds they all had the same issue, so he excuses himself as carrying on a family tradition.

Peck pushes ahead, popping Xanax as if they were M&Ms. In between worsening lapses of consciousness, the small part of his brain not saturated with drugs stays one step ahead of Virgil and his fellow criminal cohorts until the poetic finale.

The humor makes this novel a pleasure to read. Some of it is earthy and ribald, but on the whole, is in good taste. Not all will appreciate the uncomfortable details of the trade in animal parts, but the author uses comic interludes in lieu of didacticism to introduce us to this weird world.

Arthur Kerns is a retired FBI supervisory special agent with a career in counterintelligence and counterterrorism. After retirement, he served as a consultant to the intelligence community, traveling to over 65 countries. A past regional president of the Association of Former Intelligence Officers, his award-winning short fiction has appeared in numerous anthologies. He has written the espionage thrillers The Riviera Contract, The African Contract, and The Yemen Contract.