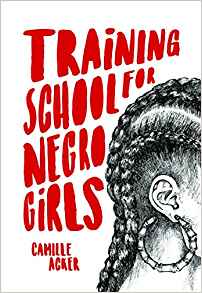 From the mansion-lined avenues of the Gold Coast to the rundown streets of Anacostia, from the 1980s of Marion Barry’s “Chocolate City” to today’s rapidly gentrifying neighborhoods of the nation’s capital, Camille Acker’s powerful, poignant debut collection of short stories, Training School for Negro Girls, takes us into the unmapped territory of the hearts and minds of a too-often-neglected demographic: black women and girls.

Divided into two parts, Lower School and Upper School, the stories range from the loss of innocence that comes so early for the African-American girl to the harsh comeuppances that their adult counterparts often endure.

The hard, terse sentences of the opening story, “Who We Are,” echo Gwendolyn Brooks’ classic poem “We Real Cool.” Portraying the defiant groupthink of a rowdy clique of high school students, it begins, “We walk down the halls like we are coming to beat you up.” In a society that seeks to strip black people of visibility and dignity, the collective “We” provides strength in numbers, and power in intimidation.

“We” act up in school, run out on the bill after eating in restaurants, and frighten people on the Metro, deliberately targeting the white lady who pretends not to be scared, who might even have some sympathy for people of color, harassing her until “she hates us because we are everything she has tried to deny that we are. We are everything she has thought but never said.”

Welcome to the confusing, contradictory world of being black and female.

From the beginning, the girl of color must grapple with the unfair disadvantage of her skin color. Even if she is talented enough to win a piano recital competition, like young Ellery Cook in the story “Cicada,” she still must bear the contempt and racist remarks of the runner up, a rich, pretty and fashionably attired white girl, who gets second place not because of her musical skills but because of her “great poise.”

In “Strong Men,” junior-high student Bit Sayers and her family celebrate brother Ronnie’s graduation from high school and acceptance to Howard University. But life is getting disconcertingly complicated as Bit’s best friend, Callie, who has discovered the power she wields over the opposite sex, seems to be drifting away from her, and Ronnie defies his parents’ wishes.

Against the backdrop of successful hometown boy Len Bias’ drafting into the NBA and tragic death two days later, Bit’s world begins to unravel. At the tender age of 13, she realizes, “Ronnie had been lying. Callie definitely had been lying and betraying. Her father didn’t want to hear the truth. Growing older meant hiding things from people and Bit felt more mature today than she ever had.”

If lying is a life lesson for the black girl, lying to yourself is a survival technique used by the black woman. Like Bess, a TSA agent at National Airport (real Washingtonians never call it Ronald Reagan) in “All the Things You’ll Never Do,” many of Acker’s adult characters convince themselves that “I know what I’m doing” when they so clearly do not.

After moving from New York to Far Northeast DC with her white boyfriend, Constance of the story “Mambo Sauce” finds herself embroiled in an effort to save her local chicken-wing place from a gentrifying developer.

When Constance persuades a TV news reporter to do a story on how bad the real estate deal would be for the community, the owner of the wing place confronts Constance:

In the eponymous story of the collection, middle-class striver Janice is desperate to join Toby & Tiffany, an exclusive social organization for “college-educated ‘New Negroes.’” She shamelessly ingratiates herself to T&T legacy members Nathan and Shelby, whose favorite charity, No to Naps, seeks to “raise money for underprivileged black children who cannot afford relaxers.”

In explaining her passion for the cause, Shelby declares, “Once we were a people who never wore our hair natural. We’ve forgotten who we are.” Janice forgets who she is, too, as she relentlessly pursues her goal, only to be stymied by that old cliché of the sexually voracious black man when Shelby walks in on Nathan making the moves on her during a party.

The “We” narrator of the first story is bookended by the collection’s lone “I” point of view in the final story, “You Can Leave, But It’s Going to Cost You.” A woman and her father drive around their radically transformed city while discussing the genius of native Washingtonian Marvin Gaye and confessing their infidelities.

The father says, “This, Marvin, is somebody telling you something important, something real personal that they can’t even believe they’re about to tell you. So, if you don’t listen, get quiet and look them in the eye and let them know you want to hear what they have to say? They might stop talking.”

By reading this moving, eye-opening collection of stories, I feel as if I have heard and understood the author’s important and very personal revelations. Please, Camille Acker, don’t stop. I want to hear everything you have to say.