Trace & Aura: The Recurring Lives of St. Ambrose of Milan

A dense, edifying look at an enigmatic holy man. 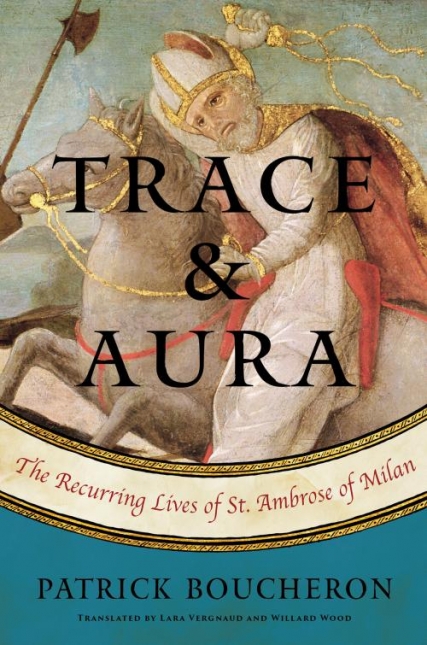 The past is indeed a foreign country, Patrick Boucheron implicitly assures us on every page of Trace & Aura: The Recurring Lives of St. Ambrose of Milan. In fact, it is even stranger and harder to lay hold of than it appears at first glance.

Thankfully, the reader who embarks upon the journey through Boucheron’s latest book, about Ambrose’s memory in Milan, could hardly ask for a better guide. A professor at the Collège de France and one of France’s preeminent medievalists, Boucheron reveals here why Milanese political history is his bread and butter.

One might, then, expect the vivid, even loving detail in which he relates the strong echoes of Ambrose’s life in events like the Lombard resistance to Frederick Barbarossa’s invasion, the tumult of the so-called Ambrosian Republic of 1447-1450, and the religio-political pressures felt in Milan during the Counter-Reformation. But Trace & Aura is more than an eminent antiquarian’s chef-d’oeuvre about a city he cherishes.

If it were, to be frank, those of us with less interest in Milan or Ambrose would invariably find the book impressive but pedantic. Instead, by tracing the memory of Ambrose — a doctor of the Catholic Church — through the communal life of a great and ancient city, Boucheron demonstrates the sorts of effects communal memory can have on our politics.

The deeper we go into the complexities of medieval Milanese life, the more we see how political necessità changes the way communities remember the revered figures who define their collective political identities. “[W]hen Ambrose emerged from the past to intrude on the present,” Boucheron writes, “it was to tell the Milanese people who they truly were.”

Few will fail to find inspiring the Ambrose who baptized Saint Augustine in Milan in 386 CE and the Ambrose who kept emperor Theodosius from the eucharist until he repented of a massacre in Thessalonica. In building the Basilica of Sant’Ambrogio and other churches, this great bishop began to forge a Christian city that could counterbalance the imperial power of Rome. His absolute commitment to the poor, political abilities, and sheer ballsiness make for enjoyable reading, and to be sure, this Ambrose does resemble in some ways the Ambroses invoked by the Milanese a millennium later.

But by the early medieval period, Milan’s ancient bishop stood not just for orthodoxy and the freedom of the church but also for the city’s civic freedoms, and which of those values is being held up at a given historical moment can be difficult to tell. Everywhere, Ambrose is depicted with his golden, three-corded whip raised over his head, one cord for each member of the Trinity. Heretics are disciplined, but so are the enemies of Milan. Thus, violence is perpetrated in the name of the one who withheld eucharist from the most powerful man in the world because of his violent acts.

In this way, the memory of a doctor of the church was appropriated and redeployed for Milan’s civil religion. “This,” Boucheron writes, “required something besides devotion: political faith, in the modern sense, meaning adhesion to a system of values and obedience to certain behavioral norms.”

How exactly were Ambrose’s name and likeness used to shape this political faith? The examples are endless: bas-reliefs depict Ambrose triumphantly leading the Milanese people back to reclaim their city after Barbarossa had conquered it. December 7th, Ambrose’s feast day, became a day favored by revolutionaries and others intent on making a political statement. Carlo Borromeo, a Counter-Reformation-era archbishop, even seems to have had the saint’s features painted to resemble his own. And these are just the tip of the iceberg. Time and again, Boucheron depicts the Milanese people “readjusting the past to a likeness of the present.” For them, that meant readjusting their image of Ambrose.

Trace & Aura offers significant rewards for those persistent enough to attain them. But to get there, the author must lead the reader through lengthy descriptions of architecture, painstaking analyses of panels on the altar in Sant’ Ambrogio, discussions of hymns and liturgy, and the histories of minor figures in Milanese politics who seem at first blush to have little to do with the subject at hand. Untranslated Latin, Italian, and German occasionally show up in the text. So do 20th-century French and continental thinkers like Derrida, Lacan, Roland Barthes, and Walter Benjamin. For those put off by such things, Trace & Aura may prove frustrating.

If you find yourself intrigued enough to follow Boucheron down these difficult and largely untraveled paths, however, you will discover more than just admiration for the author’s exquisite scholarship. There is a strange beauty in Trace & Aura that emerges amid the bewildering amount of detail, a glimpse through time’s mists of history being made. One almost feels let in on a secret about the nature of power and memory. If such evergreen insights pique your interest in the slightest, this utterly unique book is worth your while.

Joel Looper is author of Bonhoeffer’s America: A Land without Reformation.