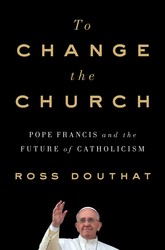 On October 26, 2015, New York Times columnist Ross Douthat was the subject of an open letter signed by over 50 Catholic professors of theology from universities across the United States and Europe. The addressee was, perhaps predictably, his boss.

“To the editor of the New York Times,

“On Sunday, October 18, the Times published Ross Douthat’s piece ‘The Plot to Change Catholicism.’ Aside from the fact that Mr. Douthat has no professional qualifications for writing on the subject, the problem with his article and other recent statements is his view of Catholicism as unapologetically subject to a politically partisan narrative that has very little to do with what Catholicism really is. Moreover, accusing other members of the Catholic church of heresy, sometimes subtly, sometimes openly, is serious business that can have serious consequences for those so accused. This is not what we expect of the New York Times.”

The “politically partisan narrative” the professors reference is doubtless the conservative, anti-Trump, and economically moderate narrative Douthat has been weaving at the Times for years now. That narrative is certainly in conflict with the often left-leaning political narrative spun by many of these professional theologians.

Douthat’s response on October 31 of that year opened with cheeky verve (“My dear Professors!”), shifted into a patient, respectful redeployment of the position laid out his previous article, and ended with what can only be described as a declaration of war.

The crux of the problem, according to Douthat, is Pope Francis himself. Little by little, through Vatican appointments and sudden sackings, pregnant silences in response to theological questions, and, above all, his recent encyclical, amoris laetitia, the former Jorge Bergoglio has shown himself to be a theological revolutionary.

Eucharist for divorced and remarried Catholics seems to be Francis’ current fancy, a position that is en vogue with liberal European bishops and Vatican functionaries but one that Catholic teaching has traditionally held to be in direct conflict with Jesus’ own words in Mark 10. If this innovation comes down the pike, Douthat and other theological conservatives wonder, what could be next? If the very words of Jesus can be set aside, what is left of Catholicism?

Then Douthat’s declaration of war:

“Now it may be that today’s heretics are prophets, the church will indeed be revolutionized, and my objections will be ground under with the rest of conservative Catholicism. But if that happens, it will take hard grinding, not just soft words and academic rank-pulling. It will require a bitter civil war.

“And so, my dear professors: Welcome to the battlefield.”

To Change the Church: Pope Francis and the Future of Catholicism is Douthat’s latest tactical maneuver in his running battle with Catholic theological liberalism. The format he chose was not that of a treatise, but something closer to his wheelhouse: a pot-boiler of a history that examines a growing ecclesial crisis precipitated by a pope who — quietly, tactfully, cunningly — seems to be contravening church teaching.

But that does not mean Douthat signed on to the professors’ terms and avoided theological claims in To Change the Church. Quite the contrary.

“Jesus dines with sinners, he hangs out with prostitutes and publicans, he evangelizes the much married Samaritan women, he welcomes thieves into eternity,” Douthat writes toward the end of the book. “But he never confirms them in their sins, or makes nuanced allowances for their state of life; that sort of rhetoric is alien to the gospels.”

Yet if Pope Francis and his allies want to create a path for divorced and remarried Catholics to receive Eucharist, Douthat argues, that is precisely what they are doing.

According to Douthat, “This is where Francis-era liberal Catholicism has so often ended up — in arguments that imply that the church must use Jesus to go beyond Jesus, as it were, using his approach to the ritual law as a means to evade or qualify the moral law, which means essentially evading or qualifying his own explicit commandments, and declaring them a pharisaism that the late-modern church should traffic in no more. To fulfill Jesus’s mission, to follow the Jesus of faith, even the Jesus of scripture must be left behind.”

One does not have to share Douthat’s theological commitments to sympathize. Everyone who orients their life toward something beyond themselves will feel in their gut his anxious love for his church.

It does help that the author considers other possible outcomes for the controversy. He even leaves open the possibility that the Catholicism of the future will somehow, someway incorporate Eucharist for the remarried.

Perhaps the church will survive this “depth charge, released to shatter the edifice of Catholic moral teaching on sexuality and allowing creative rebuilding in the rubble.” Perhaps Pope Francis and his allies will manage to change the church without destroying it.

“So yes,” Douthat acknowledges on the book’s final page, “the story could end with Francis as its hero. But to choose a path that might have only two destinations — hero or heretic — is an act of great and dangerous presumption, even for a pope. Especially for a pope.”

For Catholic and non-Catholic readers alike, that will undoubtedly be the most striking and disturbing aspect of To Change the Church: Douthat’s ringing, clear case that the destination should, in fact, be the latter.