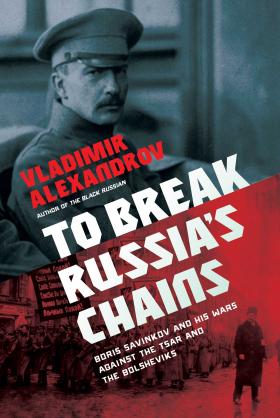 In John Greenleaf Whittier’s words, “Of all sad words of tongue or pen, the saddest are these: it might have been.” As with thwarted love, so with history. And in Vladimir Alexandrov’s To Break Russia’s Chains: Boris Savinkov and His Wars Against the Tsar and the Bolsheviks, we are offered a poignant idea of what “might have been” in the last century of history if Savinkov’s struggle for a democratic Russia had succeeded.

A world-famous revolutionary and writer who lived at an unparalleled juncture of history, politics, art, and literature, Savinkov is little-known today in the United States — save perhaps for viewers of “Reilly, Ace of Spies.” But in his lifetime, he was the leading voice for democracy in Russia, acting first against the tsarist regime and then the Bolsheviks.

Alexandrov seeks to bring Savinkov out of obscurity with this expansive tome that sets Savinkov against the sweep of Russian and European events from the late 1870s to the early 1920s. Savinkov’s revolutionary origins were his upbringing in Warsaw (then a part of the Russian Empire) by unusually tolerant and liberal parents, radicalization at his university, and his decision to become a terrorist while in internal exile.

Here, the term “terrorist” needs to be caveated. Savinkov joined the Social Revolutionaries (SRs), an anti-authoritarian cadre that saw terror as a measure of last resort (when peaceful means failed) and that was never to deliberately take the lives of innocents. These principles put the SRs at loggerheads with the Marxists (or Bolsheviks) who would ultimately take control of the country.

Although Savinkov’s terrorist plots often failed, he was instrumental in the assassinations of such hated figures as Interior Minister Vyacheslav von Plehve and Moscow’s Governor-General Grand Duke Sergei. But he was sidelined after the 1905 Revolution and spent a number of years in France as an author and journalist. A war correspondent on the Western Front during World War I, he was an ardent advocate of keeping Russia in the fight against the Central Powers.

Savinkov’s exile ended with the February 1917 revolution. Returning to Russia, he became a military advisor to Provisional Government leader Alexander Kerensky. The weak and vacillating Kerensky was no match for the ruthlessness of the Bolsheviks, however, and his government (and any hopes for democracy in Russia) was swept away by the October 1917 Bolshevik coup.

The ensuing Treaty of Brest-Litovsk with Germany knocked the new Soviet Union out of the war, and the publicly anti-Bolshevik, pro-war Savinkov found himself courted by the Allied countries. Not only “ace” Sidney Reilly but his countrymen W. Somerset Maugham and Winston Churchill were among Savinkov’s keenest supporters.

For the remainder of Savinkov’s life, he worked both within Russia and abroad to overthrow the Bolsheviks, enlisting the aid of newly independent Poland and Czechoslovakia, as well as trying to make common cause with the new prime minister of Italy, Benito Mussolini (fascism had not yet acquired its horrifying dimensions).

But Savinkov’s luck ran out. Having escaped imprisonment or death countless times, he fell for an elaborate plot to lure him back into Soviet territory in 1924. Thinking that he was going back to join forces with a vast underground anti-Bolshevik movement, he was arrested almost the moment he stepped across the border.

At his trial, Savinkov seemed to recant his anti-Bolshevik views for reasons that remain unclear today. Initially condemned to be shot, he was instead sentenced to imprisonment. But in spite of extraordinarily humane treatment, he committed suicide in May 1925.

Alexandrov’s view is that Savinkov pretended to embrace Bolshevism in hopes of being freed (and able to again work against the Bolshevik regime), and when he realized that this would never happen, he killed himself — the only way he could make clear to the rest of the world that he had not, in fact, capitulated.

Alexandrov presents Savinkov in all his complexity, particularly the blind spots which sank so many of his efforts. In particular, Savinkov could be remarkably thick in assessing other people (a trait termed by an associate as “stupid honesty,” or the fatal assumption that everyone is honest and principled).

He refused to credit considerable evidence that SR initiatives kept failing because of an overseer in the pay of the secret police, and his misplaced loyalty to the disastrous Kerensky prevented him from supporting a Russian Army general’s attempt to gain control of the Provisional Government — a move that might have saved it.

Although Alexandrov’s weaving together of the myriad details of Savinkov’s revolutionary, artistic, and personal lives is skillful, this book at times is heavy going. Such minutiae as the acquisition of false documents and funding, travel accommodations, and what the weather was doing on a particular date could have been left out. There is also a great deal of space devoted to historical dead ends — for example, an SR plan to build a “flying machine” that never got off the drawing board but which still garners multiple pages.

But the key difficulty in reading Savinkov’s story is the ultimate futility of his work and sacrifices. The tsar fell without him, the Provisional Government failed, and the Bolsheviks won out. Much of this book is given to declarations of “if these plots had succeeded, they might have changed history.” But they didn’t. If Boris Savinkov left an historic legacy outside of his fascinating life, it remains to be discerned.

Beer Money: A Memoir of Privilege and Loss