Tinker to Evers to Chance 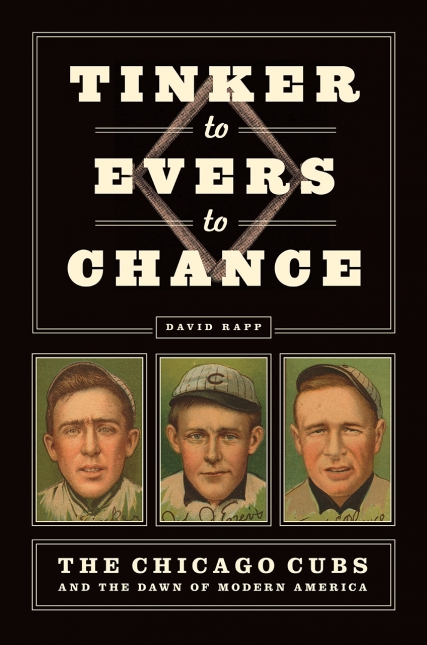 The New York Daily Mail columnist Franklin Pierce Adams was in a rush to get out of the office one afternoon in the summer of 1910 — by his own later and probably flawed account, Adams was on his way to watch a ballgame — when he was alerted that his column for the next day’s paper was a few lines short.

No problem. Adams, a Chicago native and a baseball fan, had only that morning read about the previous day’s game between his Cubs and the visiting New York Giants, fierce rivals for the National League pennant, in which the visitors were done in by a late-inning, rally-killing double play.

Armed with that knowledge, and one lyrical line poached from the box score, Adams sat down and typed:

And that was it. Eight lines of throwaway verse, reprinted in newspapers from coast to coast and eventually re-titled “Baseball’s Sad Lexicon,” that would leave generations of readers scratching their heads — “gonfalon bubble?” — or arguing that Adams had unwittingly elevated his subjects — the Cubs’ double-play combination of shortstop Joe Tinker, second baseman Johnny Evers, and first baseman Frank Chance — to an iconic status unmerited by their play.

A quick trip to the dictionary solves the first mystery. A gonfalon, Webster informs us, is a banner or flag hung from a crosspiece instead of an upright staff, usually ending in pointed streamers, and common to the medieval republics of Italy. Hence, a literate jab at New York baseball fans afflicted with mid-summer “pennant fever.” David Rapp unfurls the rest in Tinker to Evers to Chance.

One of the difficulties of putting meat on the bones of a century-old baseball tale is that there are no participants or eyewitnesses left to talk about it. And unlike presidents or poets, turn-of-the-century ballplayers were unlikely to have their letters or journals preserved for posterity.

As a consequence, the many necessary hours spent poring over old newspaper stories are apt to leave a diligent researcher like Rapp using language — “match” instead of game, or “partisans” who go “downright daffy” — that make him sound as if he might’ve been working at the desk next to F.P. Adams at the old Daily Mail.

Those bouts of quaintness, along with occasional throw-ins on how Abner Doubleday did not invent baseball, or how President William Howard Taft inadvertently invented baseball’s “seventh-inning stretch” by standing to stretch his legs at a game in Chicago, can sometimes get in the way of the larger story Rapp’s trying to unravel.

In the author’s telling, the Cubs are the good guys, the practitioners of enlightened “clean baseball” tactics like the bunt and the hit-and-run, pitted against the Giants of manager John McGraw, who take pride in intimidating umpires and opponents alike, whether that means verbal abuse or a fastball thrown behind a hitter’s ear.

But the Cubs are no shrinking violets.

When his double-play partner takes the last available carriage from the hotel to an exhibition game in small-town Indiana, leaving Tinker to trudge a dusty mile to the ballpark on foot, he calls Evers on it, then whips a ball at him from close range, precipitating a violent fistfight right there behind second base, after which the two infielders don’t speak to one another (except in anger) for…wait for it…the next 30 years!

Even Chance, by now the Cubs’ player-manager, a generally calming influence and the most admired man in the clubhouse, understands the testosterone-rich nature of the workplace. When a young sportswriter wonders what makes him such an effective leader, the onetime amateur boxer doesn’t have to think long or hard. “My ability to lick any man on the ballclub,” he says.

But Rapp’s protagonists didn’t make it to Cooperstown — all three were inducted into Baseball’s Hall of Fame together in 1946, part of a group of 11 from baseball’s previously neglected “dead ball era” — on their ability to throw a mean right hand, or on the strength of a few lines of doggerel from a yet-to-be-famous newspaper columnist.

They made it because they won. They won a lot. The Cubs of Tinker, Evers, and Chance won four National League pennants between 1905 and 1910, and back-to-back World Series in ’07 and ’08. As no Chicago baseball fan needs reminding, they’d famously go more than a century, until 2016, without winning another.

They won a single-season record 116 games in 1906; a record 530 games in five seasons; 986 in 10. More than the Yankees of Ruth and Gehrig, Mantle and Berra, or Jeter and Rivera. More than the Big Red Machine of Bench, Morgan, and Rose. More than anybody.

And, yes, Tinker and Evers did get around to reconciling.

They did all of it at a time when baseball, like the city of Chicago and the rest of the big country around it, was daring to reimagine itself in a way that would make America embrace it as the national pastime.

And if F.P. Adams imagined, as he told interviewers later in life, that he’d seen that 1910 Cubs-Giants game in the flesh, instead of reading the newspaper accounts from Chicago, it hardly makes the whole rowdy, unfathomable tale any less compelling.

Jay Price, a longtime columnist at the Staten Island Advance and Sport magazine, and the author of Thanksgiving 1959, coaches high school football in Manasquan, NJ.