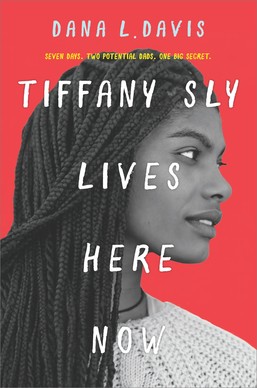 Sixteen-year-old guitar-toting, Beatles-loving, anxiety-prone Tiffany Sly finds herself facing a wholly different life from the one she’s always known back in her tough neighborhood in Chicago.

When the grabs-you-and-won’t-let-go Tiffany Sly Lives Here Now opens, the title character is flying first class and landing at LAX to meet the man who claims to be her biological father.

Tiffany’s mom, a free spirit who raised her single-handedly, has died of cancer. Tiffany’s grandmother cannot care for her, so the father she’s never met — successful California physician Anthony Stone — has been contacted. However, there is another man back in Chicago who also claims paternity, and that forms the backdrop and central dilemma in this captivating novel.

Yes, this may be a pretty soap-opera-ish start, but stay with it. It gets good. Very good.

Debut author Dana L. Davis — an actress, classical violinist, and founder of the nonprofit Culture for Kids LA — deftly weaves in other plotlines to drive the story forward. Before the DNA test results come in, Tiffany has seven days to adjust to her fancy new prep school; meet a Zen-like best friend; face the strict Jehovah’s Witness Anthony and his heiress wife; acquaint herself with her four biracial sisters (the youngest of whom has autism); and, most importantly, learn what she wants and needs from her family and herself.

In Tiffany Sly Lives Here Now, Davis draws a portrait of a smart, self-aware teenager caught between the familiar and unfamiliar. As a five-foot-11 black girl, everyone, including Anthony, believes she should play basketball. But Tiffany breaks the stereotype — she can’t play. She also breaks family rules, making friends with oddball Marcus and his two mothers across the street.

Music, not sports, is her passion. And not hip hop or rap, either, but classic rock. Airplanes and cars are her fears, but she’ll face them in order to help one of her sisters through a difficult experience with a so-called boyfriend.

Tiffany’s desire to make sense of the direction of her life, to delve into discussions of music, race, religion, God, paternity, romance, and mortality, makes this novel a terrific teen read for our tumultuous times. Hopefully, we’ll hear again soon from its author.

Caroline Bock’s debut short-story collection, Carry Her Home, will be published on October 15 by Washington Writers’ Publishing House in trade paperback and ebook. She is also the author of the critically acclaimed young-adult novels LIE and Before My Eyes from St. Martin’s Press.