Here I Am: A Novel

This ambitious 21st-century family saga is flawed but worthwhile. 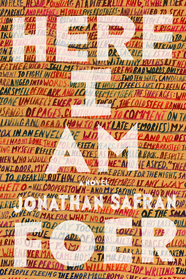 Eleven years ago, Dubya was president, iPhones didn’t exist, and Jonathan Safran Foer’s Extremely Loud and Incredibly Close was a bestseller. The 9/11 tearjerker had struck a chord with readers, and it seemed like the wunderkind author — who also penned Everything Is Illuminated — couldn’t lose.

Foer followed this period of success with a nonfiction book about vegetarianism and the meat industry (2009’s Eating Animals) and an art book that used cutout erasures of Bruno Shulz’s The Street of Crocodiles (2010’s Tree of Codes). Now Foer is back with Here I Am, his first novel in 11 years, which promises to shake readers with his ambitious, signature blend of zeitgeist and emotion.

Jacob and Julia Bloch live in present-day Washington, DC, with their three sons — Sam, Max, and Benjy — and a 15-year marriage in shambles. They used to share all of life’s intimacies, but these days their marriage operates on a steady supply of arguments, resentment, secrets, and fatigue.

They both want to return to the way they used to be: tender and accepting and open with each other, but reality seems to get in the way. Meanwhile, the boys are coping, too, each one according to his own level of awareness, while simultaneously confronting the woes and wonders of childhood.

Foer gives the oldest son, Sam, the most attention: With his bar mitzvah only weeks away, Sam gets in trouble at school for hate speech (though he denies it) and retreats into an online virtual reality called Other Life. His brothers have their own concerns, but they seem more like placeholders for the various stages of lost innocence.

When a massive earthquake hits the Middle East, an international conflict between Israel and its neighboring Arab states mirrors the Bloch family’s internal conflict. Jacob’s belligerent father, Irv, and Holocaust-surviving grandfather, Isaac, allow for Jacob’s Jewish identity to exist in a historical context, and the crisis in the Middle East becomes much more personal for Jacob.

Foer tackles familiar topics: Jewish identity, family dynamics, childhood, and how historical events shape our inner selves. Where he excels is in capturing the charming interactions within the Bloch family. With quippy dialogue and an omniscient third-person narrator, he dips in and out of these characters’ psychology as they wrestle with each other and themselves over truth and meaning.

Even their basic domestic reveries are insightful. For example, after a party, Jacob and Julia clean up the house: “Before they had kids, if asked to conjure images of parenthood they would have said things like ‘Reading in bed,’ and ‘Giving a bath,’ and ‘Running while holding the seat of a bicycle.’ Parenthood contains such moments of warmth and intimacy, but isn’t them. It’s cleaning up. The great bulk of family life involves no exchange of love, and no meaning, only fulfillment. Not the fulfillment of feeling fulfilled, but of fulfilling that which falls to you.”

Foer finds opportunities to describe the nuances of his characters’ lives with precision and tenderness, but as is common in his work, some sentences become noticeably precious and slogany: “The difference between conceding and accepting is depression.”

These types of statements aren’t really a problem. At times, they’re even profound. Unfortunately, they become distracting when the characters speak this way: “You only get to keep what you refuse to let go of.” Speech rendered with such meme-like gloss is a bit hokey, but then again, why not go for the heart? True, these moments might make the book’s world feel contrived and cute, but they simultaneously make its thematic concerns feel authentic and sincere, and ultimately affecting.

The earthquake plot never fully meshes with the family plot, aside from initiating lots of rumination and musings on Jewish identity and the complex relationship between American Jews and Israel. These ideas are processed through Jacob, and therefore support our understanding of his character, but not much else.

The unsubtle magnitude of such a global event is a bit clunky if it does little more than trigger a character’s thoughts and contradictions. The earthquake plot by itself never feels resolved or realized beyond a chapter that quickly summarizes two weeks of news coverage. It’s a conceit Foer asks his readers to accept — an overblown plot device used to gain access to the richness of Jacob’s character.

While Here I Am is Jacob’s story, his wife, Julia, is alarmingly underdeveloped. She is not given much dimension considering her role in the family, her role in Jacob’s identity, and the fact that she’s the only woman on the page (except for a grandmother who speaks a few scant lines and is given zero interiority).

We get little information about her own ideas of Jewish politics, or her and Jacob’s relationship origins. Given the length of the book, it’s surprising that we never even learn how they met. The novel’s central relationship is between Jacob and Julia, and even in the face of Julia’s flattening, their marital struggle is what will linger in readers’ minds after they’ve turned the last page.

Here I Am is full of beautiful writing and passages of family life that are moving, challenging, and astute. The story is intricate and imaginative, and despite a plot that strains to accommodate its breadth, and despite a lacking female lead, it is memorable and worthwhile.

Nathan Blanchard is an MFA candidate in the creative writing program at the University of Alabama in Tuscaloosa. His work has appeared in the Missouri Review, decomP, McSweeney’s Internet Tendency, and elsewhere.

The latest adventure of the eunuch investigator Yashim in the Byzantine world of the Ottoman Empire.