The Big Green Tent: A Novel 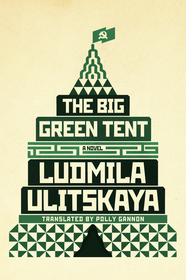 Though not exactly a household name in the U.S., Ludmila Ulitskaya is perhaps the leading contemporary voice in Russian literature today, and her fiction has won a long list of prestigious awards in addition to racking up huge sales in her home country. She is a scientist by training, having worked in genetics and biochemistry before being fired in the 1960s for dissidence (a coworker reported her to the KGB for retyping a banned book).

Lucky for all of us that Ulitskaya came to writing late, and that she published her first works after the fall of the Soviet Union; her writing would certainly have gotten her in much the same life-shattering trouble with the Soviet authorities as the characters in her most recent novel, The Big Green Tent, a story focused on the 1950s, 60s, and 70s.

There are many, many characters under the Tent, all interconnected in one way or another. Readers need to pay attention to understand where in the chronology they might be at any point in the story, since the narrative shifts back, forth, sideways, and around. Minor characters crop up again in unexpected places, creating new connections. There seems at most one degree of separation between any two characters.

We meet the primary three when they are schoolboys in the early 1950s, drawn together by their shared place at the bottom of the school’s social hierarchy. There is Ilya, the tall, brash cut-up; tiny, well-dressed Sanya, already an accomplished pianist in primary school; and Mikha, the redheaded, nearsighted Jewish orphan who joins them in fifth grade.

Two people help them weather the storms of primary school: Sanya’s beloved and cultured grandmother, Anna Alexandrovna, and the new teacher, Victor Yulievich, a one-armed war veteran who recites poetry at the beginning of each class and inspires students to become the LORLs — Lovers of Russian Literature.

There is also Olga, naively unaware of how privileged she is as the daughter of two dutiful party functionaries blessed with a private apartment, a dacha, two chauffeurs, and plenty of food delivered to their door. Upright and honest to a fault, she believes that she is truly part of the collective until, at university, Ilya opens her eyes to the greater truth of Soviet life.

By this time, Ilya has turned an early talent for photography and personal networking into a dangerous career of chronic dissidence. He produces and distributes samizdat, underground literature painstakingly transcribed by hand or typewriter and passed person-to-person and often smuggled out to the West or, in the case of tamizdat, smuggled into the country from the West (transcribing tamizdat is what got Ulitskaya arrested and fired in real life). This kind of quiet, homegrown rebellion — as well as the courage it takes and the price it exacts — is at the heart of the story.

The power of Ulitskaya’s book comes from the accumulation of details that illustrates what happens to people living in a totalitarian society, of the daily humiliations, indignities, and outright nightmares they endure. There is a suffocatingly narrow path each citizen must hew to stay in the state’s good graces, and even that is not always enough.

As a Jew, Mikha has limited options available to him. Nonetheless, he finds happiness working at a school for the deaf, until he makes the slip of talking about the wrong books with the wrong person. Both his job and his opportunity for graduate school evaporate, and he becomes unemployable. After he starts working with some of Ilya’s samizdat friends to produce a magazine, Mikha is arrested and spends three years in prison. A subsequent misstep of helping an old friend means that he’ll be sent back to prison unless he leaves Russia, which to him is untenable.

This is what life becomes for the three friends: Ilya knows he must leave the country and so he does, though it destroys his family. Sanya is desperate to leave but, as a Russian, he isn’t allowed. Mikha is invited — then encouraged, then harangued — to leave but refuses. Eventually he realizes there is one final choice he can make.

Tent is an homage to 19th- and 20th-century Russian writers, all of whom suffered to a lesser or greater degree at the hands of the state, whether pre- or post-Revolution, for their work. It is also a damning indictment of life under the Soviet/KGB boot heel where, for example, “The Soviet authorities persecuted the unemployed, including those whom they themselves banned from official employment.”

Finally, it offers a portrait of how people learn to work within the constraints placed on their existence. Anna Alexandrovna practically creates a Paris salon, with a wide-ranging collection of books and music, a piano, artwork, and a crystal chandelier, all of which are held in the state-assigned apartment partitioned from a reception hall of a former mansion, where 28 residents share a single kitchen and one toilet.

Last year, Ulitskaya wrote an article in the Guardian decrying the ever-shrinking right to free speech under the current Russian regime. She was also profiled in the New Yorker, in which the article’s author, Masha Gessen, stated with certainty, “Soon enough, your books will be banned in [Russia],” and Ulitskaya agreed, saying, “I’ll be eaten before it’s all over,” then adds, “But maybe I won’t live long enough to see that happen.”

How chilling to know that Russia’s foremost author, known worldwide, has every expectation that she is destined either to live under that resurrected boot heel or die to avoid it. The Big Green Tent is not historical fiction, at all.

Jennifer Bort Yacovissi’s debut novel, Up the Hill to Home, tells the story of four generations of a family in Washington, DC, between the Civil War and the Great Depression. Jenny is a member of the National Book Critics’ Circle and reviews regularly for both the Independent and the Historical Novels Review of the Historical Novel Society. She is also president of the Annapolis chapter of the Maryland Writers’ Association.