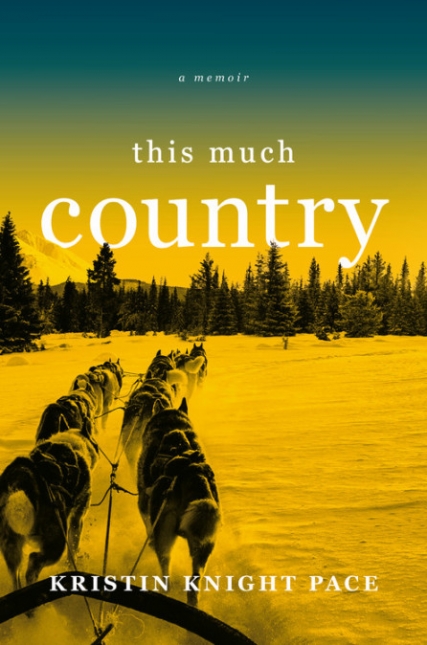 This Much Country is Kristin Knight Pace’s story of overcoming loss and disappointment to become not just settled in her own skin, but also (from the flyleaf): “One of only 31 women in the world to have completed both the Yukon Quest and the Iditarod Trail thousand-mile sled dog races.”

The story Pace tells is inspiring and offers a thrilling adventure. Unfortunately, much of the book is laden with purple prose, which, rather than draw you in, leaves you rolling your eyes. Early on, we read that “snow whipped across the ice like big white sheets curling and unfurling on a miles-long clothesline.”

Pace also tends to anthropomorphize the sled dogs to whom she has grown close, leading to the occasional groaner, such as, “I’m da best dog, Mom...I’m da very best rone.”

She dwells on her divorce from her first husband, Alfred. Certainly, his treatment of her was heartless. Their relationship has hardly had time to grow cold before he introduces a new woman into his life. However, you start to feel uncomfortable as she delineates the number of people who have taken her side in the matter: “My friend Stacey...told me that Alfred had lost all of our mutual friends. And that he had blamed it on me.”

While we may wish to celebrate the fact that she “won” the divorce, it makes for somewhat slow reading.

At different points, you start to ask yourself if you’re impressed by how much she’s overcome, or whether much of what has happened was self-inflicted. She tells a story, for example, about a bar she and Alfred took over, an investment that cost them $10,000 in a short period of time, and one which clearly was a poor gamble.

Even her initial decision to leave her family to pursue Alfred reads like every parent’s worst nightmare of an impulsive child. She and Alfred “met on the Internet. One of my girlfriends had found him on the then popular site hotornot.com.” It seems she makes several ill-considered choices like these.

Later, when she starts to fall in love with her new boyfriend and eventual husband, Andy, she must toss her current paramour, Bill, out of the house. While Bill obviously has no claim to her, you can’t help but feel bad for him, especially since Pace herself had recently gone through such a traumatic divorce.

On several occasions she, by her own admission, pouts when things don’t go her way. One example comes when a friend won’t sell her his prized dog, one to which she “obviously” is entitled: “Solo and I were meant to be together, I just knew it. This was all wrong.”

Another time, she gets irritated after reading a race’s entry requirements incorrectly. Her response? “I ordered a beer and sulked.”

Yet, there is, despite these irritants, a good adventure story here. Pace, describing her first Yukon Quest race, draws you in with vivid depictions of what she had to endure to survive and finish the event. She writes, “As I traveled over a string of frozen lakes...I felt a dangerous creeping cold.” In these chapters, her descriptions bring the story to life, rather than to a halt.

The author also excels in chronicling the challenges women face in taking on such a male-dominated sport. Here, she describes a rookie racer fending off sexual assault at the hands of locals: “One of them blocked the trail...that’s when the other one grabbed my ass and tried to pull me off my sled.”

Inspiringly, she highlights some of the women who blazed the trail ahead of her; it’s clear that she sees herself as traveling in their footsteps. And her own bravery is an example of how our mentors and heroes can drive us forward even under difficult circumstances.

Pace offers welcome analysis of how women on the trail can be supportive of each other. As she finishes the Iditarod, she does so with a friend; they cross the line together. You share their sense of jubilation at completing such a rugged, difficult journey.

Likewise, you are exuberant as you read about her being welcomed by her friends and family at the finish: “I buried my head in my dad’s shoulder and swallowed up my mom in a hug.”

If you’re looking for a good adventure story, one that tells a tale of danger and exhilaration and the beauty that nature can offer, you’ll enjoy This Much Country. It reads less well, though, as a coming-of-age tale, since the narrator is not likely to capture your sympathy.

Not that she necessarily wants to.