What About the Baby?: Some Thoughts on the Art of Fiction

A master of understated storytelling offers her insights on the craft. 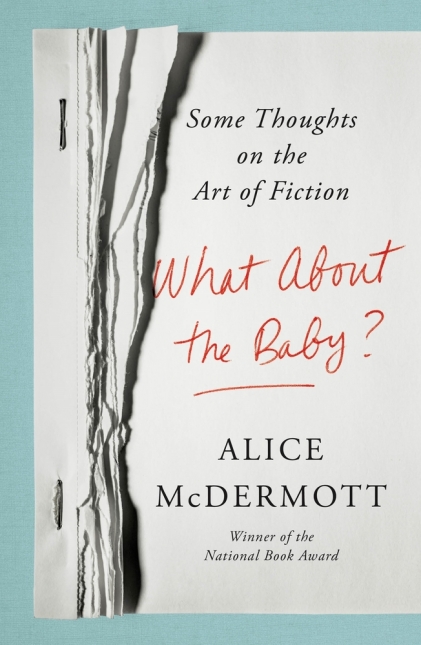 It’s a briefly rendered sketch: three rambunctious children in the kitchen, “cranky with too much summer.” An important phone call: “Tethered to the wall phone, I swiped violently at the air to silence them. Fingers to lips. Finger across the throat. Unholy motherly grimace.”

The universality of the incident makes it immediately accessible, but it is Alice McDermott’s description, her selection of detail, that makes the scene play before our eyes as though we were in the room with them.

The moment is captured in the acknowledgements at the end of What About the Baby?, a collection of essays containing McDermott’s sage advice to writers. It’s just one instance in which she shows us what she’s been telling us throughout the book. Many of the pieces here came into being during her 20 years as an instructor at the Sewanee Writers’ Conference.

The call that summer morning came from Robert Giroux, “editor of T.S. Eliot, George Orwell, Virginia Woolf, Flannery O’Connor,” and much of the rest of the Who’s Who of mid-20th-century American literature. He was asking permission to give McDermott’s phone number to Sewanee’s director, recommending her as an instructor there and saying, “I think you’ll enjoy it.”

Indeed. McDermott has enjoyed the kind of writing career that every starry-eyed would-be author dreams of, including a long-term relationship with that storied publishing house known for producing some of the best literary fiction around — Farrar, Straus and Giroux, publisher of this collection — as well as a National Book Award and multiple appearances on the Pulitzer Prize shortlist.

What’s more, McDermott has built that successful career through the telling of quiet stories about the lives of ordinary people, in which she returns again and again to favorite locales, time periods, and social milieu. For those of us who read her closely, trying to channel her magic, marveling, “How does she do that?” it’s a delight to have the author share her insights with us directly.

For the starry-eyed wannabes, this is a book to study, starting at the beginning with the essay, “What I Expect” — that is, what McDermott expects from fiction, which is what those aspiring writers must learn to deliver.

McDermott expects much from herself and others when it comes to producing fiction that is worth our time: She expects it to be memorable, inspired, compelling, and a source of surprise and delight. She expects it to obliterate time because it is timeless, a never-obsolete reflection of humanity. She expects its characters to “insist on their own authenticity.”

As with everything McDermott offers here, she tells us what she means while simultaneously, through extensive excerpts and entire stories, showing us.

In her essay “Story,” in which McDermott deconstructs the elements of a simple tale in order to discuss its component parts and illustrate how and why those parts fit together seamlessly, a primary point is that “from its first sentence, the novel has been, inevitably, heading toward this conclusion.”

She explores this concept more closely in “Sentencing,” and the criticality of a first sentence in determining and communicating where a story is going:

“The first sentence in a work of fiction places the first limitation on the utterly limitless world of the author’s imagination. Before that first sentence is composed, anything is possible.”

However, once chosen, the first sentence should carry us inexorably through to the final one, as though this had to have been the story all along.

Once again, she comes back to this notion of inevitability and the importance of an opening sentence in “Only Connect (Eventually).” Of course, writers don’t always — or even often — know how their story will end when they first sit down to write, or how they will get from the beginning to the end.

McDermott’s advice is for writers to read and re-read their work as they are writing, to be attuned to emerging and recurring images, ideas, or characterizations, “looking for consequence, looking for pattern, sowing the psychological seeds in one scene that will blossom in another, as well as culling those seeds that fail to bloom.” Finding those connections is crucial to a coherent, satisfying story that only feels inevitable once a reader reaches the end.

There is so much more here for authors to consider, study, practice, and return to: the ideas of clarity, of refining details again and again to ensure the reader can see the image the writer sees; of consequence, of ensuring the details included, down to word choice, are consequential; and of authenticity, of writers writing what matters to them, as truthfully as possible.

These are the verities that govern Alice McDermott’s fiction — always indelibly her own — and that time and again capture readers’ minds and hearts. Would-be and seasoned authors alike, take note.

Jennifer Bort Yacovissi’s debut novel, Up the Hill to Home, tells the story of four generations of a family in Washington, DC, from the Civil War to the Great Depression. Her short fiction has appeared in Gargoyle and Pen-in-Hand. Jenny is a member of PEN/America and the National Book Critics’ Circle, reviews regularly for the Independent, and is president of the Independent. She has served as chair or program director of the Washington Writers Conference since 2017, and for several recent years was president of the Annapolis chapter of the Maryland Writers’ Association. Stop by Jenny’s website for a collection of her reviews and columns and follow her on Twitter at @jbyacovissi.