The Zero and the One: A Novel

A young man’s quiet life is upended when he meets a charismatic exchange student from America. 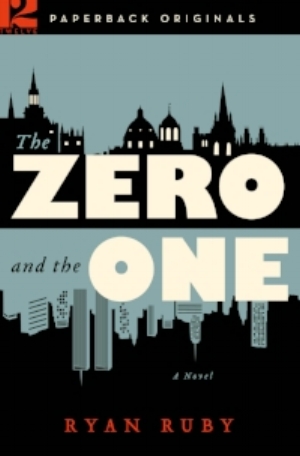 There’s something inherently tricky about writing coming-of-age novels. Perhaps it is because the task requires authors to cast themselves back into an imperfectly remembered past, or because narratives revolving around youth can veer from childlike to childish.

Ryan Ruby’s novel about a staid British college student and his risqué (and ultimately irrevocably damaging) friendship with a flamboyant American exchange student, The Zero and the One, is a good example of the challenges of this type of storytelling.

Owen Whiting is a stereotypical middle-class teen who arrives at Oxford without money or motivation. He attends lectures and does coursework mainly because he has no friends; his tutors warn him that he is “sure to graduate with a double first and a head of grey hair.”

His only interests are drinking pints at the local bar and going to concerts solo — that is, until Zachary Foedern, a charismatic exchange student from New York, pulls him into his frenetic orbit.

Their first outing is a double date with two young women, one of whom Zach has asked out via notes passed back and forth in a library. Their exchange, which Zach shows Owen, is just a little too witty and perfectly executed:

“I saw this done in a movie once. When are you free? I’d like to take you out for a drink.
“Funny you should ask. I’m free tonight, as it so happens. Do you know Freud?”
“The psychoanalyst? Or the bar in Jericho?”

The scene in which Zach bursts into Owen’s dorm room without invitation and drags him out to the bar is designed to illustrate Zach’s devil-may-care attitude, but it also gives the reader insight into the trajectory of the book — a trajectory in which Zach (his whims, his moods, his desires, and his destructive secrets) controls every aspect of his and Owen’s friendship.

It is easy to correctly predict, from those few pages, how Zach will convince the reluctant Owen to accompany him out and how Owen ultimately will be glad he did. When Owen hesitates at the prospect of embarrassing himself dancing in front of Tori and Claire, Zach pulls him onto the dance floor, explaining that “the trick is not to mind that you look ridiculous. Not to give a fuck. To dance for yourself and not for other people.”

Zach guides the conversation, buys the drinks, and flirts with the ladies. And while certain power dynamics are always at play in relationships, both platonic and romantic, those between Owen and Zach seems a bit too much like a made-for-TV movie.

To be fair, it’s possible some of the foreboding the reader senses is due to the fact that Ruby’s novel unfolds both backward and forward, a plot device that essentially gives us a “before and after” snapshot of the characters from the beginning of their friendship to the end.

Zach’s superiority and Owen’s weak-willed nature are magnified by this strategy — at the same time that we’re learning about the opening of the rift between them, we see Owen torturing himself after their final confrontation, “[F]or not stopping him. For going along with his plans. Rather than saying, when he first told me of them, That’s the daftest thing I’ve ever heard. For lacking the courage to tell him no…People are responsible not only for what they do, but what they fail to prevent.”

Novels are generally improved by the inclusion of a strong supporting cast, but most of those in The Zero and the One fall disappointingly flat. With the exception of Vera, Zach’s twin sister (in some ways his foil and as important a character as he is), the people who interact with Zach and Owen seem ill-defined, almost as if they were included as set pieces in the drama of the young men’s theater.

Despite Ruby’s efforts to make Claire and Tori seem clever and charming, Owen is not enthusiastic about Claire. In reflecting on their relationship, he muses, “I came along with Zach, Zach was with Tori, Tori came along with Claire, and so, by some transitive property of romantic logic, Claire was with me…At some point it became less awkward not to wonder whether she would let me spend the night.”

Similarly, Owen’s and Zach’s parents, who occasionally float in and out of the background, play no real part in altering the story or moving it forward.

There are moments of beautiful description to balance out Ruby’s uneven novel; most come during Owen’s reflections about what has passed between him and Zach, and during his interactions with Vera, who has a similarly complicated relationship with her brother.

Owen is most relatable with his complexities on full display — when Ruby isn’t trying as hard to portray a quiet, nerdy college kid and instead lets Owen be his own person, full of flaws and contradictions. In the end, The Zero and the One is about those human foibles and the way they complicate our relationships with one another. The book is at its best when they shine through.

This sixth installment in the bestselling series packs the same outsized punch as its predecessors.