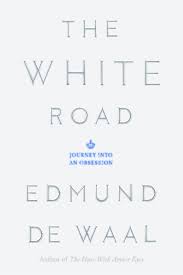 Edmund de Waal’s journey along the white road leading to the production of porcelain stretches from China to the West, from a thousand years ago to the present. It may be a journey into an obsession, but who is obsessed? Those who try to create porcelain, those who amass collections of it, or the author who sets out to explore its origins? The author, at least, appears sane and well aware of the world around him.

Having previously captivated readers with a history of his family’s netsuke collection in The Hare with Amber Eyes, de Waal now undertakes, in The White Road, an exploration of the material that can be made into white translucent vessels. He is a thoughtful guide, introducing his reader to kings and emperors, apothecaries and alchemists, philosophers and poets; visiting potters’ wheels and museum cases, junk heaps and palaces.

Porcelain — white, translucent china — has been made and traded for 1,000 years and has been present in Europe for 800 years, according to de Waal, but was not, however, produced there until the secret of its manufacture was discovered early in the 18th century. It is not made from clay that can simply be dug from the earth and fired, but is a product that requires a precise combination of two ingredients. It is the material of gifts from emperors and kings, and from President Nixon to Chairman Mao.

De Waal set out to visit the “three places where porcelain was invented or reinvented, three white hills in China and Germany and England.” Jingdezhen, China, is the site of the first white hill, where porcelain was made for 50 generations. In lieu of a map, de Waal is guided by Père d’Entrecolles, a Jesuit priest sent to China 300 years ago who wrote letters home about how porcelain was made. This hill is white with centuries’ worth of broken shards of porcelain from the factories.

In Europe, we meet a mathematician and an alchemist. Ehrenfried Walther von Tschirnhaus, the mathematician, studied in Leiden, where he met Spinoza, who gave him letters of introduction to Newton and the Royal Society in London. He went to Paris to tutor the son of Louis XIV’s finance minister, Colbert.

Tschirnhaus travelled throughout Europe, learning the use of a burning mirror to melt materials, as well as studying optics. He winds up at the court of King Augustus II in Dresden, which seems to de Waal “like a vast cruise liner, the courtiers like passengers, unable to disembark.” Tschirnhaus interests the king in an academy of sciences like the ones in Paris and at the emperor’s court in China, as well as in the possibility of manufacturing glass and porcelain.

King Augustus has also heard of a young alchemist, Johann Friedrich Böttger, who had purportedly created gold, and insists that the teenager be brought to Dresden, where he remains a prisoner for over a dozen years as the king hopes his captive goose will lay a golden egg.

Eventually, Böttger is sent to work under Tschirnhaus. No gold is made, but the two do produce a hard, red clay: jasper-porcelain. Although the king likes it, he still wants, if not gold, at least white gold — a true, translucent, white porcelain. Böttger and Tschirnhaus produce it for him in 1708.

Another journey was undertaken through southern England by William Cookworthy, who came upon the letters of Père d’Entrecolles describing the manufacture of porcelain — those letters that had guided de Waal in Jingdezhen. In Staffordshire, to the north, Josiah Wedgwood has also come upon the same letters.

Cookworthy sets out to find the necessary ingredients of porcelain. He succeeds, produces, and patents his process. Here the story tangles. Cookworthy’s business falters, as does the business of his successor. Wedgwood, however, prospers with his popular Queen’s Ware (which is not porcelain but cream-colored earthenware), and he manages to take over the source of raw materials.

These are the three journeys that de Waal planned on. And yet he takes another journey since he has come across a bit of information about Allach porcelain. This was produced by inmates of the Dachau concentration camp in the factory sponsored by Himmler to produce gifts for Nazi party rallies, for Hitler’s birthday, for Himmler’s SS friends. Its white wares were sold in shops opened in conquered cities as the armies of the Reich pushed eastward.

White, de Waal has noted, “is the colour of mourning.”

Throughout the narrative, de Waal comments on his own work as a potter. He called his 2013 New York exhibition “Attemwende,” which is the title of a book of poems by Paul Celan, several of which deal with the theme of whiteness. The title, writes de Waal, means breathturn, “the strange moment of pause between breathing in and breathing out, when your sense of self is suspended and you are open to everything.”

Photographs of de Waal’s installations show that his work is arranged in groups, and the spaces between the groups are important to de Waal: “You put a pot down and the space around it changes. You put groups of pots down and you are playing with much more complex rhythms.”

His writing style also reflects his interest in space and rhythm, with a long, descriptive paragraph often followed by one of a short, single line.

De Waal’s reading is extensive, and his curiosity reaches in many directions. The range may be mind-boggling, but if it’s a good thing to have your mind boggled now and then, Edmund de Waal is a good man to do it. If you are not familiar with the writers he mentions, you can look them up, and you will thank the author for leading you to them.

Alice Padwe has reviewed fiction, history, and memoirs and has edited all sorts of books, from college texts to spy thrillers. As a teenager, she spent a summer trying to learn how to throw pots and came home without a single one but with an appreciation for those who master the art.