A 21st-century corporate scandal meets a small-town cover-up in this somewhat flawed debut. 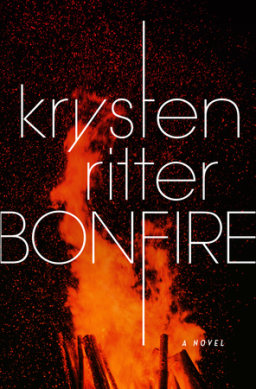 Ten years after Abby Williams left her Indiana home and a past defined by her mother’s death, she’s an attorney hired by the Center for Environmental Advocacy Work. Abby is focused on one company: Optimal Plastics, the savior that brought back jobs to her dying hometown.

But Optimal also polluted the local waters and covered up its corruption. Abby, a contemporary Erin Brockovich, tries hard to move beyond her memories of growing up and being bullied by the popular kids. Those memories are dominated by the most popular girl from high school, Kaycee Mitchell, who was once Abby’s best friend.

In school, Kaycee contracted a mysterious illness and ended up disappearing. This mystery becomes a major line of suspense in the novel: Why was Kaycee vomiting blood in the school bathroom and then denying that anything might be wrong?

There were rumors that Kaycee and a few other girls were faking their symptoms: “And it was like the whole town got sick, too, like Barrens spiraled down into the darkness with them. And all of it? A joke. A prank. All just because they felt like it. Because they wanted attention. Because they could.”

Still, Abby isn’t entirely convinced. What happened to Kaycee? Why did she disappear?

Ten years later, the puzzle remains unsolved, and Abby has never been able to let go of her suspicion that Optimal Plastics played some role in Kaycee’s disappearance.

A local farmer opens a new complaint against Optimal, and that’s the clue Abby needs to return home with the power of her law agency to root out the corruption. She’s met by the resistance of the town populated by the same people who attended high school with her but never left.

They benefit from the good-paying jobs provided by the corporation. As an adult, Abby must confront the mean girls who, “at fifteen…organized a campaign to raise money for the treatment of [her] acne.”

At the head of the group that stayed behind is Brent, the heartthrob and unrequited love of Abby’s school days. Brent works for Optimal now, and he’s invested in making sure the company maintains a clean reputation.

The more time Abby spends with Brent, the more she indulges her romantic past and loses perspective on why she returned home in the first place. She must confront her dying father, a corrupt corporation, and a complicit town while trying to figure out what happened to her ex-best friend.

When Abby discovers a dark ritual called “the Game” that connects these experiences, her life is forever changed. The past she revisits turns out to be much more sinister than she suspected. Unfortunately, this reveal is where the novel begins to unravel under the pressure of competing plotlines. A scandal of this kind is a familiar one in novels and films, as is the journey home to reckon with an unkind past that, as a wound, hasn’t fully healed.

Add to these storylines an absentee father and loyal daughter, plus a romantic fling with a single father who was the overlooked outcast in high school. Under the weight of these narratives, the structure of the book unspools. Ultimately, it would’ve benefited from a more nuanced development of the primary plot.

Author/actress Krysten Ritter, of “Jessica Jones” and “Breaking Bad” fame, succeeds, though, in providing a fast-paced suspense novel with a pithy narrator who mostly sees the world for what it is. Luckily for the reader, the narrator is a reflective one, so even when the pacing feels rushed, there are moments when Abby stops and considers her personal journey:

“Maybe all along this is what my future held — what I tried so hard to escape, and what, ultimately, is inescapable. Time isn’t a line, but a corkscrew, and the harder I’ve pushed, the more I’ve drilled back into the past.”

Pauses like this one invite the reader to care about a protagonist who finds herself in a deluge of extraordinary circumstances. Despite the novel’s tendency toward predictability, in the world of books written by celebrities, Bonfire is an engaging and edgy debut.

Sarah Creech is the author of two novels, Season of the Dragonflies and The Whole Way Home (William Morrow). Her short fiction and essays have appeared in various publications, including Lit Hub, Writer's Digest, the Cortland Review, and StorySouth. She’s an assistant professor of English and creative writing at Queens University of Charlotte.