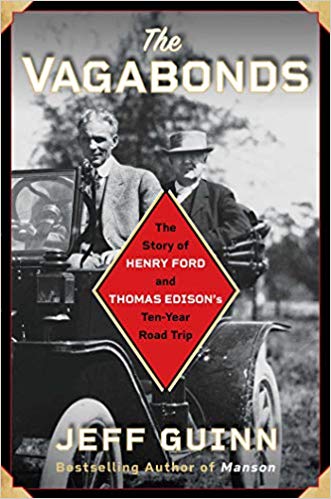 Summer is the time for road trips and fun reading. Jeff Guinn’s delightful The Vagabonds combines both in an amusing look at the decade-long history of the travels of business tycoons Henry Ford, Thomas Edison, and Harvey Firestone, and naturalist John Burroughs.

From 1914 to 1925, these four friends — pioneers of the American romance with motor travel — embarked on a series of road trips throughout the United States. Along the way, they met up with fascinating people, both famous and not. Accompanied by their wives, local officials, and even two presidents, they blazed a trail and got to know their country a bit better.

Mary Colum famously said, “I think you'll find the only difference between the rich and other people is that the rich have more money.” The adventures of these friends support this point.

During their earliest trips, they would camp in tents on open lands. In these accommodations, they mirrored the journeys of less wealthy folks. Of course, the tents were luxurious, the food sumptuous, and the lands owned by Henry Ford himself.

Those elaborate lodgings came at the expense of the more romantic media coverage Ford and Edison craved. As Guinn notes:

“Their challenge was to receive press coverage emphasizing (their commonalities) with normal Americans without drawing undue attention to the fact that they were vacationing at a luxury resort.”

Regardless, the impact these travelers had on America was profound. The early 1920s saw the inventions of Coleman stoves, pay campgrounds, trailers, drive-in restaurants, the first Rand-McNally road maps, the first parking garage, and, ultimately, the first motel. All of this was created in response to, in the words of Fortune magazine, the “restlessness of the American people.”

The activities of the vagabonds have several notable parallels to our time. Then, as now, we were fascinated by the exploits of the wealthy. Just as readers swallowed up stories of Ford and Edison, today, we read excitedly about the imaginings of Elon Musk and the daredevil exploits of Richard Branson.

The similarities with our time also extend to the political arena. Like many businesspeople who came after him, Ford had an interest in running for president. In fact, he had previously run for and lost a Senate seat. His dissatisfaction with Washington led him to the false impression that he could do better.

Also like a certain businessperson of modern times, Ford was used to having those who worked under him obey him and was quick to fire anyone he felt to be disloyal. Ford expected that, if elected president, he would bring this philosophy to the White House. A hundred years ago, however, electing such a magnate was a step too far.

For all the romance he engendered, it is impossible to see Ford without exploring his rabid anti-Semitism — yet another unfortunate parallel to the modern day. His newspaper, the Dearborn Independent, published editorials that focused on, among other things, suspicious Jewish control of “the liquor business...the loan business...the motion picture industry…[and] news distribution.” These are libels levied to this day.

Ford saw no problem with such attacks and encouraged them. Guinn writes that Ford thought the Independent was “doing America and the world a service. All right-thinking men of any faith would surely be supportive. Jews ought to feel relieved that their secrets were out and they no longer needed resorting to subterfuge.”

Even Edison gets into the act, defending his friend’s positions by stating that, thanks to years of persecution, “the trouble with the Jew [is] that…[he has]...an almost unerring judgment in [financial] affairs...He has taken too great an advantage of it & got himself disliked by many.”

Naturally, this aspect of Ford played into the prejudices of his supporters. As Guinn writes, “Ford’s antisemitism was widely shared in Middle America, where in some states even Catholics were considered exotic and suspicious.”

The Vagabonds is an evenhanded look at four men who helped define their time. Author Jeff Guinn chronicles the exciting parts of the vagabonds’ road trips and the impact they had on the populace without shying away from the profound character flaws of Ford and Edison. While not a detailed biography of these men, you get a good sense of who they were and what motivated them.

There is no better way to pay tribute to this bygone era than to treat yourself, even in these waning days of August, to a copy of this book to enjoy on the beach, by the lake, or back at home after your own summer road trip.