Superlative: The Biology of Extremes

What can we learn from the biggest, smallest, shortest, and tallest? 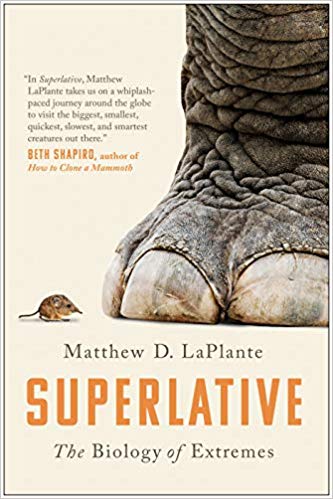 Fans of Mary Roach, Bill Bryson, and others who popularize science and nature for the mainstream reader will enjoy Matthew D. LaPlante’s Superlative, which looks at extremes in nature — extremes in size, sound, and lifespan — and the lessons we can derive from paying attention to the world around us.

Why do we care so much about superlatives in the natural world? To LaPlante, it’s a matter of public relations. He writes that such creatures “are great scientific ambassadors. And science is in dire need of ambassadors.”

Outliers capture our attention in ways the commonplace cannot. LaPlante quotes taxonomist Paul Bates: “If there’s…a hook (such as extreme size)...It’s not difficult to sell it to grant givers and the general public.”

LaPlante addresses a fundamental technical question: What is the most extreme in any given category? The answer is not as cut and dried as our binary, black-and-white minds may think. Such distinctions as large/small, loud/quiet, and strong/weak betray our own limited mindset.

What, for example, is the “loudest” creature? Is it the Ecuadorian mantled howler monkey, which is commonly considered so? Or is it the elephant, which uses infrasonic calls inaudible to the human ear that can be heard by fellow elephants over significant distances?

Likewise, we may think of the blue whale as the largest living being. But what of the Pando aspen clone, which has been proven through genetic testing to consist of hundreds of growths within a vast number of acres, connected underground? We are so stuck in our ways of seeing the individual trees that we miss the grandeur that is the forest.

There is much we can learn from our natural world, especially its extreme creatures. You can sense LaPlante’s excitement as he outlines not just the genomic overlap between elephants and humans, but also how this overlap can inform discovery of both the genetic causes of and possible treatments for cancer.

The most deadly creatures also offer cancer cures. Veratrum californicum, a plant known to provoke extreme birth defects in animals, can also be used to interrupt the cell division that defines cancer. Likewise, hemlock, used to put prisoners to death in ancient Greece, has found a secondary use in treating breast cancer.

Cancer treatments aren’t the only medical benefits to be derived from this research. For example, even the so-called “most poisonous” snake, the saw-scaled viper, provides venom that can be used as an anti-platelet drug that prevents heart attacks and unwanted clotting during surgery.

Other animals that might claim the category of “most toxic” can also be leveraged as painkillers. The cone snail, feared as so fast-killing that “if one stung you, you’d only have enough time for a single smoke before your heart stopped,” also provides a peptide that forms ziconotide, a “pain reliever 1,000 times stronger than morphine for patients with extreme chronic pain.”

We overlook these creatures at our peril.

Sadly, regardless of what these living beings have to teach us, humanity has played a devastating role in their ecosystems. LaPlante tells of how human shipping routes have stressed whales’ immune systems, leadings to a spike in the mammals’ cortisol levels. Ironically, the very human tragedy of the 9/11 attacks, and the subsequent halting of shipping traffic, has had a beneficial effect on those whales.

Worse still, we seem to be driving many creatures to extinction. In New Guinea, the P. amauensis, a miniature frog, requires round-the-clock moisture. Unfortunately, global warming has been drying out its climate, putting the species at risk.

Also at risk is the aforementioned Pando. Human housing growth in its habitat has led to improved fire-prevention techniques. Alas, “Aspen thrive in the midst of disturbance.” They need fire to curtail old growth and stimulate new. Efforts to build a habitable environment for ourselves have thrown the natural order of things out of whack.

LaPlante’s book is a breezy, fun read. Too often, science-book authors, mostly interested in proving their own intelligence, immerse themselves in minutiae and drive away readers. LaPlante’s strength lies in his ability to make you feel as excited as he is.

He has a knack for communicating with scientists and translating their expertise for the layperson. He is particularly adept at pointing us to the lessons we can learn from our natural surroundings without becoming didactic or patronizing.

At a time when there seems to be an increased divide between scientists and common folk, such a guide between both worlds is increasingly necessary. We are fortunate to have LaPlante as ours.