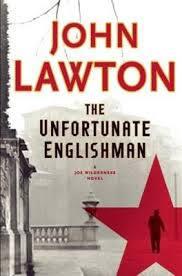 “Truth and lies were all the currency a spook needed,” says British MI6 intelligence officer Joe Wilderness in John Lawton’s new novel, The Unfortunate Englishman. In this, his second Wilderness book, the British author builds upon post-war themes and characters from his previous seven Inspector Troy novels.

In The Unfortunate Englishman, Joe Wilderness is central to a potential exchange of captured Soviet and British intelligence officers that drives a compelling plot. Lawton’s period piece, set primarily in the postwar rubble of Berlin 1947-1965, emerges as a black-and-white film, a chiaroscuro, with all the shadows and greys of moral ambivalence, and the political expediency of covert intelligence work.

I found myself immersed in the novel’s textured, believable physical setting. From achingly desperate East Germans jumping out of windows to escape to the West, to Vice President Lyndon Johnson’s visit to Berlin, Lawton’s detailed narrative planted me in the era so firmly that I could see the Bakelite clock in the Hotel Aldo in East Berlin. In that history, the Berlin Wall reflects a divided city in a taut standoff, just as Lawton’s portrayals reflect divided and conflicted characters like Wilderness, Geoffrey Masefield, and Bernard Alleyn.

The product of lower-class parents and familial dysfunction, Wilderness is as bifurcated as Berlin. While he has a wartime past of smuggling and misadventure that in many ways qualifies him for intelligence work, he finds a much-needed sense of belonging by being married to the daughter of his station boss, Burne-Jones. Yet he exists in a corrosive tension between his family and fieldwork.

In the end, he stands as much chance of losing his soul in covert operations as he does finding it as a husband and father. “Burne-Jones would never get him behind [a desk] again, and if crossing walls and bridges was the price of his freedom, then he’d pay readily. His own freedom was worth so much more than Masefield’s.”

Geoffrey Masefield, on the other hand, is a hapless intelligence officer, a wannabe who salivates at the chance to be an MI6 agent. “He…sought a life of deception, a life in which he was anyone but plain old Geoffrey Masefield from Derby.”

As a swashbuckling spy, he can have a gun, a miniature camera, and a business cover as an engineer tasked with locating Soviet nuclear ICBM launch sites. Masefield is inserted into East Germany and Moscow as part of a trade commission. His weakness on full display, he falls in love with a KGB tourist guide. Despite Wilderness’ warning to him, Masefield found “sex was not a quagmire…it was bliss. He had never felt so loved.”

Played by the Russians, Masefield is set up, arrested, and sent to Lubyanka, the KGB headquarters in Moscow.

Apprehended by British intelligence in 1959, KGB mole and captain Leonid Liubimov, aka Bernard Alleyn, is English in every way. Rising to a senior position in the Directorate of Military Operations and Intelligence in London, he is married with two children. In considering whether the captured Alleyn is a traitor or spy, Wilderness opines, “I think he’s an Englishman…an unfortunate Englishman. He is…acculturated.”

The job, then, falls to Wilderness to use his resources — friends and foes alike — on both sides of the Wall to plot the exchange of Alleyn for Masefield, to make up for past mistakes, and to avoid the condition found in displaced postwar Europe and divided Berlin — Hinterbliebenen. “The word gave him pause. So deliberately chosen, so complex in its meaning, invoking loss, bereavement, abandonment…those left behind.” He has to extract Masefield.

Lawton uses deprecating and ironic humor to tease out the complexity of his characters, to make them real and sometimes painfully familiar. Through Lawton’s restrained and focused dialogue, we, like Wilderness, begin to care about them. For example, in response to his wife, Judy, questioning his seriousness in their intimate conversation, Wilderness says, “Yes. We have entered serious mode. I heard the click.” Or about his co-conspirator Russian Yuri Myshkin’s death, Wilderness offers, “He had his good points. They’ll be interred with his bones.”

As a spy novel, The Unfortunate Englishman is quite a good read. In the end, John Lawton has created a work that tugs the reader’s affections as his spies do their work with their currency of truth and lies — all, as Lawrence Ferlinghetti once wrote, “without mistaking any thing for what it may not be.”

The Sixteenth of June