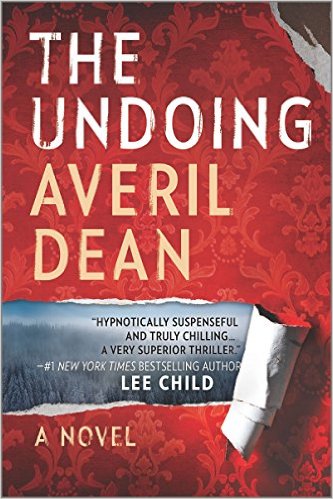 What am I doing reviewing a book from an imprint that bills itself as having “the brightest stars in women’s fiction”? Hey, if Lee Child could offer such strong praise for a novelist’s work, I had to give it a chance. I’m glad I did. Dean’s new offering, The Undoing — which follows Alice Close Your Eyes in 2013 — is a dazzler.

To my mind, it’s not “chick lit” at all. Though certainly the work of an extremely talented woman writing primarily for women, this psychological thriller crosses the line into literary fiction. Stylistically and structurally, it is a mind-bending and mind-opening experience. There is little “feel-good” here, rather a mountainside filled with pain and understanding.

Structurally, Dean puts together a backward walk from disaster to its genesis. In the tiny town of Jawbone Ridge, Colorado — near fabled Telluride — a trio of young adults has been murdered. Essentially, they have turned on each other after a short lifetime of living together intimately in almost every way one can imagine.

No, we do not enter at the time or the scene of the murders, but years later, we look over the shoulder of Julian Moss, a once-renowned skier who had been inside the same circle as the core trio. He has been drawn back to the Blackbird Hotel, which was the enterprise and home of the people who died there. From this scene, set in 2014, Julian leaps to his death after re-reading a note that has haunted him for years: “Julian — I know what you did.”

The note is from Celia, the central and most elusive figure in the novel. Raised with her action-oriented stepbrother, Rory, she formed an eerie symbiosis with him from childhood that turned stressful and dangerous in their teen and young adult years. The relationship was complicated by the third partner, Rory’s best friend, Eric. Eric, more an intellectual type, loved both Celia and Rory in complex ways.

These friends, a holy trinity of some sort — and ultimately an unholy one — were also competitors, vying for dominance through need and manipulation. The young men were lured to participate in Celia’s vision of owning and operating the Blackbird Hotel. Celia’s esthetic stamp is on the furnishings and decoration. Eric’s money allows her vision to be realized. Rory supplies the construction skills needed for repairs and improvements.

The three, for a while, live Celia’s dream. In 2009, the fulcrum year of The Undoing, disaster befalls their relationship.

As the note suggests, Julian had upset their equilibrium. His negative momentum took the small chinks in the ties between the three mutual lovers and widened them. They had something he needed to be part of, but couldn’t.

After introducing the fatal year of 2009, the author takes us several steps backward in time. Scenes set in 2008 help us understand 2009. A late 2007 scene presents the beginning of a relationship between Celia and Julian, who is considerably older than the other three. July 2007 includes Eric’s purchase of the Blackbird Hotel on behalf of himself, Celia, and Rory.

Then the narrative plummets backward to 2003.

You get the idea.

All along the way, Dean examines the ineffectual parenting and the destructive blood relationships in which the members of the trio were raised. These configurations are central to a dizzying interplay of causes and effects: tendencies, blocking forces, and outcomes.

All elucidations, however, remain cloaked in mystery. This is a haunted terrain, inner and outer. Dean is skillful at registering tumultuous qualities of experience involving yearning, obsessiveness, compromised wholeness, thwarted or abandoned purpose, and direction. She uses a poetic prose that is not in the service of glamorization; the author evokes a deep, romantic sense of gloom and doom. It clouds the landscape, the architecture, the individual and collective psyches. It is powerful and convincing. Sometimes it’s almost intolerable.

Are these sympathetic characters? It’s hard to say. Understanding the streams of neglectful or abusive parenting that ran through their upbringing, readers could find themselves sympathetic to Celia, Rory, and Eric. Or is it that their natures were so locked in place by fate or DNA that the exercise of free will and moral judgment was handicapped or thwarted altogether?

Readers may be left pondering these issues of character and destiny long after they are shocked and frightened by what transpires in this highly inventive, morbidly addictive, and poetically rich novel.

This Is Your Life, Harriet Chance!

Walking game-show style through her past, a woman is forced to recount the many roads not taken.