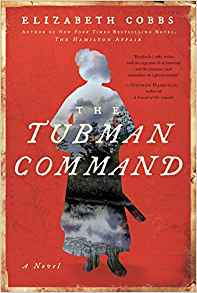 Most Americans have at least a passing knowledge of the U.S. Civil War: North vs. South, Grant vs. Lee, abolitionists vs. slave owners. And history classes offer a cursory overview of Harriet Tubman — arguably the most famous female figure from the War Between the States — noting her brave efforts to smuggle slaves to freedom via the Underground Railroad.

However, most lessons stop there; few Americans know much about Harriet the person. In The Tubman Command, Elizabeth Cobbs seeks to remedy that, going beyond documenting the escaped slave’s work as a nurse, scout, and spy and offering a fictionalized account of Harriet’s life leading up to and during the Combahee River Raid.

As Cobbs notes, “In the past, chroniclers didn’t think it was especially important to document women’s deeds. Even now, we tend to assume they didn’t do much and disbelieve the evidence that they did.”

In many ways, it is remarkable that Harriet Tubman made it into the history books at all, given that era when both women and people of color were far from being considered the equals of whites. The Tubman Command rights this wrong and offers a small glimpse into Harriet’s life and the sacrifices she made.

Throughout the intriguing novel, Cobbs details Harriet’s struggles as a slave, an abolitionist, and, above all, a woman. Ironically, being female helps her in unexpected ways, such as during fraught moments when she must quickly gain her charges’ trust:

“A brave woman would shame reluctant men and give courage to mothers and girls...Slaves must decide in an instant whether to trust the Yankees or obey the tyrants who held guns to their backs. A respected woman could make all the difference.”

Still, Cobbs does not overlook the fact that Harriet’s sex could, understandably, also be a detriment. That Union officers trusted her to help lead the Combahee raid is a testament to her verve and sensibility.

The novel includes a fictional relationship between Harriet and Samuel, an escaped slave who plays an instrumental role in the raid. The relationship humanizes her; rather than a sexless heroine, Harriet is a woman who wants to be loved and harbors the same desires as anybody else. She “wasn’t made of stone. She was so human it ached.”

While Cobbs largely focuses on Harriet the woman, she doesn’t neglect the cruelties Harriet suffered and witnessed as a slave. As an adult, Harriet still mourns the loss of sisters sold off, and she agonizes over her separation from her daughter, Margaret, whom she gave up to be raised by free blacks.

Her longing for her daughter “could wake her from a sound sleep, kill her appetite on an empty stomach, and cause her to break off in the middle of a conversation.” Harriet is particularly tormented by shame over leaving Margaret partly out of her own desire to continue her important work.

Along with agonizing during the Combahee River Raid over whether soldiers should torch the plantations that, for many slaves, are the only homes they’ve ever known, Harriet also struggles with the betrayal of John Tubman, her first husband, who refuses to accompany her on the Underground Railroad:

“Why wouldn’t he go with her? She’d tried so many different ways to phrase the question, this way and that, though she knew all of them made him feel weak. If she wanted to be his woman, she needed to let him be a man. Or so Mama said, and she had been married to Harriet’s father nearly three decades.”

Humanizing moments like this make The Tubman Command both poignant and inspiring. Through her compelling narrative, author Elizabeth Cobbs offers a nuanced, mostly factual portrayal of a real-life woman who has rightfully achieved mythical status. Because, for all the ways in which Harriet was an ordinary human being, she was even more so an extraordinary one.

Jennifer Showell-Hartogs is an avid reader, world traveler, and a federal employee. She resides in Arlington, Virginia, with her husband, daughters, and dog.

By Sten Nadolny; translated by Breon and Lynda Mitchell