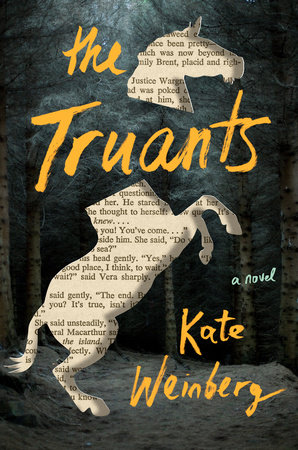 This impressive debut from Kate Weinberg is a collegiate coming-of-age story entangled in a snarl of secretive goings on — some nearly a century old, others a few years past, and a few chillingly present. All of them intertwine to great effect in a cleverly constructed tale of passionate duplicity, mysterious absences, and sudden death.

The Truants opens affectionately enough, nudged on by the minor tremors of post-adolescent infatuation in Jess Walker, its impressionable narrator. Jess has enrolled at the University of East Anglia, an educational backwater in elite British eyes. She has come to study with her idol, Dr. Lorna Clay, an expert on rebellious woman writers and, significantly, Agatha Christie.

Lately resigned from the University of Cambridge, the beautiful Lorna, it turns out, has been driven to the academic hinterlands by a shadowy scandal, its precise details unknown.

Mystery maven Agatha, another focus of Jess’ beguilement, looms large in the story, partly by reason of Agatha’s strange — and real-life — two-week disappearance in 1926. It has never been fully explained, although her husband’s adultery has been said to figure somehow. The resulting furor among Agatha’s fans blew up into quite the frenzy among contemporary English journalists.

On its own, this oddly circumstantial triangle seems to promise a tortuous tale of parallels and reversals: the wide-eyed ingenue, the beautiful and mysterious academic with her own murky past, and the presiding spirit of Agatha, renowned for her brilliantly twisty plotting and her nonpareil expertise in poisons both familiar and recondite.

Weinberg doubles down on this setup with Jess’ dawning enthusiasm for two new friends: the rashly adventurous gal-pal Georgie and the reputedly adventurous Alec, a South African journalist who sets Jess’ heart aflutter, even though he’s romantically paired with Georgie.

Do you feel an Agatha-esque whodunit rattling the tin thunder sheets in the wings?

If cleverly managed foreboding of the romantic-staple variety is your thing, you’ll find it here in wondrous excess, from the gorgeous black swans at Georgie’s ancestral demesne (“Don’t be fooled…those bastards will come after you and break your legs”) to the Byronic Alec’s periodic and only partially explained absences.

Jess herself gives the game away: “No hint of the landscape of my mind, which was dark and obsessive. No hint of the weather to come.”

The horizon is stormy and threatening indeed — though never quite collapses into creaky conventionality — as this mystery finds its stride, revealing a machinery of betrayals, vanishings, abrupt disillusionments, raw unmaskings, and, above all, romantic triangles. Or, more correctly, curiously intersecting triangles hinting strongly at furtive murder unpunished.

Late in the novel, Jess’ mentor, Lorna, takes her away from the bleak unpleasantness pervading campus to an unnamed island off Sicily. Seemingly free of care, they luxuriate in the sun:

“Side by side…surrounded by the sound of the island, the insect noises among the grasses and the drone of fat bees. And afterward, we lay back in the shade of a nearby tree, drowsy, replete, our widespread arms inches apart as we gazed up at the blue sky. Empty, except for high little wisps of clouds, like lambs’ tails.”

Kudos to Kate Weinberg. This is a marvelously crafted, skillfully timed moment that promises escape and a remission of Jess’ troubles. It’s a Virgilian pastoral allusion with echoes of Yeats’ “bee-loud glade” from “The Lake Isle of Innisfree.”

The hopeful atmospherics here are ironic inversions of those in the novel’s England scenes. Do they hold, or are there more brutal unmaskings to come? Bet on Dame Agatha for the answer.

[Click here to purchase The Truants from indie-supporting Bookshop.]