The Trip to Echo Spring: On Writers and Drinking

Shining a light on the relationship between authors and alcohol. 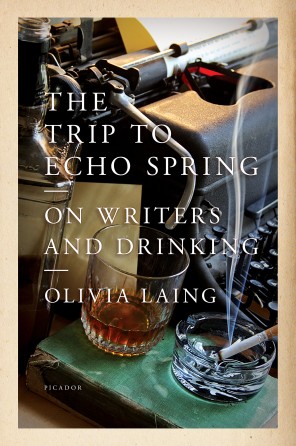 The title of Olivia Laing’s book, The Trip to Echo Spring: On Writers and Drinking, suggested an unhappy story, especially unwelcome during the bleak months of winter.

The story is sad, but in Laing’s deft hands, her examination of the writing lives of F. Scott Fitzgerald, Ernest Hemingway, Tennessee Williams, John Berryman, John Cheever and Raymond Carver, all of whom struggled with alcoholism while producing some the most acclaimed literature of the 20th century, is very appealing. (Laing is not male-bashing. She acknowledges she explicitly excluded female candidates and explains why.)

One look at the cover and my interest grew. The artwork is a depiction of a typewriter with partially completed page visible, an almost empty glass of whiskey and a cigarette wafting a ghostly plume of smoke from an ashtray. It sets the scene of a writer at work with the iconic symbols of the solitary writing life, drink and smoke, nearby. The first chapter breezed by, and the second, and I was swept away by Laing’s use of well-placed anecdotes, her lyrical prose and relevant plot summaries of the writers’ major works. As I became more immersed in the book, the whiskey and cigarette on the cover art took on new meaning as crutches for the wounded lives I was reading about.

These are not typical birth-to-death biographies. There is not much new in the basic outlines of these famous lives. Laing’s contribution is adding the perspective of the relationship between the writers’ work and alcohol abuse. Using their own words — who better to describe the affliction than those who who suffer from it and also are talented writers? — she chronicles their efforts to deny and excuse their alcoholism and its deleterious effects, which sadly only serve to highlight the tragic and insidious nature of the disease.

Laing travels by train from New York, to New Orleans, on to Key West and ends in Port Angeles, Wash., seeking out the homes and vacation spots of the six men. Her objective is to understand what made them drink and what it did to them, how they experienced it and thought about it. That is the literal trip. The trip to Echo Spring is also a figurative journey, drawn from a line in Tennessee Williams’ Cat on a Hot Tin Roof, referring to the liquor cabinet.

Laing ruminates on the three-way relationship of childhood experience, alcohol and writing, and finds a common element: “a hidden relationship between the two strategies of writing and drinking and that both had to do with a feeling that something precious had gone to pieces, and a desire at once to mend it … and to deny that it was so.” She does not repeat the cliché of art as born from suffering or the easy conclusion that an unhappy child becomes an alcoholic adult. As she notes, not every alcoholic can produce the equivalent of The Great Gatsby.

Each author felt his own unique terror and turned to alcohol for comfort, for a complex variety of psychological and physiological reasons. Carver felt, as he described it, “spiritually obliterated.” Williams suffered from anxiety about his health and sex life.

Along the way, Laing infuses the narrative with tidbits like a night Fitzgerald spent in a Roman jail informing a scene in Tender is the Night; Cheever seeing hookers playing hopscotch with a room key on a street in New York; and Hemingway being inspired to write A Movable Feast after his doctor put him on a low-alcohol diet — five ounces of whiskey and one glass of wine a day.

The author’s eye for detail extends to the physical world. Laing describes the East River “pleating in little folds of blue and gold.” Out of the train window she sees “a clearfell, melancholy as a whale graveyard.” New Orleans, as she approaches from the east on the train, looks like a “floating city” rising from the Mississippi Delta.

At the beginning of her trip, Laing interviews the director of the Addiction Institute in New York and visits an AA meeting. I found the clinical description of alcoholism a bit pedantic and the recitation of all 12 steps of AA’s method unnecessary to make the point that a spiritual awakening is a critical aspect of that recovery process.

Laing also explains that her interest in alcoholism stemmed from her own childhood in an alcoholic family and then tantalizes with the statement that her adult life has also been “full of them [alcoholics].” Is there another story here? These are, however, small criticisms of a book that will have wide appeal beyond readers interested in these specific authors.

The sorrow in these writers’ lives is palpable, but their works are monuments of modern literature. Laing lays bare the tumult their lives and in doing so gives us her own beautifully written book. It is well worth the read.

C.B. Santore is a freelance writer and editor in Fairfax, VA.