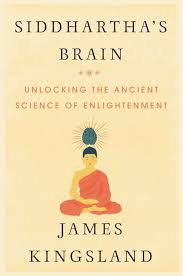 Two-and-a-half millennia ago, near the border of Nepal and southern India, there lived a prince named Siddhārtha Gautama. From the time Siddhārtha was a small boy, his father, the king, shielded him from all discomfort and woe. Siddhārtha grew up to enjoy every pleasure that health, wealth, and privilege could provide. He lived in palaces, had a beautiful wife, and eventually became the father of a precious little son.

But in his 30th year, Siddhārtha had a revelation: A life of beauty and ease could not prevent him from experiencing the realities of human existence — illness, decline, and, ultimately, death. He renounced his legacy, gave up his worldly possessions, and dedicated himself to attaining “the ‘incomparable peaceful state’ of spiritual enlightenment.”

Science and medical journalist James Kingsland relates all of this and more in Siddhārtha’s Brain: Unlocking the Ancient Science of Enlightenment.

Most of us know Siddhārtha Gautama by another name: the Buddha, the ascetic sage whose life experiences and teachings formed the foundation of Buddhism. In this enlightening read, Kingsland weaves together the historical story of Buddha, the man, with a discussion of meditation and other mindfulness practices. Both have improved quality of life across time and culture and remain relevant in modern brain science and psychology.

Kingsland, who has written extensively for the Guardian, Nature, and many other publications, begins by quoting a renowned Buddhist teacher’s assertion that “we are all mentally ill.”

In other words, the issues we grapple with — anxiety, isolation, and addictive behaviors — exist on a continuum, where some struggle more than others.

Practices such as meditation can help. And as we see these techniques used widely from the hospital to the boardroom, Kingsland notes that the dividing line between spiritual guidance and clinical care is hardly clear-cut.

The Buddha said, “We are what we think. All that we are arises with our thoughts. With our thoughts, we make the world.” Modern neuroscientists who study plasticity of the human brain would agree. There is ample evidence that, throughout our lives, we form new nerve cells and synapses, transforming how we see the world.

Neuroplasticity is just one of the research topics Kingsland discusses in Siddhārtha’s Brain. From ongoing scientific studies and observation, he makes a compelling case that living nonjudgmentally in the present moment can cultivate proactive responses to psychological challenges. Accordingly, accepting our thoughts and feelings as they are (the cornerstone of Buddhist practice) is a viable path to emotional serenity.

Among many examples, meditation is shown to be effective in treating depression. It can also help us distinguish between the physical sensation of pain and the story we tell ourselves about it. Meditation enhances our ability to observe negative thoughts and feelings as the fleeting events they are, and not as the grand events that define us.

It’s fascinating to read about the changes observed in the brain scans of meditators, whose measured brain activity reveals how they expertly direct their focus and attention. With repeated practice, brain networks can be strengthened “so that present-moment awareness can be achieved with greater ease until it becomes second nature.”

Unfortunately, Kingsland notes, no long-term longitudinal study yet exists that tracks the potentially transformational changes in the brains of people who have meditated for decades, although a few such studies may be in the works.

Buddha said, “Thousands of candles can be lighted from a single candle, and the life of the candle will not be shortened. Happiness never decreases by being shared.” In Siddhārtha’s Brain, Kingsland has shared not only compelling ideas about how to enhance wellbeing, but ample resources to guide us there.

Paula Novash writes and edits books, articles, and journals in fields that include medicine, linguistics, philanthropy, and neuroscience.