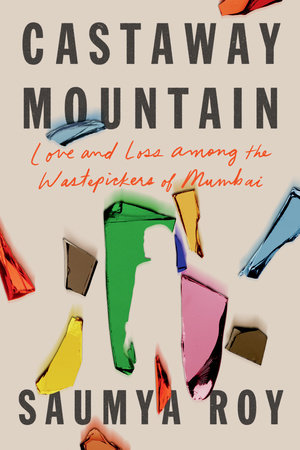 As you read the first chapter of Castaway Mountain: Love and Loss Among the Wastepickers of Mumbai, you may think you’re reading a novel with an improbable premise. But this is a true account of people in India who literally live on, and make their living from, other people’s garbage.

Their shelters (they are by our standards far from houses) are made of scraps culled from the trash, built on barely reclaimed marshland filled in with trash and located on the edges of dumping grounds for trash piled as high as a mountain. The people who live here survive by picking through the trash to find items they can sell or eat. Plastic bottles, discarded medical-supply bags, and scrap metal and wire are especially valuable because they can be sold to trash traders.

Castaway Mountain refers as much to the mountain of refuse as to the people who call it home. The trash pickers of Deonar township, on the outskirts of Mumbai, rarely interact with the larger population of the city whose detritus is dumped here. They lack political influence in the municipal government. Mumbai and Deonar are “in different worlds,” according to author Saumya Roy.

Roy first met one of Deonar’s pickers when she was managing the small, low-interest loans her foundation gave to the city’s poorest businesses. In researching the work of a prospective client, Roy went to see Deonar firsthand, beginning an eight-year relationship with the pickers. She tells the story of Deonar through the life of a young girl, Farzana, as she grows to womanhood.

Farzana is the sixth of nine children, the brightest and most industrious, the one with perhaps the best chance of escaping the mountain but also the one who most loves it. The lure of the mountain’s “treasures,” coupled with her apathy for school, constrain what limited options she has. Stubbornness, ingenuity, and strength of spirit sustain her through what would be a harrowing life by any standard. Yet her desire to remain on the mountain never diminishes.

Roy interweaves accounts of the legal battles to eliminate the dumping site with personal stories of Farzana and her family and friends. As lawsuits wind their way through the frustratingly slow Indian court system, hampered by an at best desultory — and at worst blatantly — corrupt bureaucracy of local and regional officials, Farzana and her family worry how they will live if dumping is curtailed. The end of the mountain would mean the end of a way of life for the pickers.

The area first became a trash site in colonial times when then Bombay’s refuse was delivered to the area by special train. In the 1960s, the government began offering homesites to its poorest residents on the marshy fringes of the city near the dumping ground to make way for new construction in the city center.

Now a constant stream of dump trucks delivers loads to Deonar throughout the day. Pickers learn the origins of the trucks and follow those from the richest neighborhoods so they can be first to scour the haul for the most valuable spoils. This often involves well-timed moves on the slippery and shifting heaps to avoid being run over by the trucks or the bulldozers that plow the piles of trash.

The trash mountain, as high as 120 feet in places, is dangerous. Pickers are routinely cut (and often infected) by broken glass, metal fragments, and rusty nails. Spontaneous fires erupt from the compression and decay of the garbage, fouling the air and corroding pickers’ lungs. Avalanches are not uncommon. Police enforcement of barriers erected to keep the pickers out is lax and readily overlooked for a bribe.

The mountain is its own ecosystem. It has its own black market and its own extrajudicial system. Babies are born, children grow to adulthood, marriages are made and broken, and the aged decline and die as the pile grows and grows. Life goes on, sometimes happy, sometimes sad, always precarious. Some of the pickers do better than others, resulting in a social hierarchy on the mountain, but all nonetheless share an unbreakable sense of community and help each other during the roughest times — floods and fires, illnesses and accidents.

The endemic insecurity of the pickers’ lives makes for a compelling story that looks at a global issue from a fresh perspective. In her introduction, Roy states, “I came to see these mountains as an outpouring of our modern lives — of the endless chase for our desires to fulfill us.” The book, more a philosophical examination than a political manifesto, is presented in the author’s straightforward, unemotional prose, unburdened by moral judgments or policy agendas.

The narrative is interrupted periodically by quotations in Marathi, an Indo-Aryan language and one of the official languages in Western India. It is spoken by about seven percent of the population, according to the CIA’s World Factbook. The quotes, possibly of interest to native speakers, can be intrusive to those of us who (and I’m assuming that’s a majority of us) are not.

There are other castaway mountains with similar denizens in Delhi (its trash mountain is reportedly as tall as the Taj Mahal), Sri Lanka, Ethiopia, China, and many other places around the world. Cannily, a client of Roy’s, when asked how she would grow her trash-picking business enough to repay a loan, responded, “Will there ever be less trash?”

Anatomy of a Genocide: The Life and Death of a Town Called Buczacz