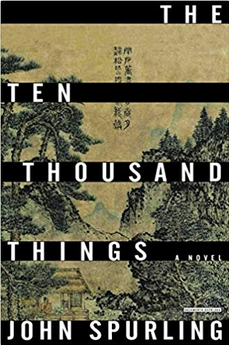 It is written in the Dao De Jing, “Dao gives birth to one, One gives birth to two, Two gives birth to Three, Three gives birth to the ten thousand things.” From chaos comes order (“Let there be light”); from light comes darkness (yin and yang); like the holy trinity, they merge to become the Supreme Ultimate; from which is created the world and everything in (and out of) it.

Through the life of Wang Meng, one of the Four Masters of the Yuan Dynasty who were renowned for their sweeping ink-on-paper landscapes wrought with calligraphic mastery, author John Spurling subtly and elegantly illustrates Daoist precepts in his novel The Ten Thousand Things. Descended from the founding emperor of the now vanquished Song Dynasty as well as revered painters Zhao Mengfu and Guan Daosheng, Wang Meng is a reluctant bureaucrat in the government of the waning Yuan dynasty in the mid-14th century during “the eighty-fourth winter of Mongol occupation.”

They were turbulent times, but are there ever times that are not turbulent? The Mongol conquerors were losing their grip on the empire, and bandit rebellions were popping up throughout the nation. Caught in the middle were the bureaucrats who served their foreign masters while yearning for the days of the Song Dynasty when the emperor was at least Han Chinese. As the story begins, Wang Meng has just resigned his post as a legal secretary and retreated to his country home to do what he most enjoys, live simply, contemplate nature, and paint. He is 36 years old, and just becoming a master of his art.

The novel is framed by a first-person narrative of 78-year-old Wang, imprisoned by the suspicious, tyrannical first emperor of the Ming Dynasty, who has wrested control of the empire from the Mongolian Yuan. To pass the time, Wang sets down his life story, written in the third-person in order “to see the pattern of my own life in the way I see a tree in a landscape and to look at myself as someone else.”

His tale opens with Wang Meng losing a jade ring that was passed down from his ancestor, the Song emperor, and his previously staid life becomes as roiled as the times. A bandit called the White Tigress visits Wang to request his help in getting revenge on the magistrate who killed her husband. While protecting his master’s house, Wang’s loyal servant accidentally burns down the studio and then dies trying to rescue its contents. Deeply bereaved at the loss of his servant and feeling ungrounded by the destruction of his life’s work, he agrees to devise a stratagem for the White Tigress’ revenge. The brutal battle not only brings slaughter to the magistrate, his household, and the town, but kills the White Tigress, as well.

From there, Wang navigates the dangerous territory of a dying empire. The years, and the tragedies, bring him wisdom and acceptance. He sees how everything has its opposite — the two that comes from one — and how the balance of the two shapes the world.

These balanced oppositions abound in his life. Wang’s closest friend is Ni Zan, an artist who is his opposite, producing austere, monochromatic ink paintings which “contained the least and demanded the most of both artist and viewer.” Wang’s grandfather was loyal to the Yuan Dynasty, which meant that he was disloyal to the former dynasty, from whose emperor he was descended. The bandits become patriots as they fight the government, and what was an act of theft becomes an honorable rebellion against the government’s own criminally high taxes. A young novice named Zhu who Wang meets at a monastery becomes the warlord who will conquer the Mongols to become the first emperor of the Ming Dynasty. He will also usher in a new terror as he eliminates imagined enemies and traitors, including Wang, the very man who told him to leave the monastery and go live in the real world. For the simple act of going to see the art collection of the new emperor’s prime minister, who shortly thereafter is executed for conspiracy, Wang is thrown in jail for treason, which is why he is penning his memoirs.

Just when Zhu ascends the throne as the next emperor, Wang’s jade ring is found and returned to him. So begins the cycle again. A peasant has become emperor. Wang is given another, more elevated, bureaucratic posting. The new emperor proves to be just as despotic as the old one.  He strives to return the empire to “a more primitive age [of] much simpler, smaller, wholly agricultural kingdoms of the distant past and the egalitarian, nature-based ideals of the Daoists, but he sought to achieve them in a most un-Daoist way, by active coercion.” Class becomes rigid so a peasant must always stay a peasant, the population is forcibly resettled, an elaborate system of registering households is established (some form of which is still in effect in China today), education is strictly regulated, even the clothes people wear are prescribed. Centuries later, these tactics have been employed by Chinese governments from the Ming Dynasty to today’s Communist Party.

Like the scroll paintings that Wang creates, The Ten Thousand Things is a deceptively simple book. At first you see a long series of events that make up the artist’s life. With contemplation, the details get clearer, the artist’s intent sharper. The story is timeless, as are the mountains that Wang Meng was acclaimed for painting, which endure to this day. The definition of life, Spurling’s Wang asserts, is “that every one of the ten thousand things ha[s] an invisible, indestructible spirit within its visible, vulnerable body.”

Alice Stephens is a regular contributor to the Independent. Her column, Alice in Wordland, appears monthly.