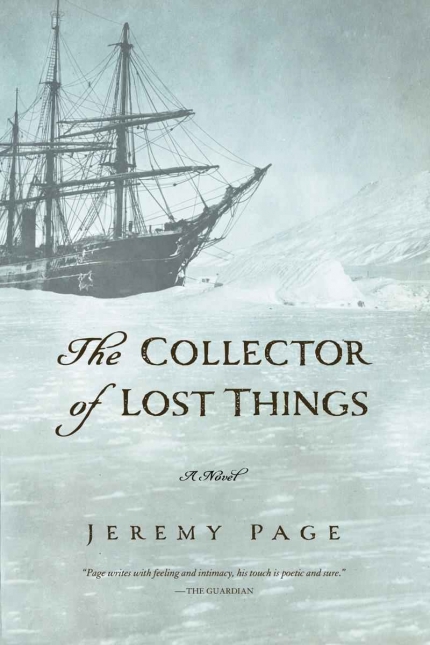 This is a sad tale, a tale of loss. There’s loss of love and life, loss of animal species, even loss of mind as the characters aboard the three-masted Amethyst, on an expedition to the Arctic in 1845, begin to lose their grasp on reality.

The key passenger on board this ship is protagonist Eliot Saxby, a dedicated biologist whose knowledge of birds is both extensive and passionate. Saxby loves all creatures of the natural world and cringes at man’s propensity to slaughter and destroy them.

His employer has paid for the Amethyst’s expedition to the Arctic. Its goal is to find and document any trace of the great auks — large, mostly flightless birds that are feared to be extinct. Saxby’s expectations are modest: Perhaps he can spot remnants of an auk skeleton on an icy Arctic shelf; even the frozen feces or stomach contents of the last great birds (which Saxby is confident he will be able to identity) would constitute a major scientific breakthrough.

The ship’s Captain Sykes will supplement the expedition’s commission with seal skins, walrus tusks, blubber oil and other bounty he and the crew can kill and harvest along the way.

Two other passengers join the Amethyst.  The emotionally rocky Bletchley comes aboard with three expensive gun cases that the crew eyes enviously. Bletchley’s beautiful cousin Clara steps onto the ship cautiously. She is withdrawn, but immediately captivates Saxby and attracts the riveting attention of at least one member of the crew.

Beginning early in the voyage Saxby’s losses are constant. During a horrifying seal-slaughtering sequence, his revulsion comes through sickeningly:

“Some of the seals were still moving with heavy thumps of their tails, trying to escape as their skins were worked loose. I watched one of the sailors holding a fist full of loose hide in his bloodied hand, while the animal he was skinning tried to roll itself away from him in a slick of its crimson blood, its flippers paddling uselessly at the air. This was a vision of hell, I thought.”

Saxby’s distress at the killing extends to the most delicate of birds. In another cruel scene, the ship’s crew makes sport of trapping and crushing a greenfinch, a bird that flies desperately around the ship because it is too far from land to escape.

Human cruelty is a constant theme. Saxby sees man as murderous, little more than “a beast of greed and profit.”

Meanwhile Saxby is falling for the lovely Clara. He is convinced he recognizes her from some years before when she (or, as he remembers her, “Celeste”) was held captive in an upper bedroom of her father’s estate. The episodes threading through this recollection are presented in long (and effective) flashbacks containing elements of drama and suspense that are lacking in Saxby’s chaste pas de deux with Clara on board ship. He is awkward, shy, gentlemanly; his passions for the natural world have no counterpoint in his relationship with Clara. Even in their single sexual episode, Saxby seems virginal, fumbling reluctantly, almost apologetically, Clara coolly directing him. This passivity, which includes Saxby’s failure to do anything to stop the animal killing — or even strenuously object to it — ultimately renders him unsatisfying as a protagonist. Interesting things happen to Saxby: the killing, the beautiful woman, the vagaries of a shipboard voyage to the frozen Arctic ice fields. He’s there, along for the ride, but he has no power to influence events.

In addition, Saxby turns out to be an unreliable narrator. His confusion about “Celeste” and Clara seems natural enough, but on one or two other occasions we are left wondering whether an event really occurred or was only a product of Saxby’s vivid imagination. At the book’s end, the otherwise poignant scenes of Saxby’s voluntary exile on a Hebrides island are undermined. Did those dramatic developments actually occur there? Or did Saxby’s mind create them? Are these perhaps the lost things referred to in the title? We never know.

Still, The Collector of Lost Things is a valuable novel. Page’s grasp of nature, the fact that his cautious protagonist always takes time to observe the fog formations, icebergs, discs of sunlight on the water, the craggy rocks washed with steam and surf, the dolphins, the whales and the marvelous parade of redshanks, kittiwakes, gannets, guillemots, puffins, skuas and petrels make Saxby an interesting and easy companion. The author’s (and Saxby’s) deep appreciation of all things in the natural world, and Saxby’s melancholy observance of them, will make this a satisfying book for those who especially love nature.

Phil Harvey’s stories have appeared in 15 magazines. His latest novel,Show Time, was released in May 2012.