The Sworn Virgin: A Novel

After taking a vow of celibacy in an oppressive society, a young Albanian woman finds love 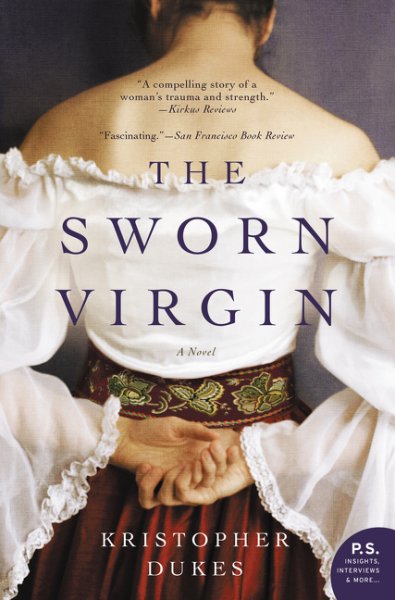 It’s amazing how many fascinating topics can escape our notice. Whether because of geographical distance, cultural barriers, or simply a lack of time or interest, we sometimes miss out on opportunities to learn about something completely new. Kristopher Dukes’ achingly poignant novel, The Sworn Virgin, gives us a taste of such a topic — and leaves us wanting more.

The story opens with a harrowing scene during which we learn that Eleanora, the daughter of a healer from the mountains of Albania, has lost her father, Baba, in an honor killing. The death is made even more painful when the book flashes back two weeks, long enough for us to learn about Eleanora’s deeply loving, mutually respectful bond with her father. He believes she should be treated as men’s equal, despite the misgivings of Eleanora’s stepmother, Meria, and the scorn of the town in which they live.

In part, it’s her father’s willingness to overlook convention and help Eleanora expand her horizons that will be his downfall. When they visit the city from which Eleanora is to depart so she can take art classes in Italy, “Baba still had that wistful smile on his face, as he looked past her. ‘[Your mother] would be so happy you are escaping all this’ — he waved his hand in the air — ‘this smallness.’”

Moments later, he is shot dead in the street.

Eleanora is thus sentenced to the smallness she has been trying to outgrow her entire life. As she stares down at Baba, she realizes that he was her protection from the harsh customs of rural Albanian society, allowing her to flout many rules only by dint of his proximity.

Now, watching her father’s body being lowered into the ground, she grieves not only for him but for her freedom: “She had come…as the daughter of a man in the unique position to send his daughter abroad to study art, and she would leave as an unprotected orphan.”

Not only is Eleanora now a woman vulnerable to rigid traditions, she must also make the harrowing journey back to her village to reunite with her stepmother and contrive to save them both from starvation.

Readers will grieve with her when she is forced to sell her father’s horse to a stranger and loses her own beloved mount in a river accident: “She squeezed her eyes shut, shooting them open again when her mind replayed Tiziano thrashing in the river. She retched, her wet hair slapping her face. She had had Tiziano since she was a child, and he had tried to protect her.”

Scenes similar to this one, devastating in their emotional depth, riddle the book, turning it into a sieve of sadness. When Eleanora returns to her village, she and her stepmother spend many miserable weeks foraging for food before Meria makes a decision that Eleanora experiences as profound betrayal.

In response, the young woman chooses to become a sworn virgin — someone who can act as a man in all situations but one: She must remain a virgin her entire life. Bitterness turns Eleanora against the woman who raised her, but she does not regret her choice.

Upon seeing her legendary good looks diminished by sun and by men’s clothes, she reflects, “What did her beauty matter? She had never cared much about marriage, and it was no longer an option anyway.”

Instead, she treats her new status with both pride and trepidation; she learns how to shoot a gun and run her and Meria’s diminishing household while still maintaining her independent spirit.

This challenge is made more difficult by the arrival of a wounded stranger, Cheremi, at the women’s doorstep. Eleanora nurses him back to health, nervously realizing that her feelings toward him are not those of a doctor toward her patient.

Though his future is not bound to theirs, Cheremi remains at the house, assuming many of the duties once left to Eleanora. Her conflicted feelings are not made less complicated by his behavior; he is by turns lover-like, authoritative, and respectful.

The slow period after Cheremi’s arrival may seem frustrating, but it also feels necessary, as it is clear the makeshift family cannot continue thus forever, with each person’s conflicting desires and secrets chafing against the others’.

Yet for all her status, Eleanora is inexperienced in making major decisions. Even as she plans to flee to Italy, her emotions tie her to Cheremi. When they meet on the trail one day after foraging in the forest and he suggests they return home, “Eleanora was about to protest that she was actually leaving — and he might leave with her, too — but he said it so persuasively it became her truth as his arm encircled her.”

In the end, it is not possible for Eleanora to live by Cheremi’s truth. She needs her own, and as she strikes out with him beside her, she finds that neither her vows nor her plans will be as easy to adhere to as she had hoped.

Cheremi’s demeanor changes the farther they get from home, and Eleanora must grapple with the fact that, in the outside world, she may not be as much his equal as she thought. How she reacts to this reality, and to her changing fortunes, will satisfy readers while reminding them that hope is a fragile thing indeed.