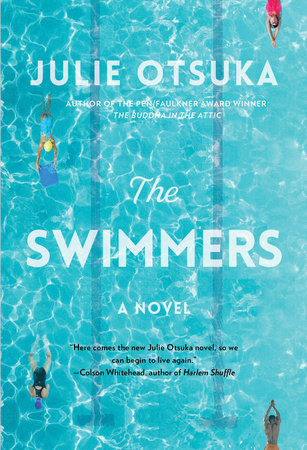 There are books that seem as if they were written just for me, and Julie Otsuka’s The Swimmers is one of them. Like its main character, my name is Alice, and I am a dedicated swimmer; more significantly, Otsuka’s The Buddha in the Attic was my first review for the Independent. So I was half in love with this new novel before reading the first line.

In Otsuka’s signature style, The Swimmers is a grand pointillist narrative driven by the unrelenting accretion of details like dots of color filling up the canvas. Formatted in solid blocks that fill the page, the text is given texture through the generous use of italics, parentheses, em dashes, and disembodied comments. This approach to storytelling is not to everyone’s taste; those used to the more traditional narrative arc will pine for dialogue, scenes, heroes, and villains.

In the beginning, there is the pool, described by a collective we: “The pool is located deep underground, in a large cavernous chamber many feet beneath the streets of our town.” Who are these narrators? “Some of us come here because we are injured, and need to heal…Some of us come here to escape, if only for an hour…Many of us live in the neighborhood and simply love to swim.”

Immersed in a flood of minutiae, the reader plunges into the pool’s peculiar culture and the superstitious habits of its swimmers. There’s the obsession with lap-counting, lane and stroke preferences, those who do flip turns and those who don’t, and the mind-numbing sameness of an activity performed in a medium that monopolizes the senses.

When a crack appears on the bottom of the pool, the community becomes disordered. Some refuse to swim over the crack, some ignore it, some leave for good. “Because the truth is, we don’t know what it is. Or what it means. Or if it has any meaning at all.” There are those who are obsessed with it, and those who are “crack deniers.” But the crack is all too real, and the pool closes.

Though the prose style and structure bear the unmistakable characteristics of Otsuka’s earlier books, The Swimmers charts new territory. It is not an historical novel, and there is a named protagonist, “Alice, a retired lab technician now in the early stages of dementia.” The narrators seamlessly shape-shift from chapter to chapter.

As the story unfolds, the narrating “we” blurs into “you” and then merges into “Alice”: “You wake up one day and you can’t even remember your own name (It’s Alice).” Then the “you” turns into “she,” and the narrator shape-shifts once again into Alice’s nameless adult daughter, who shares many biographical details with the author.

Through a chronicle of the events Alice remembers, including internment during World War II, first love, a compromise marriage, the death of a newborn and subsequent births of the narrator (“It was as if I’d given birth to the same girl twice.”) and her brothers, a rich and complicated life is revealed.

Illustrating the cruelty of senility, also enumerated are the things Alice does not remember, including names, the day’s date, and anything to do with the present. As she slips into the vivid world of the past, her lifelong preoccupations surface in her daily interactions, revealing the bedrock of her character in her concern that her daughter get remarried, her flashes of jealousy, and her perpetual anticipation of a comforting Sunday drive with her husband.

There is a surprising aggressiveness to the chapter narrated by Belavista, the “long-term, for profit memory residence conveniently located on a former parking lot off the freeway just minutes from the Valley Plaza Mall” to which Alice is admitted. The institution is deeply cynical about its mission, sneering at its inmates:

“There is no ‘meaning’ or ‘higher purpose’ to your affliction. It is not a ‘gift’ or a ‘test’ or an opportunity for personal growth or transformation. It will not heal your angry, wounded soul or make you a kinder, more compassionate person who is less judgmental of others. It will not ennoble your paid carers (‘She’s a saint’) or enrich the lives of those around you who have always loved and adored you. It will just make them sad.”

This is Otsuka taking the gloves off in a way she hasn’t since the ending of When the Emperor Was Divine.

Finally, Alice’s daughter grapples with the guilt of failing her mother in ways both big and small, belatedly coming to understand the significance of the older woman’s life. As she watches her mother disappear into dementia, the daughter finds the compassion and understanding for her that was elusive when Alice was in her prime.

After Alice’s death, daughter and husband sift through her possessions. “All of this, of course, is garbage.” The most precious items — three black water pearl necklaces that Alice’s father brought with him from Japan and other items of jewelry — have disappeared. Nevertheless, the daughter realizes that what she cherishes most are the very things that were robbed from her mother: the memories.

Since reviewing The Buddha in the Attic for the Independent, Alice Stephens has reviewed more than 80 additional titles, written dozens of columns, and published a novel, Famous Adopted People.