Now We Can All Go Home: Three Novellas in Homage to Chekhov

These tales imagine what happens after some of the famed Russian writer's plays end. 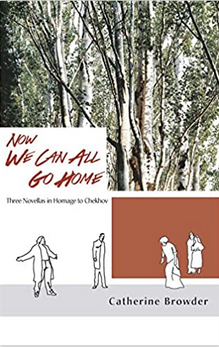 What happens when the play ends? Catherine Browder’s Now We Can All Go Home imagines what life is like after the curtain falls on three of Anton Chekhov’s plays: “The Three Sisters,” “Uncle Vanya,” and “The Seagull.”

Famous for his use of indirect action, Chekhov places the triviality of day-to-day living at center stage, while he hides climactic scenes of blood-ridden action from view. As the narrator of Chekhov’s Gooseberries points out: “we see the people going to market for provisions, eating by day, sleeping by night, talking their silly nonsense, getting married, growing old, serenely escorting their dead to the cemetery; but we do not see and we do not hear those who suffer, and what is terrible in life goes on somewhere behind the scenes.”

Chekhov’s plays are certainly realistic, as they remind the reader and/or viewer that life doesn’t exist in black or white, tragedy or comedy — it is much messier, much grayer. His characters are riddled with contradictions and quirks that heighten their humanness, and just as we finally begin to understand them, it’s the final scene in Act IV.

Like Browder, one can’t help but wonder what exactly happens behind the scenes in “The Seagull,” when a shot off stage signifies a suicide. Or in “The Three Sisters,” when a dramatic duel is hidden off stage once again, only to end in a gunshot heard in the distance.

Or in “Uncle Vanya,” with the attempted murder by shooting on stage. Imbued with speculation and curiosity, Browder delves into the minds of Chekhov’s characters. Where questions arise, she crafts the answers we thought we’d never know.

In “Uncle Vanya,” Yelena briefly gives in to Dr. Astrov’s advances — even after discovering Sonya’s love for him — and then abruptly leaves the estate with her husband, Alexander Serebryakov. In Browder’s first novella, A Visitor from Kharkov, the reader is taken to Yelena and Serebryakov’s apartment in Kharkov. What does Yelena’s husband have to say about his unexpected near-death experience with Vanya? Do they think about those they left at the estate? Will Valentin Levchenko, Yelena’s new piano teacher, prove to be more than a teacher?

As Browder answers these questions, the reader quickly notices that while the story has continued, its narrative voice couldn’t be more different. Chekhov models his characters after real, imperfect people who under-communicate, over-idealize, philosophize, over-emotionalize, betray one another, love for the wrong reasons, yearn for the past, fear the future…

While these characters may share their thoughts and feelings with other characters, or with the audience, Chekhov never gives us a look inside their private inner monologues. Browder doesn’t hold back — she gives the reader an intimate view into their lives.

In “The Three Sisters,” Irina chooses to marry Baron Tuchenbach, who is then killed in a duel by Captain Solyony, one of her former suitors. The play ends with the sisters standing close together, pondering the purpose of life and resolving to “work, and nothing else.” In her second novella, Now We Can All Go Home, Browder picks up right where Chekhov leaves off — Irina surrounded by her sisters, consoling her. The reader finds out the twisted fate of Solyony, among other things.

In the final scene of “The Seagull,” a gunshot is heard as the household prepares for a game of cards. The doctor, Yevgeny Dorn, informs Trigorin of Kostya’s suicide and tells him to take Kostya’s mother away so she doesn’t see his body. In Browder’s final novella, Our Side of the Lake, years have gone by, and the reader is thrown into the intimate world of the doctor, Genya. We learn of Nina’s development as an actress in Moscow and reflect with both of them about Kostya’s life and death.

Browder’s work doesn’t try to emulate Chekhov’s style of writing. Rather, it offers the reader something one rarely finds in the work of the famous author and playwright: closure. Now We Can All Go Home is a well-researched work of fan-fiction, and Browder’s sparkling enthusiasm for Chekhov’s characters is apparent on each page.

For the diehard Chekhov enthusiast, however, the magic is lost when the mystery is revealed. As Chekhov wrote in a letter in1888, “The role of the artist is to ask questions, not answer them.”

From a debut novelist comes this ambitious, profound story spanning continents and generations