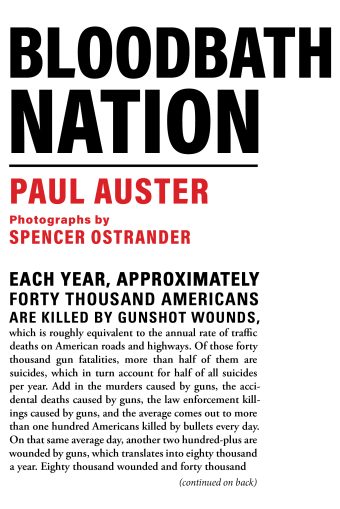 Between 1968 and 2017, more than 1.5 million Americans were killed by guns. That shocking fact is one of many in Bloodbath Nation, Paul Auster’s new book that’s really more of a long essay. Rounding it out are photographs by Spencer Ostrander of locations where mass shootings have occurred.

As Auster makes clear, our national culture is becoming that of the gun owner. Because of the Second Amendment to the U.S. Constitution — “A well regulated Militia, being necessary to the security of a free State, the right of the people to keep and bear Arms shall not be infringed” — we put no limits on how many firearms one person can own. Those of us opposed to gun culture are working to have that amendment abolished.

How bad is it? That 1.5 million figure cited above is more than the number of soldiers killed in every American military conflict since the Revolutionary War. The U.S. population owns 393 million guns — more guns per 100 people (120.5) than any other nation. In fact, we have more guns than people. Each year, some 40,000 of us die from gunshot wounds, self-inflicted or otherwise.

This doesn’t mean that everyone owns a gun, of course; most do not. Rather, countless gun owners possess multiple weapons. But Auster reports that gun ownership grew from 32 percent of the population to nearly 39 percent during the pandemic.

Why doesn’t the government work to prevent gun deaths? Because voters don’t want it to. In 1996, the Centers for Disease Control and Prevention (CDC) was barred by Congress from using federal funds to conduct research that “may be used to advocate or promote gun control.” In 2018, the law was amended. Now, the CDC can indeed conduct research into gun violence. It just can’t use federal funds to acknowledge the need for gun control.

Auster goes to some lengths to condemn two national sins, slavery and the slaughter of Indigenous Americans. He shows how the plethora of guns made both phenomena possible and especially brutal for the minorities affected. He then excoriates the United States for refusing to come to terms with the blood on its hands:

“Germans have faced up to the barbarism and inhumanity of the Nazi regime, but Americans still hoist Confederate battle flags throughout the south and elsewhere and commemorate the Lost Cause with hundreds of statues glorifying the traitorous generals and politicians who ripped the Union apart and turned the United States into two countries.”

Shootings have affected schools more than other institutions. Auster reports that there have been 228 episodes of gun violence in schools and colleges across the country in the past decade.

Like many Americans of a certain age, he grew up playing with toy six-shooters and mimicking the gunslinging cowboys he saw on big-screen westerns. A skilled marksman by age 10, he also lived through the traumatic aftermath of the murder of his grandfather by his grandmother when his father was a child and learned firsthand how families can be wrecked by a single act of gun violence.

Auster is a lauded author of multiple award-winning books translated into more than 40 languages. His writing throughout this work is as clean and professional as readers should expect. Yet the accompanying photos of mass-shooting sites — although they required Ostrander to travel to 50-plus locations — are unexceptional.

I was moved to learn that a portion of the proceeds from this book will be donated to the Violence Policy Center, a nonprofit organization working to stop gun death and injury through research, education, and advocacy. Like other such groups, it has its work cut out for it. As the title of this plain, ordinary book about an extraordinary American plague indicates, the U.S. truly is a Bloodbath Nation.

Tom Glenn, Ph.D., is well acquainted with what guns can do to the human body. He spent the better part of 13 years in Vietnam assisting troops in combat with signals intelligence, and he escaped under fire when Saigon fell in April 1975. Glenn was assigned to a variety of other locations after 1975, but that work is still classified. He retired from the government service as early as he could more than 30 years ago to write fiction. He now has six books and 17 short stories in print.

By Nick Littlefield and David Nexon