The Stowaway: A Young Man’s Extraordinary Adventure to Antarctica

The winning tale of an intrepid teen and his burning desire to see the world’s coldest continent. 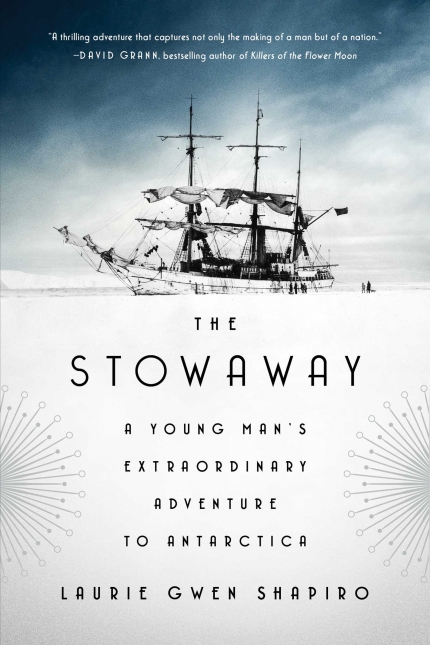 The internet has made many kinds of historical research easier and quicker, but it can’t replace curiosity, diligence, and doggedness — not to mention luck and pluck. Those are human qualities, not e-attributes. And writer Laurie Gwen Shapiro has them all.

If she didn’t, the small but wonderful story of Billy Gawronski would have stayed buried in the archives of the New York Times, as dead as newsprint. Happily, it is now the subject of Shapiro’s The Stowaway: A Young Man’s Extraordinary Adventure to Antarctica.

In the early part of the 20th century, several European explorers drove the world’s collective vision of Antarctica. The Norwegian Roald Amundsen was the first to reach the South Pole, in December 1911. Robert Falcon Scott was, famously and tragically, second by a month; his death on the return march was fodder for every English schoolboy’s dreams of glory.

And, in 1916, Sir Ernest Shackleton, undertook one of the greatest sea voyages in human history to rescue his crew after the main ship was crushed in the Antarctic pack ice.

Much of the literature of Antarctic exploration is as magnificent as the men it chronicles. How can one not be grabbed, for example, by a book title such as The Worst Journey in the World (a classic, by Apsley Cherry-Garrard, one of Scott’s original party)?

Americans were left out of the Antarctic chase until Richard E. Byrd determined to overfly the South Pole; he did so in November 1929 and returned an American hero. Byrd himself authored several books about his many trips to the southernmost continent.

In none of Byrd’s writings, however, do we find mention of Billy Gawronski. That’s because he was a supernumerary — a mere cabin boy and stoker who sailed with the Byrd expedition but was not chosen to overwinter with Byrd in preparation for the next spring’s flight. His story is a footnote of Antarctic lore but, as resurrected by Shapiro, a great bit of Americana.

Billy was the son of Polish immigrants. His father left the old country in 1907 and settled in New York City, soon making a good living as an interior designer. By Billy’s teen years, Byrd was already renowned, having been the first to fly over the North Pole. (Or at least he said he did; there were soon doubts which remain unresolved today.)

At 4 a.m. on an August morning in 1928, Billy jumped into the Hudson River and swam to Byrd’s flagship, the City of New York. He was a stowaway.

It wasn’t easy. Caught and put ashore, he proceeded to hitchhike to Norfolk, Virginia, where he stowed away again, on another Byrd ship. Eventually, Byrd was charmed by Billy’s grit, and his parents, theretofore appalled by their son’s preference for adventure over interior design, finally acquiesced. (Later, they gloried in his exploits.)

On Byrd’s return, Billy became a minor celebrity in New York’s Polish community; he was the “Kosciuszko of the Byrd expedition.” (Kosciuszko, a Pole, was a friend of Thomas Jefferson and a hero of the American Revolution.)

But he quickly found out, as did most of Byrd’s crew, that Antarctic fame did not translate into a career or financial comfort.

Billy joined the Merchant Marine and eventually became one of the youngest ship captains in World War II, serving with distinction. He never returned to the Antarctic. He was married for the second time, at 50, to a Polish lady from Gdansk. She had lost part of an arm in the war and had, she told Shapiro, “spent the days since then in hunger and in grief.”

Billy brought her to the United States, where they lived, first on Long Island — where they had a greenhouse and a roadside stand — and then in retirement in Maine. They were happy.

Shapiro’s writing is serviceable, though not a model of elegance, and she sometimes opts for a “gee-whillikers” tone (“How Billy yearned for a taste of dangers, hardships, thrills on the ice”). But this takes little away from the merits of a book that would make a perfect gift for a spirited, adventure-seeking adolescent.

Billy’s first wife was a Jezebel. They were immediately miserable together, but before the divorce could go through, she was pregnant with a son whom they called Billy Jr. Many years later, the author tracked him down using luck, pluck, and the internet, to a Florida jail: drug charges and 30 years’ time.

Billy Jr.’s life is an immensely sad one, especially given his father’s stature as a person of modest eminence but high respectability. He was eager to see Shapiro — she was his first visitor in years — and to talk about his father. It is a poignant, strangely perfect end to this lovely book.

Mark Gamin is a Cleveland lawyer and writer.

Things I Have Withheld: Essays