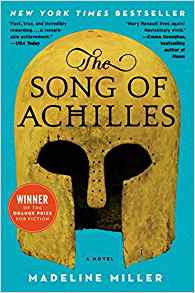 The story of the Trojan War, its heroes and events, has been treated in many works of literature, with few variants in the basic aspects. The gods take sides and doom one figure or shower glory on another, but the result is the same: Paris steals Helen from Menelaus. His brother Agamemnon leads the assault against Troy, sacrificing his daughter Iphigenia to obtain a favorable wind. War is waged for 10 years before the Trojan horse carrying the enemy is brought within the city, by which time many of the great warriors — Hector and Achilles foremost among them — have been killed. Troy falls, Helen is carried back to Sparta by Menelaus, Odysseus goes home to his wife, Agamemnon goes home to his death, and Aeneas escapes to tell his tale.

Miller does not change the accepted events of the story, but she does present an interpretation of Patroclus in The Song of Achilles that differs from the image found in the Iliad. Homer describes Patroclus as warlike, illustrious and godlike. In Miller’s book, he is unloved by his father, and bullied by other boys. Lashing out at a tormentor, Patroclus accidentally kills him, so must be exiled and brought up as a foster child in the kingdom of Achilles’ father, Peleus. There, too, he finds himself an outsider, but is surprisingly befriended by the glorious young prince. Achilles’ mother, the goddess Thetis, disapproves of the friendship, and sees to it that Achilles is sent to be tutored by Chiron, the centaur. Against Thetis’ wishes, Chiron welcomes Patroclus also, and the two boys spend several years with him. During that time, Achilles and Patroclus become lovers as well as friends.

With the Trojan War about to begin, Peleus calls back the boys, thinking that Achilles will lead an army from his kingdom. Thetis carries her son off to Scyros instead, wishing to break up the youths’ relationship and prevent Achilles from fighting. She forces him into a liaison with Deidameia, princess of Scyros, who later gives birth to Achilles’ son, Neoptolemus. Patroclus follows Achilles to Scyros. Although Thetis has made Achilles disguise himself as a girl, Odysseus arrives and, tricking Achilles into revealing himself, they head off to war.

Miller has chosen the relationship between Achilles and Patroclus as the focus of The Song of Achilles. Through their story, the character of Achilles is revealed, good and bad. We come to understand Achilles’ intense concern with the acknowledgement of his honor and recognition of his worth that leads him to withdraw from battle to demonstrate just how valuable he is.

The author creates a sympathetic character in Patroclus, who narrates the novel. In the Iliad, his life is not given much attention — his importance is in his death which brings a grief-stricken, raging Achilles back into battle. In The Song of Achilles, Patroclus is significant not only in relation to Achilles, but as the lens through which we see the other players.

The medicine and surgery that Patroclus learned under Chiron’s tutelage become useful during the war, and he earns respect from the soldiers because of his skill. He knows that he will never become a warrior and leader like Achilles, whose gifts come from the gods, but he recognizes that he can influence Achilles to use that power to protect others. Having asked Achilles to claim Briseis as a prize in order to save her from rape by Agamemnon, Patroclus befriends her. He keeps urging Achilles to claim the young women who are to be distributed as prizes, until Achilles gets a reputation for insatiable lust with his need to have a new large tent to contain all the girls (whom he does not touch). The story of the friendship between Patroclus and Briseis is moving, becoming all the more poignant when Agamemnon seizes her to compensate for the loss of his own prize, Chryseis. The taking of Achilles’ prize, with its insult to his honor and status, is the cause of his furious withdrawal from battle. Patroclus, to protect Briseis, confronts Agamemnon and risks Achilles’ wrath.

Miller keeps close to the traditional interpretation of the major figures of the Trojan War, fleshing out those who are essential to her story. The portrayals of Odysseus and Agamemnon are especially well done, giving a sense of their personalities as well as their roles in the story. She has been freer in presenting some of the characters, such as Patroclus and Briseis, who have not been as fully developed in other works. Thetis, seen through Patroclus’ eyes, becomes a chilling figure — a controlling mother who tries to shape her son’s life and hates Patroclus for being part of it.

Particularly satisfying is the ending of the novel, which, given the confines of a story that has both of its major characters dead before it ends, is quite a remarkable achievement.

The Trojan War has been a popular subject through the ages. From Aeschylus and Euripides through Boccaccio, Chaucer, Shakespeare, Racine and others to Jean Giraudoux and Barry Unsworth in more recent times, aspects of the tale have been told and retold.

The Song of Achilles joins a venerable tradition. Taking an ancient story, it interprets the milieu and culture from which it arose, presenting the material through a modern sensibility. It should be read and enjoyed for itself, but if Madeline Miller’s novel sends the reader back to Homer and his successors, she is to be thanked for that as well.

I’m Supposed to Protect You from All This: A Memoir

This heartfelt recollection would benefit from a few more decades of life experience.