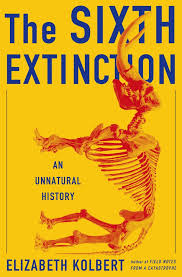 In the forests of Panama, the golden frog has almost completely disappeared. Along with other amphibians, it is being wiped out by a pervasive fungus, and what remains of the population is carefully cared for and monitored at the El Valle Amphibian Conservation Center, a sort of Noah’s Ark for frogs. Suci, a Sumatran rhinoceros at the Cincinnati Zoo, is artificially inseminated in hopes of adding one more of her kind, which number only 100 across the globe (Suci herself died in March of this year). A cave west of Albany, N.Y., where bats usually thrive, is littered with carcasses. And the Great Barrier Reef, home to a rich diversity of life, is half the size it was 30 years ago. Welcome to the Anthropocene.

In The Sixth Extinction: An Unnatural History, Elizabeth Kolbert, author of Field Notes from a Catastrophe: Man, Nature, and Climate Change, goes a step further, exploring the concept of mass extinction and investigating the belief that we are now living in the next era of extinction. The book focuses on the rapid rate of change in the Earth’s ecosystem, the negative effects of this change, and the inability of plants and animals to adapt to those changes.

The Sixth Extinction begins with the discovery of mastodon bones near Cincinnati in 1739 and the emergence of extinction as a concept, credited to French naturalist Jean-Lếopold-Nicolas-Frếderic Cuvier. With each chapter the book methodically chronicles cataclysmic events and the disappearance of plant and animal species. Over a period of four years, Kolbert travels from continent to continent, following dedicated and passionate scientists. She slogs through the mud with the director of the El Valle Amphibian Conservation Center and other volunteers searching for golden frogs; she visits the National Museum of Natural History in Paris, where she holds a mastodon tooth, “the Mona Lisa of paleontology”; she travels to Iceland, the “last known home” of the great auk; she swims in the sea surrounding Castello Aragonese, where there is so much carbon dioxide the water bubbles like champagne; and in Scotland, she collects graptolite fossils with a stratigrapher who believes that rats could one day take over the planet.

While climate change and global warming have been debated for decades, Kolbert here examines our impact on the planet and makes a connection between the Earth’s next cataclysm and humankind. In discussing the possibility that an asteroid was the cause of one extinction event, Kolbert draws on this connection: “Everything (and everyone) alive today is descended from an organism that somehow survived the impact. But it does not follow from this that they (or we) are any better adapted. In times of extreme stress, the whole concept of fitness, at least in a Darwinian sense, loses its meaning: how could a creature be adapted, either well or ill, for conditions it has never before encountered in its entire evolutionary history?” Kolbert also notes that humans have burned enough fossil fuels to add 365 billion metric tons of carbon to the atmosphere and the ocean’s pH – a measure of acidity—is expected to reach 7.8 by 2100. In other words, by altering the composition of the atmosphere, humans are responsible for the next “extreme stress.”

By delving into the lives of plants and animals that no longer exist or that we cannot see and experience, Kolbert engages the reader in a conversation about current environmental threats we all face. Her easy, matter-of-fact narrative navigates a large volume of complex studies and discovery so fluidly that readers whose memory of the Ordovician-Silurian and Cretaceous-Tertiary mass extinctions may be a little rusty will not get lost in a sea of scientific details. The book also contains ample graphs and illustrations, which provide further explanation for the reader. Even though the book can make readers feel as if they are walking through an endless gray cloud, with the end of the world looming on the next page, Kolbert’s clever narrative takes the edge off through hints of humor and reminders of nature’s beauty. Readers smile as Kolbert recounts her dream of frogs smoking cigarettes, and when she gazes into the star-studded sky over the Barrier Reef, readers are reminded of what an extraordinary world this is.

The Sixth Extinction, which is filled with alarming projections, offers no solutions. Instead, it impresses upon the reader the enormity of the problem. The book lays the landscape of the future before us, and in the end, it leaves the question of what kind of world we want to leave behind. Do we want to live in a world where the only existing lions, tigers, and rhinoceros live in zoos, or for that matter, the last grizzlies, wolves, or salmon? Are we willing to take responsibility for our impact on the environment and do something about it? Kolbert punctuates her book provocatively by asking a simple question: “Does it have to end this way?” Only we can answer that.

Christine Baleshta lives in Austin, Texas. She is the author of Looking for 527, and her essays have appeared in naturewriting.com and Yellowstone Experiences.