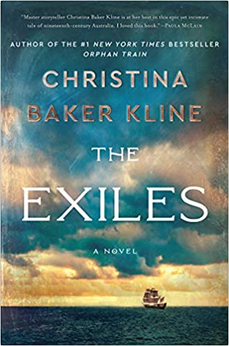 It’s 19th-century Australia, and Mathinna is an Aboriginal Palawa chieftain’s daughter raised by Anglos after British colonialists stole her people’s tribal land. “When most of the Palawa had been killed off, the remaining few were rounded up and brought to Flinders.”

Because Mathinna’s looks are more European than native and she can read and write, the wife of the settlement’s English governor considers her a curiosity. She takes Mathinna to the governor’s mansion as an experiment: She will attempt to mold the girl into a refined British lady. But regardless of how hard she tries to adapt, Mathinna knows she will never belong in their world.

Evangeline is a governess in London, the daughter of a vicar who’d educated her well, except in the realities of the physical world. After her wealthy employer’s son seduces and impregnates her, she is falsely accused of stealing the employer’s valuable family heirloom and is convicted of theft. Her sentence is 14 years’ incarceration at a women’s prison in Australia. As one inmate tells her, “England used to send its dregs to America, but after the rebellion they had to find a new rubbish dump. Australia it was.”

Awaiting her exile, Evangeline arrives at London’s infamous Newgate Prison, a “block-long fortress squatting in the shadow of St. Paul’s Cathedral.” Outside, she sees “children who earned pennies collecting animal bones that were turned to ash and mixed with clay to make the ceramics displayed in ladies’ china cupboards.”

Inside, Evangeline will never get used to “the screams that spread like a contagion from one cell to the next. The vicious fistfights that broke out abruptly and ended with an inmate spitting blood or teeth. The lukewarm midday broth that floated with bony pig knuckles, snouts, bits of hooves, and hair. Moldy bread laced with maggots.”

After surviving three months in the bowels of the jail, Evangeline embarks on a four-month journey on the Medea, a former slaving ship now used to transport prisoners. She knows she will give birth onboard.

Living on the ship’s fetid lowest deck with 200 other women and children, Evangeline meets 16-year-old Hazel, a street-smart convict. But Hazel is also skilled at healing and midwifery — skills learned from her mother before alcohol ruined her — and helps the ship’s surgeon care for the passengers and crew. Soon, Hazel and Evangeline form a friendship, Hazel helping Evangeline overcome her morning sickness, and Evangeline teaching Hazel how to read by “knitting words” on a piece of slate.

When a deckhand viciously attacks a prisoner, the journey takes a disastrous turn, but the ship finally arrives at its destination: Van Diemen’s Land (later renamed Tasmania), “that fledgling colony on the other side of the world that had taken root in stolen soil, choking out the life that already existed and flourishing under the free labor of convicts.” There, the women are committed to their new home, a prison called the Cascades Female Factory.

With a good-conduct recommendation, inmates are eligible to become “assignable” — having the privilege to work as outsourced labor in settlers’ homes. Hired as a maid for the governor’s mansion, Hazel offers kindness to Mathinna when no one else will. But soon, their lives will change again.

The Exiles poignantly explores the issues of social identity, fate, loyalty, and survival during a time in history when women were “less than,” and Anglo society believed itself entitled to decimate indigenous tribes living on confiscated land. From the squalid straw floors and suffering of Newgate, to a ship’s dark and foul hold, to a penal colony in Hobart Town, readers follow these brave women on their journey of survival through inexplicable sorrow, hardship, and loss.

Although the novel chronicles fictional journeys a century past, the author’s commentary on social justice applies today. A masterpiece of historical reckoning, this heartrending story will stay with readers long after they turn the last page.

The Book of Goose: A Novel

A young woman reflects on a complicated long-ago friendship.