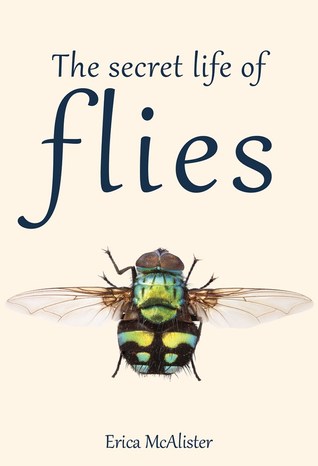 Without flies, we’d be knee-deep in shit (literally) — and have no chocolate!

Those are just two reasons why Erica McAlister, author of The Secret Life of Flies, gets excited about the much-reviled creatures found in one usually annoying form or another nearly everywhere on earth. Those reasons might well be sufficient all by themselves, but McAlister — an entomologist (a.k.a. a “dipterist” or “curator of flies”) at the Natural History Museum in London — offers plenty more, and her sense of humor is a bonus.

Just as people are often categorized by their occupations, McAlister’s chapters divide her subjects by what they do. Some flies are pollinators — responsible not just for servicing cocoa pods, but also mangos, chili peppers, carrots, and onions. Some are “detritivores” and “coprophages” that recycle dead creatures and feces, respectively, back into soil nutrients. It’s a dirty job, but somebody’s got to do it.

Other flies are vegetarians, fungivores, predators, or parasites. And some are sanguivores (bloodsuckers): Mosquitos are flies. All ostensibly serve a purpose of one sort or another, although maybe not to us humans. Mosquitos, for instance, are dinner for birds, fish, frogs, and other animals.

People, of course, think flies should do more for us. For decades, flies have been helpful to medical examiners trying to establish a reliable time of death, and these days, researchers are looking at how maggots might play a role in the development of new antibiotics. Certain fungi-favoring flies can help detect anything from undiagnosed moisture issues in a house to truffles growing underground (no dog or pig required).

Flies were the first creatures sent into space, and they’re still being studied in a lab aboard the International Space Station. Why? McAlister says it’s because they share 75 percent of our genes, suffer (and spread) similar diseases, and exhibit some similar behaviors. (Offended readers shouldn’t take these insights personally.)

Consider her work with vinegar flies:

“We have used their love of a wee tipple to learn more about human behavior and gene expression. When the adult flies commence drinking they become clumsy and start lolling around, falling onto their backs. What’s more, as they drink more they become more amorous and far less able to pick a suitable mate.”

While The Secret Life of Flies isn’t intended as a field guide to help amateur dipterists tell the more than 160,000 species apart, it includes dozens of dramatic and colorful what-the-heck-is-THAT? illustrations and photographs accompanied by captions that are often amusing. (“The Malaya species of fly with its uniquely fluffy and bent proboscis, which helps when you’re feeding off ant vomit.”)

Among the visuals are pictures of wingless flies, flies that are more than three inches across and resemble evil spaceships, flies with antlers, flies with tongues eight times as long as their bodies, and flies whose remarkable disguises make them appear to be ants or spiders.

Despite our best efforts with rolled-up newspapers and insecticides and even the introduction of sterile males, flies are survivors, and McAlister says climate change is likely to increase their numbers significantly.

It also helps, of course, that common houseflies lay up to 500 eggs in a lifetime, and some species lay many more. There are flies in the Arctic and at the Mount Everest base camp (elevation 17,598 feet). Horseflies have been shown to fly as far as 25 miles for a meal, and a male horsefly has been clocked doing more than 90 mph while chasing a female. (“That was one determined male,” McAlister acknowledges.)

They can be exceptionally cruel: One species kills hummingbirds by stabbing them in the eyes. Some are even venomous, including mosquitos: There’s a bit of poison in those bites.

Dipterists are also sturdy souls. Very early on, signaling that her book isn’t for the squeamish, McAlister describes examining a maggot not long removed from a dog’s rear end. Later, she admits that her job is among the few where searching the Internet for the defecation rates of animals isn’t goofing off. (An elephant, for example, is responsible for nearly 40 tons of doo-doo a year — making a lot of flies very happy.)

She and her colleagues go on summer collecting trips organized by the U.K. Fly Society (“dedicated to everything fly”), and not surprisingly, they sometimes feel misunderstood. That might be because they recognize things the rest of us don’t.

Their knowledge, in fact, got in the way of enjoying the movie “Jurassic Park.” When scientists onscreen attempted to remove “dino DNA” from blood in what they refer to as a female mosquito, dipterists in the audience tut-tutted at what they knew was a different species altogether — an improbable impostor.

Like most people who feel they’re doing important work that’s being overlooked, fly scientists get frustrated. “As much as dipterists have written, discussed, debated and (if there is wine involved) shouted about them, flies are completely ignored in most biodiversity studies,” McAlister observes.

She doesn’t have any illusions that we’ll return to the ways of ancient Egyptians, who worshipped flies much as they did cats. But her “hope is that this book makes you look at flies in a different way and think twice about swatting them.” It will do that, and more.

Randy Cepuch, author of A Weekend with Warren Buffett and Other Shareholder Meeting Adventures (Basic Books 2007), helps select titles for coverage by the Washington Independent Review of Books.