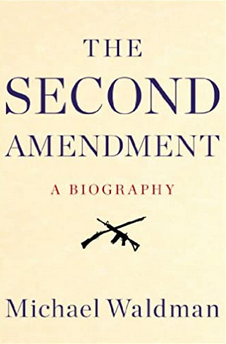 Not very long ago, a book about the Second Amendment would have been what some people call a “thinnie,” destined for a narrow space on the shelf next to Bolivian Naval Heroes and (even less charitably) Eisenhower Speaks His Mind. That changed in 2008, when the Supreme Court in District of Columbia v. Heller found for the first time that the amendment provided individuals with a Constitutionally-protected right to own a gun. A full-size book about the Second Amendment, its origins, its apotheosis, and its future, was then much needed, and Michael Waldman has written it.

Waldman, a former director of speechwriting for President Bill Clinton, is president of the Brennan Center, the liberal law and policy institute at New York University Law School. While he calls his book a “biography,” and it follows a chronological approach, it ends not with a death, but with the Second Amendment stronger than it has ever been, at the advanced age of 223.

Waldman dispassionately describes the origins of the amendment, and reveals the source of its apparently pleonastic commas[1], which have confused grammarians and Constitutional scholars for two centuries. He explains how anti-Federalist fears that a strong central government would supplant state militias with a standing national army led to the amendment’s adoption. Nothing in the Constitutional Convention, the Congressional debates, or, with only minor exceptions, the states’ ratification conventions, supported an individual right to own a gun for self-protection.

Before Heller, no fewer than four Supreme Court decisions denied the existence of an individual right to own a gun, a concept that Chief Justice Warren Burger, no bleeding-heart liberal, denounced as a “fraud.” But through a determined combination of what Waldman characterizes as vigorous lobbying, pseudo-history (debunked, amusingly enough, by a historian named Bogus), “scraped-up social science,” political activity, and judicial sophistry, a determined minority changed the Second Amendment’s DNA into something very different from what it was born with. Along the way, Waldman provides illuminating mini-histories of the National Rifle Association, which morphed from a gun safety and sporting organization to a powerful conservative lobby; the rise of “originalism” as a theory of Constitutional law; and the result-oriented judicial activism of Justice Antonin Scalia.

The natural fulcrum of the book is the Heller opinion, a high point of conservative judicial activism. Waldman meticulously deconstructs its premises and its logic, concluding that Scalia’s originalism is ill-conceived and wrongly applied, disproving his literalism, attacking his disregard of precedent, and demolishing his sophistry and dishonesty. He shows convincingly that the opinion has no roots in the original intent or language of the amendment’s drafters. Indeed, he concludes, it is Justice John Paul Stevens, in his dissent, who takes up the majority’s method and makes a better originalist argument than Scalia himself.

Because of his narrow focus on the Second Amendment alone, Waldman disregards parallel streams of Constitutional law, which contain many of the elements he so harshly criticizes in Heller. Much of his analysis could be applied in comparable degrees to First and Fourteenth Amendment law, which he and the Brennan Center find laudable in other contexts. Like the Second Amendment, the First lay dormant for over a hundred years, emerging only in the stirring opinions of Justices Holmes and Brandeis in the aftermath of World War I.

Even more closely analogous is the development of the Fourteenth Amendment as a guarantor of civil rights. The due process clause of that amendment was largely confined to corporate rights (denominated “substantive” rather than “procedural” due process) for a century after its adoption. It remained so restricted until revolutionized by a combination of the very factors Waldman decries in Heller: original intent (Congressional debates, only this time after the Civil War instead of the Revolutionary War), lobbying (with the NAACP Legal Defense Fund playing the role of the NRA), social science (Gunnar Myrdal’s An American Dilemma), and disregard of precedent (Plessy v. Ferguson). What Waldman castigates as anti-majoritarian in Second Amendment law led to very different results in First and Fourteenth Amendment law, at the opposite end of the political spectrum.

Waldman concludes with a helpful review of what has occurred in the six years since Heller, offering hope to those disappointed in its outcome by claiming that virtually all subsequent challenges to specific gun-control laws have failed. His conclusion is not entirely accurate in either the judicial or the political arena: the Seventh Circuit Court of Appeals overturned an Illinois law that prohibited carrying a loaded weapon outside the home, Congress allowed the assault weapons ban to expire, and the Obama administration failed to obtain stronger gun control laws in the wake of Newtown.

This well-written and easily understood work will appeal to lawyer and layperson alike, and will serve as the definitive work on the subject until new developments come along. When they do, as Waldman concludes in a conversation about his book, “We can’t make our decisions on public safety laws today based on some misremembered history of what happened when people wore powdered wigs and used bleeding for medical care.” That is the abiding message of a living Constitution.

Ronald
W. Meister is a lawyer in New York City. Many years ago in summer camp, he was
certified as a Marksman-First Class by the National Rifle Association

[1] The Second Amendment is only a single sentence, providing, “A well regulated militia, being necessary to the security of a free state, the right of the people to keep and bear arms, shall not be infringed.”