A sweeping look at a pivotal 19th-century figure. 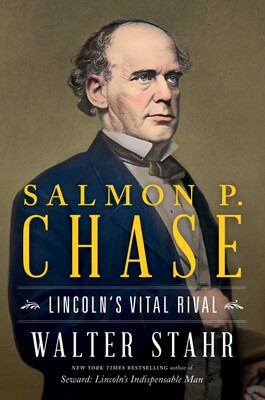 At the beginning of the readable, extensively researched Salmon P. Chase: Lincoln’s Vital Rival, author Walter Stahr writes, “The purpose of this book is to tell the story of Salmon Chase: Ohio Senator, Governor, Civil War Treasurer and Chief Justice ‘from birth to death.’” By employing a diary format and making excellent use of his subject’s vast personal papers — reflected in the book’s more than 130 pages of notes — Stahr has achieved his purpose and crafted a valuable historical resource.

From Chase’s birth in New Hampshire, in 1808, until his death in New York City, in 1873, he was directly involved in several of the most challenging problems of our young nation. After graduating from Dartmouth, Chase went to work in the District of Columbia, where he made important contacts, and then moved to Cincinnati to study and practice law. He would return to DC in 1849 as a U.S. senator from Ohio.

Throughout his life, Chase was a consummate letter writer and public speaker. He loved the spotlight and never shied away from controversial issues. One of those issues was slavery. Although he became a leader in the anti-slavery movement, he was not originally an abolitionist. Still, he wanted full constitutional rights for freed slaves, hoped all enslaved people would be freed over time, and often represented escaped slaves in court. In fact, he became known as the attorney general for fugitive slaves.

Stahr beautifully captures the politics and culture leading up to the Civil War and ably contrasts Chase’s views with those of Abraham Lincoln, who undervalued the intellect and ability of Black people. Whereas Chase’s long-held desire was to free enslaved people and integrate them, Lincoln’s solution (at least initially) was to support the American Colonization Society, which sought to return them to Africa.

Energetic if not frenetic, Chase was extremely ambitious and seemed to seek the presidency until his dying day. He was involved with almost all the political parties of his time — including the Whig, Democratic, Liberty, Union, Anti-Mason, and Free-Soil parties — and was a longtime king maker. His extensive political ties included relationships (allied or adversarial) with Charles Sumner, Henry Clay, Stephen Douglas, George McClellan, Frederick Douglass, Thaddeus Stevens, and, of course, Lincoln. Wonderful illustrations of these and other men enrich the book.

Originally a Whig, Chase eventually joined the Republican Party, which he helped found. With one eye always on the Oval Office, he challenged Lincoln in the 1860 Republican primary, but supported him once Lincoln won the nomination. Shortly after being inaugurated, President Lincoln asked Chase to serve as secretary of the U.S. Treasury. Although Chase had represented banks and served on financial boards, he didn’t feel qualified and was not enthusiastic. Nonetheless, he accepted.

The outbreak of the Civil War created an urgent need for large amounts of money, but America, Chase soon discovered, was in the red. There was no such thing at the time as federal tax; national revenue came mostly from tariffs, which were rapidly declining as the Southern states seceded. Compounding the problem was the absence of a single national currency or bank.

Through creativity, negotiations, begging, and magic, Chase somehow raised the necessary billions to finance the war. At the time, commerce was conducted by barter and with the different notes, promises, and currencies of thousands of local and state banks. During his tenure, Chase created a single currency, the greenback, that would be used across the country (albeit reluctantly at first).

Even while Treasury secretary, Chase openly — and publicly — criticized the execution of the war and mistakes made by fellow Cabinet officers and the president to an astonishing extent. To get his way, he often threatened to resign. Finally, a fed-up Lincoln accepted that resignation. But just as Chase became a newly minted private citizen, Chief Justice Roger B. Taney, of Dred Scott infamy, died. Chase let it be known he wanted the Supreme Court appointment, but by then his relations with Lincoln were frayed. Nevertheless, the president named Chase to Taney’s seat.

After Lincoln’s assassination, new president Andrew Johnson quickly revealed his racist, anti-Reconstruction stripes. When he attempted to fire Secretary of War Edwin Stanton without congressional notice or approval, he was impeached. Chief Justice Chase presided over Johnson’s trial in the Senate, during which the commander-in-chief was acquitted by one vote. Ironically, it was cast by Senator William Fessenden of Maine, who’d worked with Chase at Treasury and who took over his role there after Chase’ resignation.

Johnson’s impeachment notwithstanding, Chase’s time on the high court was somewhat pedestrian, but his ongoing involvement in politics was surprising. While chief justice, he continued as chief officious meddler, too, writing letters, making speeches, attending party conventions, and flirting with the possibility of again running for president himself. Death overtook his ambition in 1873.

In recounting Chase’s long, illustrious life, the author is not neutral. He admires Chase and bolsters his sentiments with abundant, persuasive documentation. While the sheer length of the book and its chronological style can be tedious at points, Stahr has nonetheless provided the reader with a gift. Helpfully, his brief introduction and conclusion serve to orient readers and whet their appetites to settle in and undertake the entire impressive work.

Paul D. Pearlstein is a retired lawyer and a writer, musician, and a docent at the National Museum of American History.