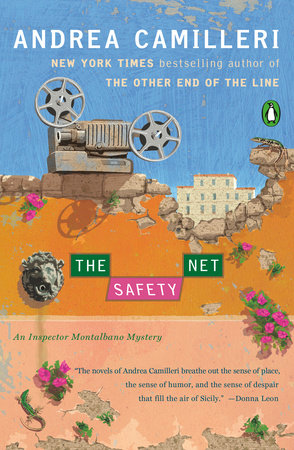 Although The Safety Net is book number 25 in Andrea Camilleri’s award-winning Inspector Montalbano mystery series, the storytelling is as fresh and compelling as it was in book one, The Shape of Water. The often-grumpy, philosophy-spouting Montalbano, always in search of a good meal, is still balancing his long-distance romance with Livia (who lives in Genoa) with solving crimes alongside his cast of cronies from the Vigata police station.

The story opens with a clang — Montalbano’s alarm clock rousts him from dreamland, thrusting him into a world where the town of Vigata has been transformed into a 1950s version of itself by a Swedish film crew. As Montalbano mulls the annoyances of these machinations, a local, Ernesto Sabatello, pops into the station seeking help with a family mystery.

Sifting through his dead father’s belongings, Sabatello has found films shot by his father during the years 1958 to 1963, always on the same day of each year. The scene in each is a simple view of the outside wall of a country house.

While Montalbano is pondering the possibilities to help Sabatello understand why his father was so obsessed with this wall, a school shooting occurs in Vigata. Such a crime literally threatens the town’s young, including Montalbano’s own teenage godson. Who is behind it?

The ensemble cast for these dual mysteries includes Mimi, a member of the inspector’s staff (and father to his godson) who is a rogue with women; Fazio, loyal and smart; and the ever-literal Catarella, whose bungling offers comic relief.

Catarella does add value to the team with his incredible knowledge of computers, although in this story, he is surpassed by Laura Infantino, a young officer from a neighboring station. Her youth and social-media savvy come in handy when Montalbano must immerse himself in the world of Vigata’s teens to unravel the school shooting.

Similar to many detectives, Montalbano does not want credit for solving the spectacular crime, leaving that to Infantino. At the end of this book, the inspector muses about the common motive in both mysteries, thinking that, in solving them, “It would be as if he himself had never been involved in them.”

Montalbano fears credit might lead to a promotion that would catapult him out of Vigata, where he is perfectly happy, living in a house by the sea and indulging his love of traditional cuisine. This is thanks to a network of restaurants that welcome him as a regular, and to the ministrations of his housekeeper, Adelina.

In fact, each book in this series is a love letter to Vigata (a fictionalized version of Porto Empedocle, the author’s real-life hometown) and Sicily in general. While solving each mystery, we often sit in a piazza, marvel at the scenery, and laugh and cry along with Montalbano and the other characters as Camilleri spins the story.

Montalbano’s ability to solve these crimes is, in each book, powered by a number of delightful Sicilian specialties — from an omelet dish not tasted since Montalbano’s childhood to the ever-popular involtini (roll-ups, in this case, with swordfish) and a modern (laughable) dish, fhingafood, American style.

One of the things that endears Montalbano to me is his philosophy of life, valuing justice and humanity even above the law he is sworn to enforce. This book, written in the author’s old age, has the detective thinking more often about his own age, his own view of truth. The movement of the book and its exploration of relationships past, present, and future enhance the sense of passing time. This valuing of time in all its incarnations made The Safety Net one of my favorites in the series.

At its close, Montalbano reveals that, as a youth, he believed truth to be a revolutionary act. He notes that now he believes truth is sometimes best kept under wraps. Camilleri combines these deep thoughts with a fast-moving, intricate plot and comedic ensemble, grounding it all with a strong sense of place and culture. It is this that has kept me waiting for each new installment.

Camilleri began to pen this award-winning series in the 1990s after retiring from a star-studded career as a novelist and in television. The Montalbano books quickly became a sensation, were translated into 30 languages, and were the basis for a still-popular Italian television show. When Camilleri died in 2019 at 93, The Safety Net was already in the publication pipeline.

Stephen Sartarelli has translated the entire series into English. His skill allows non-Italian speakers to enjoy the back and forth between standard Italian (translated into standard English) and the Sicilian dialect (translated as a Brooklynese patois). Sartarelli also adds an appendix to each volume that briefly explains special foods and “inside information” from contemporary Italian culture.

According to Sartarelli, Camilleri has written a “final” to the series. It is in a vault and was set to be released after the author’s death. I look forward to seeing what truths and what triumphs of justice within or outside the strict lines of the legal system Camilleri has in mind for Montalbano in whatever books remain in that vault.

Joan Leotta is a writer of short mysteries, a food writer, a poet, and a story performer. Her new blog, joanleottarecipes.com, is devoted to researching foods from the Montalbano books and presenting recipes that can be recreated in American home kitchens.