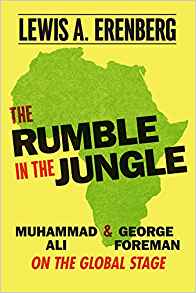 Google “Rumble in the Jungle,” and the first thing that pops up is a kindergartner favorite, a colorful rhyming book about elephants, giraffes, and chimpanzees.

Lewis A. Erenberg’s The Rumble in the Jungle: Muhammad Ali & George Foreman on the Global Stage, an historian’s take on the 1974 heavyweight fight improbably staged in Kinshasa, Zaire (the onetime Belgian Congo), isn’t likely to change that.

The sweet science, as A.J. Liebling counterintuitively called boxing, has attracted a long line of literary heavyweights, from Jack London to Norman Mailer, and an army of would-be contenders in between.

But Erenberg, a professor emeritus of history at Loyola University in Chicago, isn’t striving to go toe-to-toe with Hemingway or W.C. Heinz. Nor is he hoping to entertain those hardcore fight fans eager for blow-by-blow analysis or the vicarious sensation of blood, sweat, and spittle filling the air, the sniff of fear or desperation palpable from a ringside seat.

By any reasonable measure, Erenberg’s The Rumble in the Jungle isn’t a boxing story at all. His account of the fight itself — best remembered for Ali’s spontaneous rope-a-dope stratagem of leaning against the ring ropes, pawing meekly while the younger, stronger, seemingly invincible champion punched himself into exhaustion, and then ending the fight with a four-punch knockout in the dying seconds of the eighth round — takes up all of eight pages.

Erenberg devotes three times as much space to Zaire 74, the three-day music festival that preceded the fight, veering off into lengthy discourse on the politics and economics of the music industry.

Even as social commentary, The Rumble in the Jungle lacks some of the immediacy and intimacy of earlier treatments from writers who were there. And what it misses in first-person testimony — Erenberg hasn’t interviewed any of the principals or their camps — isn’t easily made up, even with impeccable research.

But the professor’s central focus, all these years later, is on framing the fight — conceived by Don King, the bombastic promoter with the finger-in-the-electrical-socket hair; financed by Zaire president Joseph Mobutu’s larcenous government; and scheduled to start at 4 a.m. local time to accommodate prime-time viewing in the U.S. — as a pivot point in the racial, political, and cultural upheaval of the 1960s and 70s.

Ali, the black Muslim stripped of his title and license to fight after refusing to enter military service at the height of the Vietnam War, is seen as the embodiment of the anti-war movement and the struggle for black empowerment, a theme he’s happy to expand upon once on the ground in post-colonial Africa. “I’m the freedom fighter,” he declares, representing “all the African people who are fighting for their freedom and independence.”

That leaves Foreman, the onetime juvenile delinquent who endears himself to a large segment of America by carrying a tiny American flag into the ring at the 1968 Olympics in Mexico City — like Joe Frazier before him — in the uncomfortable role of “house negro” to Ali’s rebel, representing the white establishment’s model of the humble and obedient athlete.

This is metaphorical ground that, like the copper-rich plateaus that once made the Congo the most profitable European colony in all of Africa, has been worked and re-worked before, including by Erenberg in his earlier The Greatest Fight of Our Generation: Louis vs. Schmeling.

And, like those cultural lightning rods from a previous era, Ali and Foreman — bruised and buffeted by many of the same forces that made their fight such a transcendent event — become friends of a sort (or, at the very least, no longer public enemies, later in life).

Ali, brought low by Parkinson’s disease, which robs the sport’s most beautiful athlete of his physical gifts, even the gift of gab, sees the public’s perception of him take a 180-degree turn, due in large measure to the growing unpopularity of the Vietnam War. Once a pariah in large swaths of the country, by the time the world watches his halting effort to light the Olympic flame at the 1996 games in Atlanta, he’s been transformed into a sympathetic figure, hailed as a hero of the civil-rights and anti-war movements who gave up the best years of his career to stand by his beliefs.

Likewise, Foreman, having found God and the American dream, manages to reclaim his heavyweight title at age 45, and thrives as a genial pitchman for Jesus and his eponymous countertop grills. Three decades on from Zaire, with the fight a blip in his rearview mirror, the new Foreman seems almost grateful to bask in the reflected glory of his onetime tormentor.

“We’re so tied in together,” he tells a BBC interviewer, “you can’t say rope-a-dope, you can’t say ‘the Greatest,’ you can’t say Muhammad Ali without saying George Foreman. If I had known it was going to be such a big event, I would’ve enjoyed myself a lot more, even in defeat.”

Jay Price, a longtime columnist for the Staten Island Advance, is the author of Thanksgiving 1959: When One Corner of New York City Was Still Part of Small-Town America, and High School Football Was the Last Thing Guys Did for Love. He coaches high school football in Manasquan, NJ.