The Relic Master: A Novel

A sardonic skewering of the Holy Roman Empire with satire as arch as a Gothic cathedral. 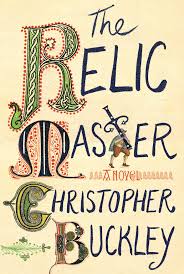 By 1517, Former Swiss mercenary Dismas has had it with the life of a relic master. His two main clients, Frederick III, Elector of Saxony and Albrecht Brandenburg, Archbishop of Mainz, keep him on the road acquiring ancient religious artifacts. The fingers, toes and other sundry fragments of saints Dismas collects are destined for religious displays to lure pilgrims willing to pay for indulgences, those precious get-out-of-purgatory-sooner cards fattening Catholic church coffers across the Holy Roman Empire.

Despite steady and lucrative business, Dismas has grown weary of dealing with shady peddlers hocking spurious wares for clients hungry to acquire bigger and splashier pieces, regardless of shaky provenance:

“More and more, these days, there was an emphasis on size. Last year, the English dealer Arnulfus of Tewksbury had brought to Basel three whole mummified camels. These, he averred, were the very ones that had carried the magi to Bethlehem, bringing gifts of gold, frankincense, and myrrh. Dismas friskily asked Arnulfus why he had not also brought with him the star in the east? Really, it was all getting a bit out of hand.”

With his characteristic wit, Buckley draws parallels between this ancient market in Basel (hint, hint) and today’s frenzied speculation in the art trade:

And one can’t forget the wine and cheese receptions after new artifact unveilings.

But change is brewing. Bishops are fretting over Martin Luther’s pronouncements and the pursuant threat to the indulgence trade. Dismas is ready to cash out his savings and retire to the mountains of Switzerland when, with a whiff of Bernie Madoff, he finds out that he and a host of other prominent people have lost all of their money to a crooked investor. Now penniless, Dismas puts aside his professional ethics to scheme with his friend, the artist Albrecht Dürer, to forge and sell the burial cloth of Christ — there are already several of them floating around the relics market, but they will create the best.

Of course their scheme doesn’t go off as planned, and as a result Dismas winds up bound to provide one final service to Archbishop Brandenburg to spare his soul: translate (i.e., relocate; i.e., steal) the “real” burial shroud of Christ from its heavily fortified palace in Chambéry and bring it to Mainz. And this, about a hundred pages in, is where the novel takes off on the “rollicking historical tale” promised on the flap.

Up until this point, Buckley has taken great pains to set up Dismas’ web of obligations and immerse us in the time and place of the story. He does so at the risk of losing readers who aren’t naturally fascinated with the details of governance in the Holy Roman Empire, the power plays of the Catholic Church, and the coming of the Protestant Reformation. If you are not one of those readers, just hang on: the rest of the book is worth it.

In this novel, as always, Buckley has a talent for comic timing and the ability to make even morally ambiguous characters endearing. Dismas is properly contrite and embattled on the journey he has to undertake with the narcissistic Dürer and the three surly mercenaries assigned to watch over them.

Along the way they meet Magda, a clever and talented young apothecary on the run from a lascivious lord. As is often the case in Buckley’s work, a strong woman is just the thing to whip the men into shape — and of course to become Dismas’ love interest. Yes, you see it coming, but Buckley handles it with enough lightness and humor that you still find yourself rooting for the couple.

Fans of Buckley may be perplexed at his turn into a historical left field with this novel, but they will not be disappointed in the end. The Relic Master delivers all the arch humor, intricate twists, and delightful surprises Buckley’s readers have come to love.

An Elderly Lady Is Up to No Good