The Strange Inheritance of Leah Fern: A Novel

An unusual young woman embarks on a journey of self-discovery. 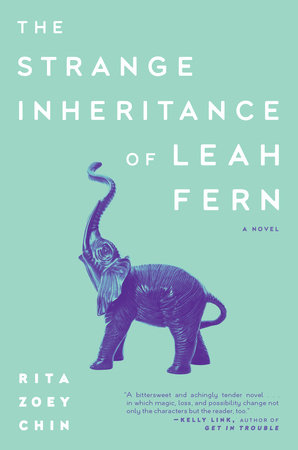 Rarely does a novel come along that charms the reader from its very first page. Even rarer is the story that maintains its allure throughout and transports you to places you’ve never been. The Strange Inheritance of Leah Fern is one of those rarities, a book as magical as the characters it depicts. From a carnival in Alabama to a coven of witches (think Glinda) that travels from place to place, and even to points in an expansive Wiccan spiral, Rita Zoey Chin’s debut novel takes readers on an enchanting emotional journey that will leave you captivated to the very end.

The Strange Inheritance of Leah Fern tells the story of a young woman whose life begins in a carnival. The daughter of a magician mother, Leah herself is an empath — one who can feel the emotions of others simply through touch. At age 6, she becomes a fortune-teller, homing in on her clients’ deeply buried feelings and offering insight into them. Like all carnivals, this one is filled with curious individuals, including the bearded Her-Sweet and the elastic Rubberband Man.

It’s all standard fare for Leah until things take a turn. Suddenly, she finds herself transported to a world as humdrum as the carnival is extraordinary when her mother runs off, leaving the girl in the hands of the decidedly ordinary Edmund Murphy. He raises Leah as his own (although why he does so is one of the novel’s unanswered questions). Each day, they both long for Leah’s mother to return.

It is this longing and the unrelenting feeling of abandonment that cause Leah to sever herself from the world of reality, leading her into a cocoon of detachment where she observes phenomena — notably, flocks of birds — that others can’t see. Ironically, despite her abilities as an empath, she remains out of touch with her own repressed feelings.

Until her 21st birthday, that is. It’s then that Leah decides to take her own life and, in a witchcraft-like ritual, begins a process that ends abruptly with a knock at the door. Before her stands Essie East, a deceased neighbor, who presents Leah with a box. Inside is an obelisk inlaid with gemstones and filled with Essie’s ashes, a check for $9,999.99, and a letter written by Essie with instructions on what to do with the obelisk. The letter ends: “As for you, you’re already dead.”

Thus begins a trek that leads Leah to Michigan, Wisconsin, South Carolina, Quebec, and various other places. Each is a site Essie once visited with her own coven; each is a spot where Leah is to scatter some of the late woman’s ashes. Together, the sites form a Wiccan spiral via which the secrets of Essie’s life are revealed.

The Strange Inheritance of Leah Fern is a journey through time and space, through altering landscapes, and through slices of the past and present. Along the way, Leah begins a process of self-discovery and healing that leads her to some illuminating conclusions:

“One spends her life wanting to believe in magic, wanting to believe in the countless unseen, unmeasurable things she feels. She wants to believe in her own power, like a sixth sense. And then one day she finds that what she’s felt — or, I dare say, known — is true. She finds she is powerful. What then? Perhaps there’s nothing more exhilarating than discovering that.”

In the end, Leah finds her own power not in magic but in the belief in herself. Just as importantly, she finally learns the reason for her mother’s long-ago disappearance. The Strange Inheritance of Leah Fern is a striking first novel from an accomplished writer (Chin has won numerous awards, including the Katherine Anne Porter Prize) and it leaves the reader with the promise of more to come.a

Mike Maggio just returned from Italy, where he produced and directed a bilingual anti-war performance piece, La Guerra è Pace/La Guerra e Pace. A video of the performance can be viewed on his website.