The Rain Heron: A Novel

Despite many strong parts, this fragmented, genre-defying tale makes for an unsatisfying whole. 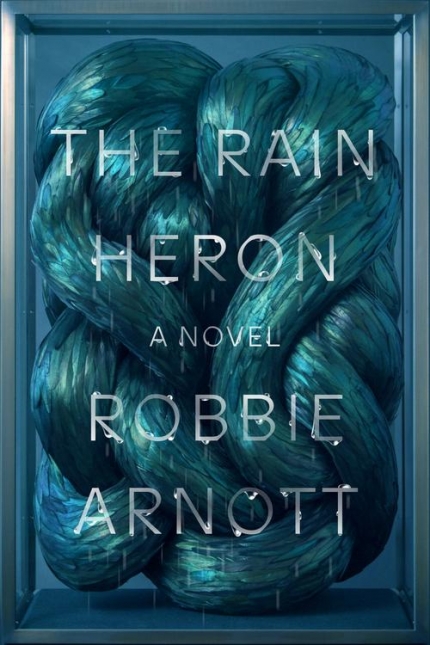 Robbie Arnott is a prize-winning Tasmanian writer who has created in The Rain Heron a phantasmagoric tale in five parts. The chapters are very loosely tied to a mythical bird whose appearance reverses a devastating drought in an unidentified rural land.

The heron is incorporeal, made of water, though it can be netted and caged. Its apparent magic becomes the subject of a deadly hunt by soldiers involved in a local uprising. It’s unclear what the military hopes to do with the bird, but perhaps the heron’s preternatural powers might give them an edge in their struggle. That “struggle” is left to the imagination of the reader, as is much of the storyline, throughout which obfuscation, minimalism, and a creative timeline are mixed with some beautifully honed prose.

Sharing this tale with the bird are three curiously engaging women. Only briefly do we meet the first, a farmer whose land and livelihood are ruined by drought. She is saved when the ethereal bird appears to end the dry spell and become her protector. This woman alone enjoys great prosperity until a jealous neighbor’s boy tries to kill the heron. The boy is found with his eyes plucked out, the drought returns, and the farmer’s prosperity reverts to penury.

We next meet Ren, whose life was ruined and whose son was conscripted by the marauding military resistance. To survive, she flees to a mountain cave, where she stays alive by hunting, trapping, and trading pelts. Ren’s character may remind readers of Ayla in Jean Auel’s The Clan of the Cave Bear, another savvy survivalist.

The third woman, Zoe, lives by the sea, where she and her aunt earn a living milking squid and selling the valuable ink. A stranger intrudes and tries to learn the secret of how to obtain the ink. He ends up unintentionally killing the aunt. Zoe then kills him with the help of a blood-sucking squid, promptly leaves town, and joins the military resistance.

She excels in her new life and is quickly promoted to Lieutenant Harker. While commanding an all-male unit, she is ordered to capture the water heron and bring it to her superiors. Intelligence reports indicate that if Ren can be found, she can lead the soldiers to the mystical bird.

We first meet the soldiers as they’re scouring a mountainous region for Ren, who uses her knowledge of the terrain to avoid detection. Eventually, however, she is found. When she bravely refuses to reveal the bird’s location, she is tortured by the lieutenant until she relents. The bird is caught and caged, but not without a fight. During its capture, one of Harker’s eyes is plucked out.

The bird is taken to the soldiers’ encampment at Ren’s cave, where Ren makes one last attempt to free it. The now partially blinded Lieutenant Harker (Zoe) instinctively shoots Ren in the throat despite never before having aimed a gun at another human.

After the passing of time, the remorseful lieutenant decides to free the bird. She returns to the cave and to Ren, who is still alive but unable to speak because of her injury. Together, the women go to a spot in the mountains and release the water heron. The lieutenant then leaves. She drives to a military doctor’s office to have him examine her gouged eye, and an abrupt fairytale ending ensues.

The author scatters several acts of gratuitous violence amid the pages: the plucking out of eyeballs; the murder of Zoe’s aunt and subsequent killing of her killer; the shooting of Ren; and more. It seems unnecessary for the book as a whole; perhaps each individual bloodstained episode would fit more comfortably into standalone stories.

Much of Arnott’s best writing describes the natural beauty of the unnamed region, the climate, and concern for the environment, though it’s unclear if that qualifies this book as a work of eco-fiction. It could just as easily be categorized as a fantasy, a feminist myth, a murder mystery, or even some sort of Dickensian coincidence tale. Regardless, The Rain Heron tries to span several genres but never quite succeeds in any. While its distinct narratives are interesting, the novel’s puzzling organization left this reader scratching his head.

Paul D. Pearlstein is a retired lawyer learning to enjoy fiction. He praises covid-19 for giving him the opportunity to read with impunity.