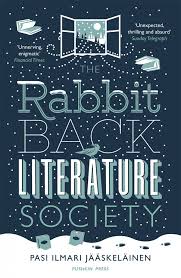 Pasi Ilmari Jääskeläinen’s The Rabbit Back Literature Society is a study in contrasts. Its setting is Rabbit Back, a sleepy Finnish village whose main export has been literary — trolls and elves and other creatures made famous by the fictional author/phenom Laura White.

This small, snowy town, however, harbors elements of darkness: physical violence, psychological manipulation, and deep, dark secrets kept over a lifetime. Likewise, Jääskeläinen’s heroine, Ella Milana, is a seemingly vulnerable young woman who surprises the reader with the methods she uses to plumb the mysteries of Rabbit Back.

An aspiring writer, Ella finds herself stuck at home after university. A string of short-term teaching jobs has led to her living under her parents’ roof once again and substitute teaching at the very high school from which she graduated. Ella’s sputtering career, her diagnosis of sterility, a broken engagement, and her father’s worsening Alzheimer’s all point to a gloomy future.

Her prospects improve, however, when world-famous Laura White selects her as the 10th member of the exclusive Rabbit Back Literature Society. The society has produced the most successful, prominent writers in Finnish literature and had remained at nine members for decades before Laura tapped Ella for inclusion. Fame and fortune await Ella under Laura’s tutelage.

But just as Ella is about to meet her new literary patron, Laura disappears. And we’re not just talking an “I haven’t seen her lately” disappearance; this is a full-scale mystical dematerialization during a freak indoor snowstorm in front of all the guests at the induction ceremony.

As the town searches for Laura, Ella tries to get to the bottom of other mysterious occurrences in the off-kilter hamlet: books from the Rabbit Back Library are changing, rearranging their words when no one is looking, and the librarian (who also belongs to the society) is extremely cagey about the phenomenon when confronted by Ella.

Ella gets a tip that there might previously have been another 10th member of the enigmatic society, about whom no one speaks; various members of the group also introduce her to “The Game,” in which they pull secrets and other difficult information out of each other under a series of bizarre and ritualistic rules — rules that do not exclude violence.

Ella might seem passive, but she begins to reveal her edge when she decides to make use of the Game to simultaneously solve the mysteries and further her own literary career.

Jääskeläinen’s light/dark duality winds throughout the novel, alternately charming the reader with enchanting descriptions of the village:

“Now, at fifty-five, Paavo Emil Milana spent his days sitting in the back garden among the grass and daisies and nettles, the currants and apple trees, the frogs, hedgehogs, bugs and butterflies. His garden season started as soon as the snow melted and didn’t end until the first frost.”

And then startling with instances of cruelty:

“Ella took hold of Ingrid’s lower lip. Then she twisted it until the woman let out a high-pitched cry of pain. A drop of blood rolled down her chin. ‘All right,’ Ingrid said, mollified and a little frightened. ‘You understand Rule 21. So let’s play.’”

While misfortune may lurk behind garden trolls’ smiles, Jääskeläinen never veers into straight horror or despair. He has a talent for making observations about painful milestones in human life in a droll manner that renders them somewhat more palatable:

“After several nights spent thinking about her father’s case, she had developed a theory that the problem was a mathematical rather than a moral one. It wasn’t right to drive your own husband or father from his home and put him in an institution unless it happened to be unavoidable. As time went on, however, the individual by the name of Paavo Emil Milana was less and less the Paavo Emil Milana that she and her mother knew, and more and more some other person that Ella wasn’t particularly eager to get to know. Once her father’s share dropped below a certain percentage, it would, according to Ella’s theory, be time for him to part with the rest of the family and move away.”

I would be remiss not to acknowledge translator Lola M. Rogers for her clean, deft work here. Her translation flows naturally, while retaining eddies of non-native cadence to give the reader some flavor of the book’s original Finnish.

The Rabbit Back Literature Society is ideal for those who appreciate quiet and quirky tales with elements of whimsy and darkness all in one. The action is mostly psychological, so readers who need large, world-altering stakes or a faster pace might be tempted to drift away from the quaint burg in the first half. But the pace picks up in the second half, and for every secret revealed, a new question pops up.

Even when it feels like things are winding down, and all the loose ends will be tied up a little too neatly, Jääskeläinen doesn’t go for the easy finish. In the town of Rabbit Back, as in life, some mysteries keep on swirling with the snow.

Tara Campbell is a Washington, DC-based writer of crossover sci-fi. With a BA in English and an MA in German Language and Literature, she has a demonstrated aversion to money and power. Her stories have appeared in Lorelei Signal, Punchnel's, GlassFire Magazine, the WiFiles, Silverthought Online, Toasted Cake Podcast, Litro Magazine, Luna Station Quarterly, Up Do: Flash Fiction by Women Writers, T. Gene Davis's Speculative Blog, Master's Review, Sci-Fi Romance Quarterly, Latchkey Tales Elementals: Children of Water and Magical: An Anthology of Fantasy, Fairy Tales and Other Fiction for Adults. Find her on Twitter at @TaraCampbellCom.