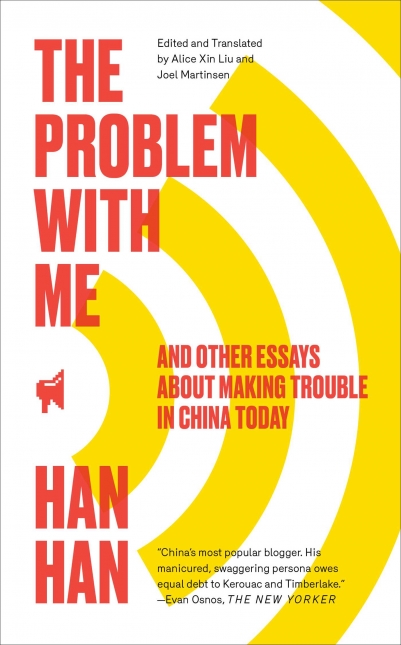 In the translators’ introduction to Han Han’s collection of essays, The Problem with Me, we come to know this young, influential writer is speaking for “a new generation of troublemakers and dissidents, young people [in China] unhappy with the status quo.” And “central to enjoying Han Han’s writing is his sense of humor.”

But it becomes difficult at times to read his work through a lens of satire or wit when his language leans heavily toward judgment and narrow-mindedness. For example, “The Chinese education system is terrible because the teachers are terrible.” Or, “Poets think that they’re superior to other people.”

There is danger in painting everything and everyone with such broad brushstrokes. But Han seems unconcerned with the idea of taking such risks. In fact, he writes, “For a real writer, recklessness is very important.” To be reckless is to be unconcerned about the consequences of one’s actions, to proceed without caution, to be careless.

Perhaps one might want to consider such credentials when reading this collection of essays, ranging in topic from governing to policing to intellectualism, from history to culture and tradition.

It is one thing as a writer to voice an opinion, but to attempt to state that opinion as fact, in the absence of statistics or sources or context, is both arrogant and self-serving. Good writing is grounded in research and data. And good writing tells the full story. There is a slant to Han’s writing, a one-sidedness that may be fine for his audience of twenty- and thirty-somethings who are discontented, even angry, with Chinese culture and politics today. But, for a wider audience, that slant is…well, reckless. And too often it comes across as smug.

Perhaps he could learn a lesson or two from Andre Dubus III, who reflects on his own writing in this quote I’ve found to be both inspirational and honest: “Most of the time I feel stupid, insensitive, mediocre, talentless and vulnerable — like I’m about to cry any second — and wrong. I’ve found that when that happens, it usually means I’m writing pretty well, pretty deeply, pretty rawly.” It is nearly impossible to find that kind of humility and vulnerability in Han’s essays.

What you will find, though, is chauvinism. There are subtle instances throughout, but there are two instances in particular where the misogynistic language is so obvious that it is troubling. The first coincides with Han’s above comment about poets. “Writing prose is writing prose, but when it comes to getting young female literati into bed with you, prose writer isn’t as effective as poet.”

The second instance is from “On His Daughter,” part of an interview with the Beijing Youth Weekly where Han makes it clear that, beyond being happy and having good character, he has few expectations of his daughter. Yet, were he to have a son, he would be expected to “work hard for himself and in order to change society, to fight to build a safe environment for the daughters of the world.”

And, when the interviewer responds, “Some people will no doubt suspect that you have serious male chauvinist tendencies, and that you think of girls as weak,” Han says, “Isn’t that the case? People have all sorts of roles the world over, but some things are simply the way they are. In many areas, like walking on a dark road in the middle of the night, or in athletic competitions, girls suffer. I’m a protector of girls. I don’t want my wife to go out to work, and I want to protect my daughter. If you want to call that male chauvinism, then I’ll admit to it.”

The only positive spin in all of that is that he at least has the insight to admit to being a chauvinist, though in so doing he doesn’t seem too concerned about alienating female readers who may be offended by this. But, again, to be reckless is to be utterly unconcerned about the consequences of one’s actions.

There are far too many more examples of this kind of recklessness throughout Han’s collection. His endeavors to be witty and satirical fall short for me. In his attempts to be provocative or controversial, however, he does succeed. But, still, there is a line where writing that is thought-provoking lurches toward offensive and insulting. It is obviously up to the individual reader to decide if they think Han has crossed that line in this collection, because, of course, it would arrogant and self-serving of me to state my opinion as fact.

Kristina Moriconi is a poet and essayist whose work has appeared in a variety of literary journals and magazines including Brevity, Superstition Review, and the Nervous Breakdown, as well as many others. She earned her MFA from the Rainier Writing Workshop in Tacoma, Washington. She lives in the Philadelphia area and teaches writing in the local community. Moriconi also teaches in the Creative Writing MFA Program at Rosemont College.