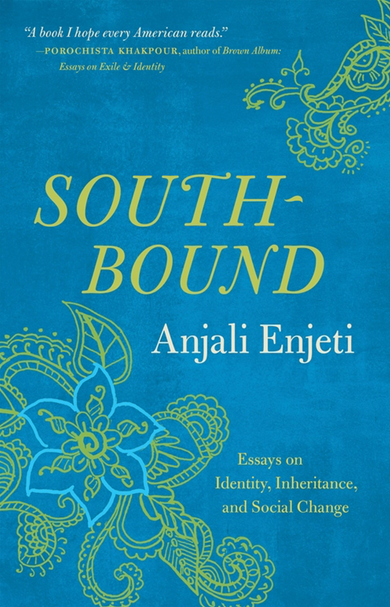 A maroon and wood-paneled Plymouth Volare station wagon cruises south down Interstate 75. Starting in the Detroit suburbs, the trip brings a family to their new home. Dad has gotten a new position as a doctor, and Mom wants to be closer to her sister. But not everyone is happy. The young daughter, Anjali, remembers feeling like she “was sliding down the chute in a game of Chutes and Ladders. Despite digging my heels in, I still reach the bottom.”

The bottom, in this case, was Chattanooga, Tennessee. In the early 1980s, when Enjeti’s family arrives, it has cotillions, churches aplenty, and the Confederama, a museum and gift shop with “two faux towers” and trinkets for sale emblazoned with the “Stars and Bars.” It does not have, as fifth-grader Enjeti soon realizes, any brown children in her school other than herself.

Enjeti’s father is from Hyderabad, India, and her mother is Puerto Rican and Austrian. She befriends the only Black student in the class; her white teachers and classmates seem suspicious of her and ask, with seemingly interchangeable incredulity, if she’s a Yankee or from the Third World.

It’s here that Enjeti starts Southbound, her essay collection exploring her relationship to the South and how it’s shaped her. In it, she shares family stories, political analysis, and literary criticism. Taken as a whole, it maps her journey to understand how “individual identity can lead to an exterior energy.”

Now living in a suburb of Atlanta, Enjeti has spent the last few years dedicating that energy to progressive political organizing within Asian American communities in Georgia. As she notes, the Asian American and Pacific Islander (AAPI) population was the fastest-growing group in the South from 2000 to 2010. After the shock of the 2016 presidential election, Enjeti got involved in Democrat Jon Ossoff’s congressional campaign and started organizing Asian American voters. Many of her essays cover the effects of voter-suppression efforts on Georgia’s Asian population.

Enjeti makes clear that such discrimination is not new in America. That becomes movingly apparent in her essay on Vincent Chin, a Chinese American man beaten to death by two white Detroit autoworkers in 1982. The essay is written in 19 fragmentary sections; some are directly about Chin and his family, while others build an almost legal indictment (Enjeti started off her career as an attorney) from the research she compiled documenting the United States’ historical mistreatment of Asian Americans.

Enjeti was a child still living in Detroit when the murder occurred. “This is where, for the first time, I learn about injustice,” she writes. Although the essay was written before the killings of six Asian women in the Atlanta suburbs last month, Enjeti’s commemoration of Chin’s life provides both solace and a call to action during the current time of rising violence against Asian Americans.

The priest and civil rights leader Pauli Murray once wrote that “one person plus one typewriter constitutes a movement,” and Enjeti’s writing is clearly a critical piece of her work for the social change noted in the book’s subtitle. But an activist’s rallying cry can also be a writer’s crutch. Though Enjeti gives personality and knottiness to her and her family’s stories, others profiled in the collection can seem blandly representative of a point, not a person.

In her more intimate essays, she lets herself feel free to be ambivalent, exasperated, questioning, and inspired. But then passages will drift toward a pious recitation of certain political catechisms repeated almost verbatim from essay to essay. At those moments, she sounds constrained and careful, but also less like herself. Those stuffy little cotillions and tacky Confederate fantasy museums are stories the (white) South tells itself. Being able to tell her story, in all its complications and nuance, is contrast enough to the staid scent of ol’ magnolia and moonlight. And more interesting, too.

And Southbound does represent a new, welcome turn in Southern writing. For all its portrayals as a place of implacable folkways, the South has long been impacted by questions of movement and change. One of the best books of nonfiction in the past 20 years, Isabel Wilkerson’s The Warmth of Other Suns, documented the Great Migration of Black Southerners away from the South in search of opportunity and an escape from oppression. And one of the most controversial books of this year, The Devil You Know, by New York Times columnist Charles M. Blow, advocates a return of Black Americans to the South.

But Enjeti writes not as someone returning, but as someone arriving. The American South, for most of its existence, never attracted the vast numbers of immigrants or migrants like the Northeast, Midwest, or West Coast did. It was only relatively recently that great movements of people chose to come to, rather than flee from, the former Confederacy. To put perhaps too fine a point on it, the questions — and people — are no longer black and white.

As Enjeti outlines in a chapter on Southern literature, the South is now full of stories of Cambodians in Louisiana, Venezuelans in Tennessee, and Iranians in Texas. The question for writers is no longer whether to stay or go, but rather, “Why I am here? And what is this place?” Southbound is an intriguing attempt to provide an answer.

The Last King of America